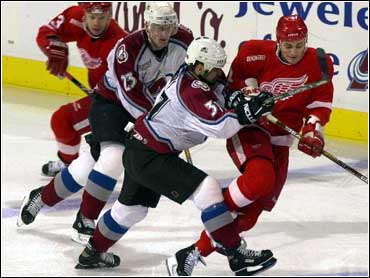 Brendan Shanahan scored his eighth game-winning goal of the season, capping a rally from a three-goal deficit as the Detroit Red Wings beat the Colorado Avalanche 4-3 on Sunday night.

Shanahan had the decisive goal, his 29th, at 16:07 of the final period. After Sergei Fedorov got the puck airborne on an apparent attempt to dump it into the Colorado zone, Shanahan chased after it and beat defenseman Martin Skoula and goalie Patrick Roy.

After falling behind 3-0 midway through the second period, Detroit got second-period goals from Fedorov and Darren McCarty. Pat Verbeek tied it at 12:11 of the third period.

Detroit's Chris Osgood had 22 saves, and Roy finished with 32.

It marked the first time this season that Detroit had won after trailing after two periods; the Red Wings had been 0-12-1 in such situations. It was Detroit's third straight come-from-behind victory over Colorado this season, however.

Colorado didn't get its first shot on goal until more than seven minutes into the game and was outshot 10-2 before Drury scored on a power play at 11:20.

Drury scored his 17th goal on a shot from the point that ricocheted off Osgood's left ribs.

On the ensuing faceoff, Detroit's Martin Lapointe slugged Colorado's Jeff Odgers, then dropped his gloves and stick and drew a two-minute penalty for roughing, but the Avalanche couldn't convert. Moments after returning to the ice, Lapointe leveled Odgers with a blindside hit along the boards.

In a 4-on-4 situation midway through the second period, Colorado rookie Alex Tanguay made it 3-0 at 9:35, pushing the puck past defenseman Steve Duchesne after Chris Chelios failed to clear it from the left boards.

Just 17 seconds later, Fedorov countered, scoring on a backhander from the slot on a pass from Duchesne at 9:52. Then, at 12:15, McCarty, returning to the ice after missing 39 games following hernia surgery, tipped in Duchesne's shot.

Roy later made a pad save on a breakaway by Fedorov.

Verbeek tied it from in front of the goal after taking a pass from Nicklas Lidstrom.