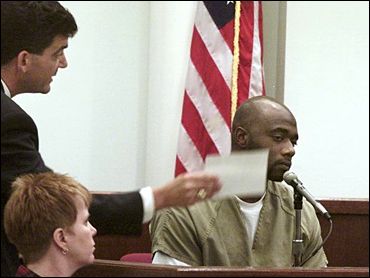 Clete Jackson didn't know what to expect when he walked into the garage of his former lover, who was sobbing. He saw a man's mangled body almost completely inside her car — head on the floorboard, torso in the air and a severed leg on the center console.

"She was like, `I hit somebody, and he's still in the car,"' Jackson testified Tuesday in the murder trial of Chante Jawan Mallard, accused of running down a homeless man and driving home with his body grotesquely lodged through her windshield. She pulled into her garage and sat in the car and cried, repeatedly apologizing to the man who was moaning, police say.

Mallard, 27, faces life in prison if convicted; testimony was to resume Wednesday morning. Her attorneys do not dispute that she hit Gregory Biggs, 37, but say it was an accident, not murder.

Jackson testified that after Mallard showed him the car several hours after the Oct. 26, 2001, accident, the two drove to the apartment of Titilisee Fry, with whom Mallard drank and took drugs shortly before hitting Biggs. They discussed what to do.

"I said, `We ain't going to burn nobody.' We're going to put him somewhere so his family can find him so they can bury him, because it was an accident," said Jackson, his voice sometimes quivering.

The group decided to dump the body in a park.

That night Jackson and his cousin, Herbert Tyrone Cleveland, went with Mallard to her house. Jackson said he apologized to the lifeless Biggs as he spread a blanket on the garage floor and extracted the body.

Jackson and Cleveland have pleaded guilty to tampering with evidence in exchange for their testimony at Mallard's trial. Jackson was sentenced to 10 years; Cleveland, nine years.

Jackson said Mallard had borrowed a car and picked him up before 9 a.m. on Oct. 26, 2001, some six hours after she struck Biggs on a highway and drove home with his bloody body lodged in the windshield.

Jackson said he had only been out of jail a few months after serving a two-year prison sentence for burglary when Mallard sought his help. He said he didn't want to, but did because he believed it was an accident.

"You don't hit nobody on purpose that you don't know," said Jackson, wearing a brown prison uniform.

Jackson also said the Ecstasy that Mallard took the previous night seemed to remain in her system the next day. She "was in a zone," was crying uncontrollably and even threatened to commit suicide, he said.

Prosecutors say Biggs, a former bricklayer and father of one, would be alive had Mallard helped him, reports CBS News Correspondent Bob McNamara.

Max Courtney, lab director of Forensic Consultant Services, said he found small blood drops in the compartment between the car's two front seats — which indicated Biggs was alive after he was hit.

"If I have blood in my mouth and I cough or wheeze fairly forcefully, I could produce such a bloodstain," Courtney said.

A Fort Worth Fire Department captain and an emergency room doctor also testified that Biggs — who suffered multiple broken bones — could have survived if he had received medical attention.