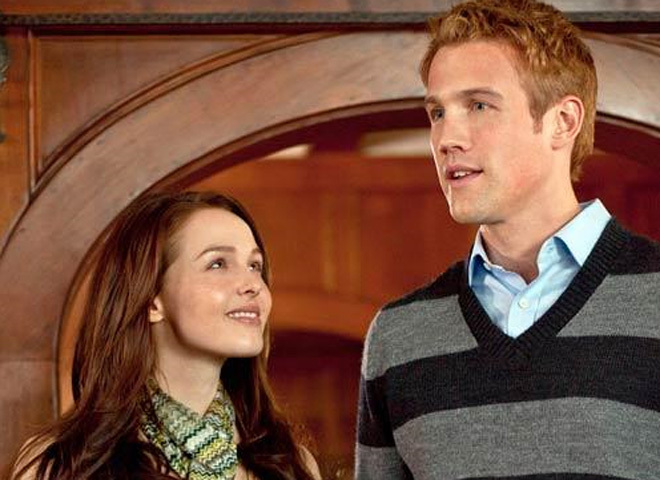 (CBS/AP) - Critics are saying the Prince William and Kate Middleton made-for-TV movie is so bad that it may end up being a huge hit.

The Guardian's Stephen Bates writes Friday that "William and Kate: The Movie," which will air on Lifetime on April 18, is "awful, toe-curlingly, teeth-furringly, pillow-bitingly ghastly."

"You begin to wonder what the happy young couple have done to deserve this," he says, adding," It will probably be a smash."

The low-budget, rushed-to completion movie chronicles the university romance of the royal couple, who in real life met and fell in love while studying at the University of St. Andrews in Scotland.

London Evening Standard critic Richard Godwin described the movie as a "classic" and said American critics "panned this movie as a cheesy chick-flick" but predicted the English will end up cherishing it because the movie is so outlandish.

"It is recognizably a film, in that it takes place on a screen," he said. "Events run in a forward direction."

The movie was directed by Mark Rosman and produced in the five months since the couple announced their engagement last November.

Critics have not been impressed with Rosman's ability to capture the nuances of Britain's eccentric, distinctive royal family.

The Guardian pointed out that the movie was shot entirely in the Los Angeles area, with poorly done British accents, countryside scenes that looked like California instead of Britain, and London buses driving, incorrectly, on the right side of the street. The acting was described as wooden or worse.

But that won't stop if from debuting in the United States on Lifetime on April 18 and in Britain on Channel Five on April 24. After that, the movie is to be sold as a DVD, possibly finding a niche among the legions of royal wedding memorabilia collectors.

It stars New Zealander Nico Evers-Swindell playing a dashing version of Prince William in love and Camilla Luddington, whose limited screen credits include playing Tiffany in "Days of Our Lives." She portrays Middleton as a highly emotional young woman determined to snag a prince no matter what the obstacle.

Much is made in the film of the unlikelihood that William would ever marry a commoner.

The film documents key points in their budding relationship, including the scene where Middleton catches William's eye at a fashion show wearing a see-through dress, prompting the future king's alleged quote to friends, "Kate's hot!"

When a friend warns her she won't have a chance with William, the actress playing Middleton gives the camera a smoldering look and says "He's just a guy."

Tell us: will you watch "William and Kate: The Movie?"