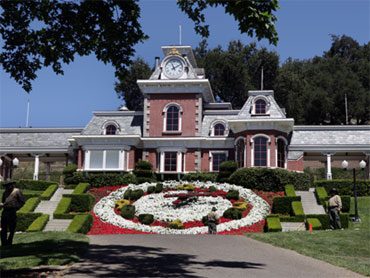 The former home of the King of Pop could become California's latest state park under an idea being floated by a California state lawmaker.

Assemblyman Mike Davis said Tuesday that he believes it's worth studying whether the California Department of Parks and Recreation should take over the Neverland Ranch in Santa Barbara County.

The Los Angeles legislator said fans from around the world would visit Michael Jackson's former estate.

Jackson's 2,500-acre estate once housed amusement park rides and a zoo with tigers and snakes, but many of the estate's attractions were dismantled or sold after his death in 2009.

That company now co-owns the estate with the Jackson family. Colony spokesman Owen Blicksilver declined to comment on the proposal.

The success of the proposal is uncertain in a state where the budget deficit stands at $19 billion. Gov. Arnold Schwarzenegger previously proposed selling the state's landmark buildings to raise cash to cover the shortfall.

"Given that we have an economic shortfall ... I suspect it would be difficult for the State Parks Department to purchase the property alone," Davis said. He would propose a public-private partnership.

Davis said the plan remains only an idea at the moment and that he might introduce a bill or resolution on the matter after lawmakers return from their monthlong recess in August.

"I am committed to finding out all the details possible to make this a good proposal," Davis said.

He also said NAACP president Alice Huffman and others approached him with the idea. Huffman's office did not immediately return a call Tuesday.

It's not clear how the state would pay for even part of the ranch or ongoing costs to maintain and operate it, given recent budget cuts to the Department of Parks and Recreation.

Last year, Gov. Arnold Schwarzenegger proposed closing 220 of California's 279 state parks to save money, but later backed down. Instead, he and lawmakers agreed to close half the parks on certain days and reduce services.

In November, Californians will vote on a ballot initiative that is designed to provide stable funding to state parks by imposing an $18 surcharge on vehicle license fees. If it's approved, vehicles with California plates would get free park admission.

Calls to the California State Parks Foundation and Republican lawmakers also were not immediately returned.

There are other signs that the proposal could be short-lived. About a year ago, residents of nearby Santa Ynez Valley organized a group to oppose any plan to turn Neverland into a tourist attraction.

It was at Neverland where authorities alleged that Jackson had molested a boy. Jackson was acquitted in 2005 and moved out of the property.

Davis said controversies surround many public figures and noted that Graceland, the former home of Elvis Presley, focuses on Presley's work, not issues in his personal life.

An attorney for matriarch Katherine Jackson did not immediately respond to a request for comment.