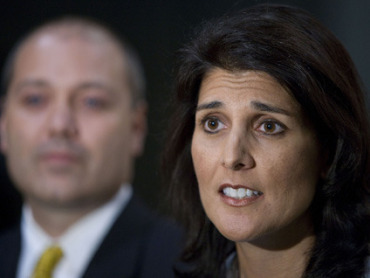 Prominent South Carolina blogger Will Folks is endorsing Republican Nikki Haley for governor -- even as he stands by his claim he had an affair with the married candidate.

Haley will face off against Rep. Gresham Barrett in a runoff next week for the Republican gubernatorial nomination. In a primary earlier this month that included two other candidates, Haley was the clear frontrunner, and she is expected to win next week despite of multiple allegations that she had extramarital affairs.

Folks blogged last month that he had an "inappropriate physical relationship" with Haley several years ago, when she was married and he was not. After that, lobbyist Larry Marchant also claimed to have had an affair with her. Haley denied both claims, and they do not appear to have hurt her popularity.

Folks' blog Fitsnews.com wrote today that "we know for a fact that S.C. Rep. Nikki Haley is lying through her teeth every time she denies our founding editor's claim that she had an 'inappropriate physical relationship' with him in the Spring of 2007. On top of that, we also know for a fact that her political career could very well go down in flames if (and more likely 'when') this ticking time bomb goes off."

Still, the blog says it is endorsing Haley because of her fiscal policy.

"It's about the hundreds of millions of dollars that will likely be saved as a result of her winning the general election in November," the blog said. "The bottom line for S.C. taxpayers is that Haley would vote the right way on the S.C. Budget and Control Board, use her veto pen to reduce the size and scope of government and sign a universal parental choice bill which would (at long last) provide parents with real options and our flawed system with real, market-based accountability."

The blog continues that a candidate lying about their personal life is a "damn good reason" to vote against them, but it compares the situation to the Monica Lewinsky scandal during the Clinton presidency.

"Our favorite modern-day president - Bill Clinton - clearly lied about the fact that he had sexual relations outside the bounds of his marriage," the blog said. "But Clinton also cut our capital gains taxes, pushed for free trade and worked with Republicans to pass welfare reform (which President Barack Obama unfortunately overturned last February)."

Haley has managed to maintain her establishment support, as evidenced by this new video from the Republican Governors Association that features a glimpse of Haley at the 32-second mark.