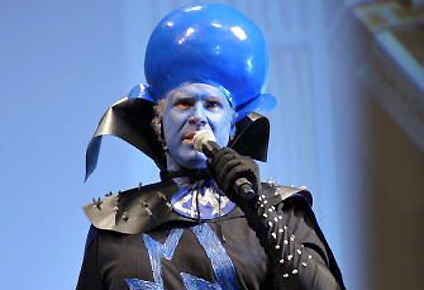 NEW YORK (CBS) Although Brad Pitt was a no-show at the "Megamind" Comic-Con panel, his co-star Will Ferrell provided enough entertainment for the both of them.

The funny man kicked-started the annual event and created a roar after he stepped onto the convention stage Thursday dressed as his villainous character from the upcoming DreamWorks animated flick.

Sporting blue face paint, a handmade blue helmet and black cape, Ferrell entered the packed Hall H with a box of doughnuts and a jug of orange juice.

He was joined by co-stars Tina Fey and Jonah Hill, who both were in street clothes.

But no one could forget that Pitt voices the muscle-head hero in "Megamind." He stood alongside his co-stars in cardboard cutout form.