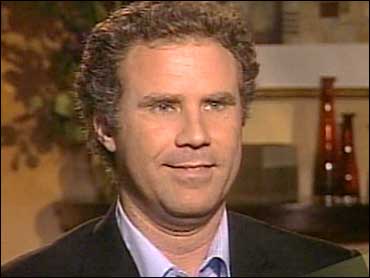 After his unforgettable streaking scene in "Old School" and the runaway holiday hit, "Elf," TV's "Saturday Night Live" alumnus Will Ferrell is back on the big screen again.

This time, he obliterates the news business in his funny movie "Anchorman: The Legend of Ron Burgundy," which opens nationwide July 9.

In it, Ferrell plays Burgundy, San Diego's No.1 anchorman in the 1970s, when budding feminism brought super competent female competition into the newsroom. Ferrell co-wrote the script with "SNL" writer Adam McKay.

In a lighthearted interview with The Early Show co-anchor Harry Smith, Ferrell called the movie a "docu-drama."

"I'm thinking Michael Moore meets the news business, and throw in a little 'Poseidon Adventure,' too, because there are danger elements," Ferrell jokes.

The comedian says he has seen many Ron Burgundys over the years: "I was - for some reason, don't ask me why - little news [junkie]. I remember watching Walter Cronkite as a 7-year-old. And really enjoying the ritual of 6 o'clock, watching the news, getting the information from a trusted face, voice, presence."

When Smith and Ferrell first met, the actor was part of the "SNL" ensemble cast and when asked when he was going to leave the TV show, Ferrell said he didn't want to be the guy sitting in the parking lot.

Asked about that again, Ferrell said, "I guess I'm not in the parking lot, visiting the old high school."

Since leaving "SNL" in 2002, Ferrell has had leading roles in several hit movies including "Elf" and "Old School." He is scheduled to star opposite Nicole Kidman in "Bewitched," which is due out in 2005.