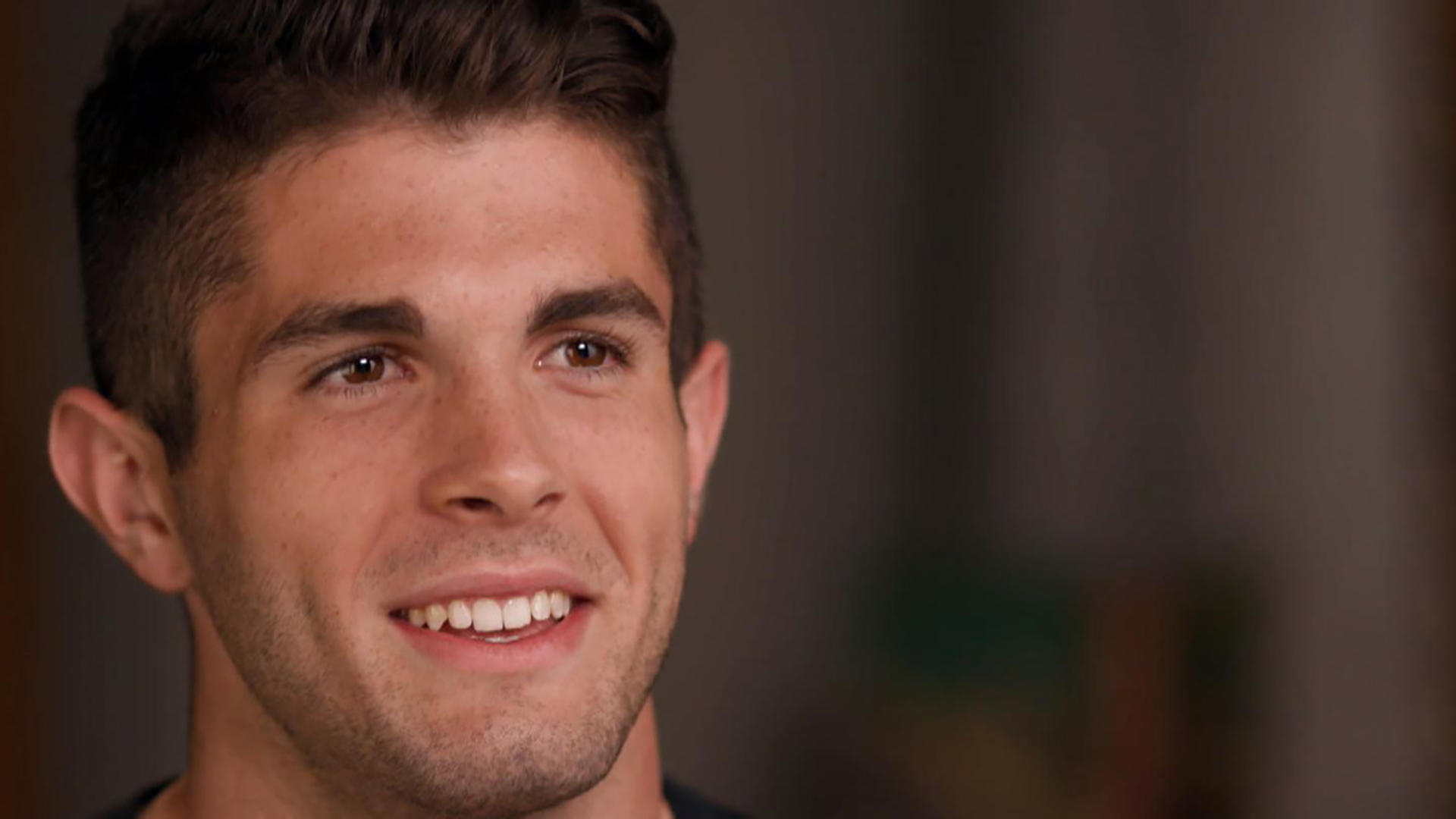 The biggest soccer stars in the world are known by one name: Pele. Ronaldo. Messi. The United States has never produced that kind of world-class talent, but a 19-year-old from Hershey, Pennsylvania, is poised to change that. Christian Pulisic is not only the youngest player on the U.S. National Team, he may just be the best American to ever play the game. This week, Pulisic will play with Team USA as it tries to qualify for the World Cup. For the last two years, he's been playing professionally with one of the most revered clubs in Europe. We spent time with the young American in Germany where he is already a household name.

When 80,000 fans scream your name, you better deliver. This is Dortmund, Germany. Anyone who says that Germans are not emotional has never stood at the base of Dortmund's south stand. It's called "the yellow wall." 25,000 thousand fans bounce along with the ball from misery to euphoria, a collective, manic mood swing that would put most teenagers to shame.

"It makes you think that this is gonna be perhaps the first American superstar in the sport."

The yellow wall lives by two rules: no sitting in the stands, and no excuses on the field. Even if you are a shy 19-year-old 4,000 miles from home.

Christian Pulisic: Yeah. It's really loud. You can't hear your teammates from 10 yards away, trying to talk to you.

Sharyn Alfonsi: Is it intimidating, at all?

Christian Pulisic: It is intimidating at times. But I think, as you gain experience, and after I played more and more games, it just gets easier and easier.

He certainly makes it look easy. Christian Pulisic was 17 when he scored his first goal for Dortmund. The youngest American ever to score in the German pros. He celebrated like any teenager would: with a dab.

Sharyn Alfonsi: How do you say "dab" in German?

Christian Pulisic: Dab, it's the same.

What makes Christian Pulisic special, and so fun to watch, is his explosive speed. His passing ability can seem clairvoyant at times. And he can shoot like a sniper. At 19, Pulisic has scored as many professional goals as Lionel Messi – the world's greatest player -- had when he was 19.

Sharyn Alfonsi: Do you feel like people are expecting you to be the next Messi?

Christian Pulisic: I think it's what American fans, soccer fans do, especially. They're looking for the next star, the next player to be the face of U.S. soccer and all the stuff I hear every day.

Four million American kids play youth soccer, more than in any other country. But the U.S. men's team has never produced an international superstar and never made it to the finals of the World Cup. This year, the team is struggling to qualify. They were 0 and 2 when Bruce Arena was named coach in November. One of his first moves was to unleash Pulisic and build the game plan around him.

Sharyn Alfonsi: What did you think when you saw him play in person?

Bruce Arena: First of all you don't think he's an American.

Sharyn Alfonsi: And that's a compliment.

Bruce Arena: It's a compliment. He looks like a natural on the field and he moves gracefully, he's strong for his size, his speed is incredible, his first touch is good.

Pulisic is a game-changer. Watch as he dances around defenders and somehow finds a teammate for a goal. He has either set up or scored 9 of the USA's last 11 goals.

Bruce Arena: It makes you think that this is gonna be perhaps the first American superstar in the sport.

Sharyn Alfonsi: You're willing to say that?

Sharyn Alfonsi: A lot of people are hedging.

Bruce Arena: You have to be hesitant about this but this is a very talented young man.

Kelley Pulisic: Sometimes, I'm laying in bed at night and thinking "Wow, this is really happening" and you really don't feel like it's real.

Sharyn Alfonsi: There was never a master plan?

Mark Pulisic: No, there's no master plan. Not even close.

Mark and Kelley Pulisic met at George Mason University where they both played soccer. Mark is a professional coach. Kelley just retired as a phys-ed teacher. They have three children -- Chase, Dee Dee and Christian -- their youngest.

Kelley Pulisic: Everything he does has to be at a very high level. He doesn't like to fail. And he wants it to be perfect. When he was two years old he would color. And he would color out of the lines and just flip out. And I'm thinking, "What's wrong with this kid?" And basically I didn't want to color with him anymore. And what had happened was I bought white-out for a two-year-old. And he would get the white out and go around the edges to make it perfect. I've never seen anything like that. I have two other kids and I'm thinking this isn't normal. And that's like his personality in a nutshell, at two years old he had to keep in the lines.

He became obsessed with soccer and before he started kindergarten had mastered one of the sports most difficult skills: playing with both feet. He'd play for hours in the yard. When his parents finally coaxed him inside for dinner, he'd pass under this sign -- confidence -- the one-word Gospel according to Mark.

Mark Pulisic: He was always playing up against older kids so I said there was only one thing you can never lose -- you always have to play with confidence. That you belong. So I wrote it up there. I did a spell check first to make sure it would be spelled properly.

Sharyn Alfonsi: So you would have full confidence!

Mark Pulisic: Because I knew it would be there.

The boy wonder ran circles around older kids all over Pennsylvania.

Kelley Pulisic: He was really small. And I'd hear people going "Oh, who brought their little brother? Oh, they probably didn't have enough players -- somebody's little brother is out there."

Kelley Pulisic: And then the game would go on and he'd get the ball and do something and I'd just kind of giggle because they were like, 'Oh look at that little kid!' Someone mark him, cover him!

By the time he was 12, pro-scouts around the world noticed him too.

Kelley Pulisic: We would get calls constantly. 'Oh can Christian play with us' and we really had to find the balance of what was too much.

Mark Pulisic: And I just think what we just did differently was made sure that we didn't put him in a structured environment all the time. He played for one team. He would practice twice a week and play a game on the weekend.

Sharyn Alfonsi: You hear stories about these parents who are doing thousands of miles in their car taking their kids everywhere, special coaches, special diets, backyard workouts.

Mark Pulisic: You didn't do that with Christian? You didn't keep him on a gluten free, fat-free diet?

Mark Pulisic: After games we were more Slurpees and Doritos, right?

The Pulisics decided to see if Christian could cut it in one of the most competitive leagues in the world. At 16, he signed with Dortmund, a club that has a reputation for building stars.

Sharyn Alfonsi: Why do you have to come to Germany to play? Obviously there are a ton of teams in the U.S. that would love to have you?

Christian Pulisic: As a kid, I just always learned that if you want to be the best, you have to play against the best.

Pulisic's father moved with him and enrolled Christian in a German high school.

Christian Pulisic: I remember going in the first day and the teachers would start talking to me in German. And then the other kids would say "He doesn't speak German" and then I'm thinking to myself "How is no one aware of that?"

Kelley Pulisic: He calls me after his first day of school, "Mom, mom." "Hey what's up Christian?" "I went to school today. I sat in a class. I don't know what class it was."

Sharyn Alfonsi: Was he a little lonely at first?

Kelley Pulisic: It was very lonely.

Sharyn Alfonsi: And what would you say to him?

Kelley Pulisic: I said Christian what do you want to do? Do you want to stay? I said because believe it or not it would be a lot easier for you to come home on everybody. "No, no, no Mom I don't want to come home."

Dortmund is a blue-collar town with rusted steel mills and a Pittsburgh feel, right down to the team colors. On match day the exodus from the streets to the stadium is lubricated with beer and bratwurst.

(PULISIC) Before the game, even, you're still in the locker room and you hear them singing, "You'll never walk alone," and it kinda just goes throughout the whole stadium. And you feel it and it just gets you really pumped.

(PULISIC) Overwhelming. Just when I saw his back, number 22, going onto the field, like, I can't even--

(PULISIC) I can't describe it.

Pulisic has been embraced by the notoriously unforgiving Dortmund fans. Partly because he's become fluent in German, it took him a year, but mostly because he mastered their precise style of play. To sharpen his skills Dortmund uses this. The club's creation called "the footbonaut." It is German engineering at its most twisted. Balls are fired as fast as 60 miles an hour, Christian's job is to hit the randomly lighted squares.

Mark Pulisic: He doesn't like it when I say it, because I've been a coach my whole life and those players never succeed, you know? They're flashes in the pans.

Mark Pulisic did cave a bit on flash when his son, who earns more than $8 million a year, begged to fly from a national team practice in Kansas City to join his friends at Hershey high's senior prom.

Sharyn Alfonsi: How'd you get there?

Christian Pulisic: I took a private jet. Looking back at it it's a little weird. I can't believe I did that.

Sharyn Alfonsi: You probably blew through your whole allowance, right?

Christian Pulisic: Yeah, maybe. I don't regret it, though.

After partying all night, he flew back and scored his first goal for Team USA.

That goal ignited the hopes of U.S. soccer fans hungry for a world-class player. We saw it this summer. We were with him in Hershey. He was invited to sign a few autographs. This is the line that was waiting for him.

Sharyn Alfonsi: There's no way he'll ever get through all these kids.

Pulisic was enjoying some of the benefits of fame, but his mother said don't be fooled by his smile.

Sharyn Alfonsi: What do you think this is like for Christian?

Sharyn Alfonsi: What do you say to him before something like this?

Kelley Pulisic: Oh, I just, I-- I just, it's like, "Get your game face on." Because you know, he's gotta go and he's gotta play the part, and it's almost the same as I say before a game. So he's gotta prepare for this.

No soccer academy can prepare you for this. Remember he's 19. Really, he just wants to play. Whether it's a pick-up basketball game, or showing-up his teammates. Moves like those and his boy next-door looks make him a marketers dream. Pulisic already has deals with Nike, Gatorade and you guessed it -- Hershey Chocolate. Top European teams want a piece too. They've offered Dortmund as much as $40 million for the young American.

Free diver Alexey Molchanov: The king of the deep