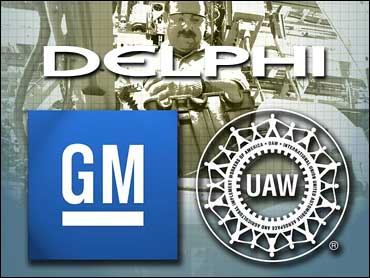 More than 125,000 hourly workers of General Motors Corp. and auto supplier Delphi Corp. are being offered buyouts or early retirement to help cut hefty labor costs. But industry analysts warned that the plan released Wednesday may not be enough to restore the companies' financial health or avoid a paralyzing strike.

About 80 percent of GM's 19,000 employees in Ohio are hourly workers at plants in Moraine, Lordstown, Toledo, Mansfield, Parma, Defiance, Cincinnati and Columbus. Delphi employs about 13,000 workers in Ohio at plants in the Dayton, Warren, Columbus and Sandusky areas.

Wednesday's deal marks a major concession by union workers to help GM survive and overcome its crushing obligations, but it comes with no guarantee, Regan reports.

Union workers are represented by the UAW, the International Union of Electronic Workers-Communications Workers of America and the United Steelworkers Union.

The deal comes at a critical time for GM, which last week increased its reported loss for 2005 by $2 billion, to $10.6 billion. The world's largest automaker has been losing U.S. market share to Asian automakers and is saddled with labor agreements that make it difficult to close plants or cut workers. The plan also is crucial for Delphi, the largest U.S. auto parts supplier, which is reorganizing in bankruptcy court after filing for Chapter 11 protection in October.

The companies made no predictions of how many employees might accept the offers or exactly how much they would save in operating costs. GM has a goal of cutting 30,000 hourly jobs by 2008.

Under the plan, GM would pay for the Delphi early-retirement incentives and assume some post-retirement benefits for Delphi employees who go back to work for GM. GM spokesman Dan Flores said the automaker didn't yet know the full cost of the plans, since it's unclear how many workers will participate.

Keith Crain, editor and publisher of Automotive News, told CBS Evening News anchor Bob Schieffer that GM wasn't to go bankrupt. "I don't think General Motors is about to go broke by a long shot. But make no mistake, this a watershed day for GM and for the auto industry.

"The United Auto Workers, who are used to getting probably the best benefit packages, the best salaries in the nation — today their leaders agreed to roll back those benefits, roll back those pay scales to a much more reasonable level, and that's unheard of."

Several analysts questioned how much GM and Delphi will save. Most workers that retire will get full benefits, which doesn't relieve GM's sizable pension obligations, Goldman Sachs analyst Robert Barry said in a note to investors. Barry added that any savings gained from the retirement of younger workers will be offset by GM's assumption of Delphi retiree benefits.

Analysts said it's also unclear what will happen to the bulk of Delphi's 34,000 hourly workers. Delphi remains in negotiations with GM and its unions to lower its labor costs, which it puts at $75 an hour in wages and benefits. Delphi has threatened to ask a bankruptcy judge to cancel its union contracts if it fails to reach an agreement by March 30. If the judge does cancel those contracts, the unions could call a strike that would cripple Delphi and GM.

"With a looming strike, they had to do something, but how they're going to address plant closures for Delphi and remaining workers' salaries are the two loose ends here," said Rebecca Lindland, an auto analyst with the consulting firm Global Insight.

Lindland added she's pessimistic about the number of people who will opt for the buyouts, especially younger workers who have no other health insurance. Some older workers also might not be persuaded, she said.

The Delphi plan must be approved by the U.S. Bankruptcy Court. Delphi said it will ask a judge to consider the plan April 7. GM's plan doesn't require approval, and Flores said retirements could begin as early as June 1. Workers will have up to 52 days to decide whether to take the buyouts once they learn details in plant meetings.

Detroit-based GM said the plan will move it toward its goal of cutting 30,000 hourly jobs by 2008. GM has slightly more than 113,000 hourly workers companywide, but only UAW-represented workers are eligible for now, Flores said. The automaker is negotiating with the IUE-CWA on a similar deal. Salaried workers won't be getting the buyout option, Flores added.

"We said we'd be working with UAW leadership to develop an accelerated attrition program that would help us achieve needed cost reductions as rapidly as possible, while at the same time responding to the needs of our employees," GM Chairman and CEO Rick Wagoner said in a statement. "We are pleased that this agreement will help fulfill that important objective."

In a memo sent to local union leaders, UAW President Ron Gettelfinger and Vice President Richard Shoemaker said they will ask the bankruptcy court to approve the Delphi plan.

"Working out this agreement required an inordinate amount of time and patience due to the complexities posed by Delphi's bankruptcy filing," Gettelfinger and Shoemaker said in a statement.