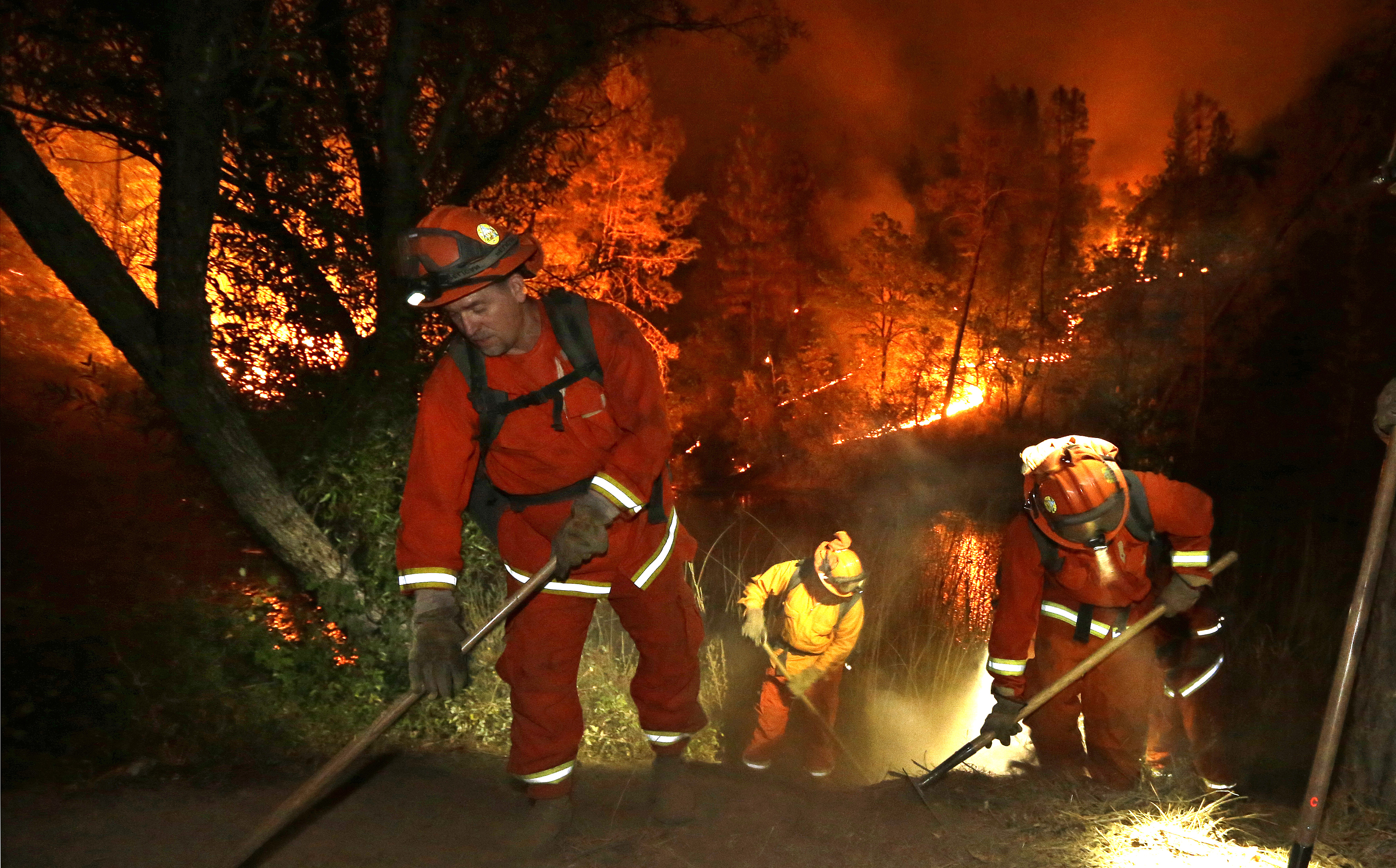 CALIFORNIA -- Fast and furious. A surging wildfire in Northern California figures to become of the five most destructive the state has ever seen.

CBS News Danielle Nottingham reports that there was nothing they could do but run for their lives when the fire raced through the town of Middletown. Residents captured images as they were forced to drive through the flames.

"And as we came down, fire's everywhere. Our neighbor's houses... everybody's houses are burning up. It's awful," said Joyce Rein through sobs, recalling trying to escape.

Joyce Rein and Everett Francis were among the thousands trying to escape.

"It went all the way around us. There was no stopping it," Francis recalled. "We just watched the houses around us burn. It was utter chaos. It was crazy."

The Valley Fire, burning in a town 95 miles north of San Francisco, is destroying up to 2,000 acres an hour.

Hamid Heidary's apartment was one of 50 leveled in his complex. Everyone was okay.

"Thank God," he said. "That's the only piece of good news we have that everybody's okay."

But the situation remains dangerous.

High-winds continue to scatter embers and spread flames. A disabled elderly woman died when firefighters were unable to reach her.

Richard Reiff is one of four firefighters burned after being dropped into the fire zone by helicopter. Recovering int he hospital Monday, he got a surprise call from California's Gov. Brown.

Don Lopez spent the weekend trying to save his town of Middletown. He's been a firefighter in the town for three-decades. Remarkably, the fire jumped past his home.

"And as I came around the corner I just saw it. I just didn't know what to do. I just started crying," he said through tears. "But I'm looking around at all my neighbors and they are just devastated."

He's back on the front lines on Monday.

There are still fields of hot ashes in Middletown. Without communications and proper sanitation, authorities aren't taking any chances. It will be days before residents are expected to return to their homes.

Major wildfires are burning in six western states. It has been the worst fire season in 10 years, with more than 3.5 million acres burned. One reason: the drought. Researchers say California has not been this dry, in 500 years.

CBS News' David Begnaud reports in California, more than 11,000 firefighters are chopping, digging and dumping water trying to stay ahead of 12 major fires.

"There was no stopping it," one fireman said. "Couldn't get in the way of it. You had to get out of the way."

Hot winds and drought fueled brush sparked the Butte Fire burning east of Sacramento. 10,000 people have been evacuated and 135 homes destroyed. The Sierra Nevada National Forest has been burning for over a month.

California Fire Captain David Shew says a huge concern is how rapidly the fires are moving.

"If the moisture content is already gone it means the fuel is going to ignite much faster much easier and continue to spread at a much faster rate.," he said.

The Chelan Fire in Washington State last month burned 88,000 acres and 13 large fires continue to burn there, including the Okanogan, the largest wildfire in the state's history.

Back in California, scientists on Monday discovered a new concern. The Sierra Nevada snow pack is the lowest it has been in 500 years, which means little water will run off to help with drought conditions.

With no end to the hot dry temperatures in sight, California Gov. Jerry Brown has declared a state of emergency.

"Increasingly over the next few years and decades you'll see the same thing only more exaggerated and more intense," he said.

It is almost impossible to exaggerate the devastation in Middletown.

California has seen 1,600 more fires this year than normal years.