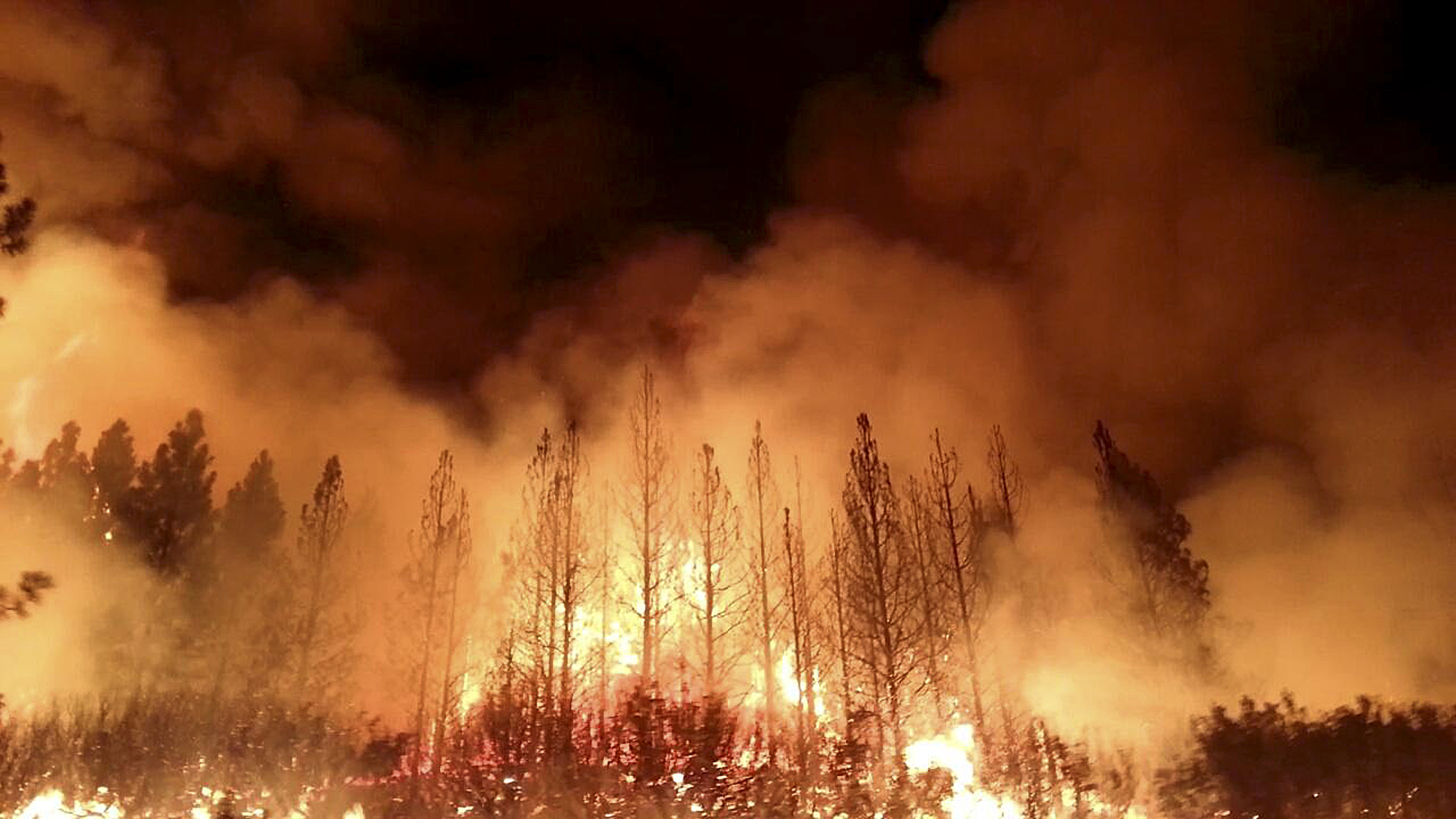 FRESNO, Calif. A wildfire outside Yosemite National Park more than tripled in size Thursday, prompting officers to warn residents in a gated community to evacuate their homes and leading scores of tourists to leave the area during peak season.

California Gov. Jerry Brown declared a state of emergency due to the huge fire, one of several blazes burning in or near the nation's national parks and one of 50 major uncontained fires burning across the western U.S.

As flames approached an area of Pine Mountain Lake with 268 homes in the afternoon, deputies went door-to-door to deliver the news and to urge people to leave, Tuolumne County Sheriff's Department Sgt. Scott Johnson said.

The evacuations are not mandatory, although Johnson stressed that the fire, smoke and the potential for power outages pose imminent threats.

"We aren't going to drag you out of our house, but when we are standing in front of you telling you it's an advisory, it's time to go," he said.

Fire officials said the blaze, which started Saturday, had grown to more than 84 square miles and was only 2 percent contained Thursday, down from 5 percent a day earlier. Two homes and seven outbuildings have been destroyed.

"We got a monster on our hands," Lee Bentley of the U.S. Forest Service told CBS News. "This fire is making its own weather. It's going every which direction. This is one of the worse I've ever been on. I've been doing [it] for quite a few years."

As CBS News' Teresa Garcia reported, the fire threatens hotels, campgrounds and more than 2,500 structures. Steep hills and rugged terrain have been major obstacles for the more than 1,300 firefighters on the line.

While the park remains open, the blaze has caused the closure of a 4-mile stretch of State Route 120, one of three entrances into Yosemite on the west side, devastating areas that live off of park-fueled tourism.

Officials also have advised voluntary evacuations of more than a thousand other homes, several organized camps and at least two campgrounds. More homes, businesses and hotels are threatened in nearby Groveland, a community of 600 about 5 miles from the fire and 25 miles from the entrance of Yosemite.

"Usually during summer, it's swamped with tourists, you can't find parking downtown," said Christina Wilkinson, who runs Groveland's social media pages and lives in Pine Mountain Lake. "Now, the streets are empty. All we see is firefighters, emergency personnel and fire trucks."

Though Wilkinson said she and her husband are staying put -- for now -- many area businesses have closed and people who had vacation rental homes are cancelling plans, local business owners said.

"This fire, it's killing our financial picture," said Corinna Loh, whose family owns the still-open Iron Door Saloon and Grill in Groveland. "This is our high season and it has gone to nothing, we're really hurting."

Loh said most of her employees have left town. And the family's Spinning Wheel Ranch, where they rent cabins to tourists, has also been evacuated because it's directly in the line of fire. Two outbuildings have burned at the ranch, Loh said, and she still has no word whether the house and cabins survived.

The governor's emergency declaration finding "conditions of extreme peril to the safety of persons and property" frees up funds and firefighting resources and helps Tuolumne County in seeking federal disaster relief.

Park officials said the fire has not impacted the park itself, which can still be accessed via state Routes 140 and 41 from the west, as well as State Route 120 from the east side.

Yosemite Valley is clear of smoke, all accommodations and attractions are open, and campgrounds are full, said park spokesman Scott Gediman. During summer weekdays, the park gets up to 15,000 visitors.

"The fire is totally outside the park," Gediman said. "The park's very busy, people are here. There's no reason that they should not come."

The Yosemite County Tourism Bureau based in Mariposa has been helping tourists displaced by the fire to find new accommodations in other park-area towns, said director Terry Selk.

In Yellowstone National Park, five wildfires have been burned about 18 square miles of mostly remote areas on the 25th anniversary of the infamous 1988 fires that burned more than 1,200 square miles inside Yellowstone, or more than a third of the park.

The vast areas that burned that year remain obvious to anybody who drives through. The trees in the burn areas are a lot shorter.

This summer's fires haven't been anywhere near that disruptive. The biggest fire in Yellowstone, one that has burned about 12 square miles in the Hayden Valley area, for a time Tuesday closed the road that follows the Yellowstone River between Fishing Bridge and Canyon Village.

Anybody who needed to travel between Fishing Bridge and Canyon Village faced a detour through the Old Faithful area that added 64 miles to the 16-mile drive.

By Wednesday, the road had reopened. Later that day, half an inch of rain fell on the fire.

Park officials had been making preliminary plans to evacuate Lake Village, an area five miles south of the fire with a hotel, lodge, gas station and hospital. Any threat to that area appeared less likely now.

A few trails and parking areas along the Yellowstone River remained closed in case the fire flares up again and the area needs to be evacuated, park officials said.

Smoke from the fires has been blowing into Cody, a city of about 10,000 people 50 miles east of Yellowstone, for the past couple weeks.

If anything, though, visitors have been more curious about this year's fires than threatened, said Scott Balyo, executive director of the Cody Country Chamber of Commerce.

"People from the East Coast or the Midwest where this isn't common are very interested, certainly, in the way the fires look, the way the smell," he said. "There's a lot of educational opportunities along with it."

This year's Yellowstone fires are being allowed to burn to help renew and improve the ecosystem.

A lightning-sparked fire in a remote area of Colorado's Rocky Mountain National Park burned more than 615 acres in June but had no impact on tourists -- other than backcountry trail closures -- or tourism-dependent towns adjacent to the park.

Crews allowed the Big Meadows Fire to burn beetle-killed spruce before containing the blaze. The fire was overshadowed by wildfires that destroyed nearly 500 homes near Colorado Springs and a 170-square-mile complex of fires on national forest land in Colorado's southwestern mountains.

There have been more than 32,000 fires this year that have burned more than 5,300 square miles. The U.S. Forest Service, Garcia reported, said its $1 billion firefighting budget is nearly tapped out and is diverting money from other areas to make up the difference.