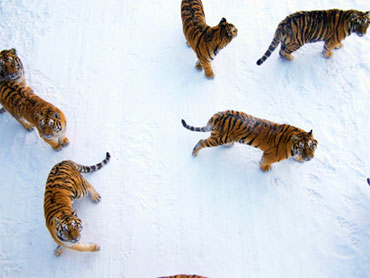 Wild tigers could become extinct in 12 years if countries where they still roam fail to take quick action to protect their habitats and step up the fight against poaching, global wildlife experts told a "tiger summit" Sunday.

The World Wildlife Fund and other experts say only about 3,200 tigers remain in the wild, a dramatic plunge from an estimated 100,000 a century ago.

James Leape, director general of the World Wildlife Fund, told the meeting in St. Petersburg that if the proper protective measures aren't taken, tigers may disappear by 2022, the next Chinese calendar year of the tiger.

Their habitat is being destroyed by forest cutting and construction, and they are a valuable trophy for poachers who want their skins and body parts prized in Chinese traditional medicine.

The summit approved a wide-ranging program with the goal of doubling the world's tiger population in the wild by 2022 backed by governments of the 13 countries that still have tiger populations: Bangladesh, Bhutan, Cambodia, China, India, Indonesia, Laos, Malaysia, Myanmar, Nepal, Thailand, Vietnam and Russia.

The Global Tiger Recovery Program estimates the countries will need about $350 million in outside funding in the first five years of the 12-year plan. The summit will be seeking donor commitments to help governments finance conservation measures.

"For most people tigers are one of the wonders of the world," Leape told The Associated Press. "In the end, the tigers are the inspiration and the flagship for much broader efforts to conserve forests and grasslands."

The program aims to protect tiger habitats, eradicate poaching, smuggling, and illegal trade of tigers and their parts, and also create incentives for local communities to engage them in helping protect the big cats.

The summit, which runs through Wednesday, is hosted by Russian Prime Minister Vladimir Putin, who has used encounters with tigers and other wild animals to bolster his image. It's driven by the Global Tiger Initiative which was launched two years ago by World Bank President Robert Zoellick.

Leape said that along with a stronger action against poaching, it's necessary to set up specialized reserves for tigers and restore and conserve forests outside them to let tigers expand.

"And you have to find a way to make it work for the local communities so that they would be partners in tigers conservation and benefit from them," Leape said.

"To save tigers you need to save the forests, grasslands and lots of other species," he added. "But at the same time you are also conserving the foundations of the societies who live there. Their economy depends very much on the food, water and materials they get from those forests."

About 30 percent of the program's cost would go toward suppressing the poaching of tigers and of the animals they prey on.

Russia's Natural Resources Minister Yuri Trutnev said that Russia and China will create a protected area for tigers alongside their border and pool resources to combat poaching.

Leape said that for some of the nations involved outside financing would be essential to fulfill the goals.

"We need to see signficant commitment by the multilateral and bilateral indsitutions like the Global Environment Facility and the World Bank plus individual governments like the U.S. and Germany," Leape told the AP.

For advocates, saving tigers has implications far beyond the emotional appeal of preserving a graceful and majestic animal.

"Wild tigers are not only a symbol of all that is splendid, mystical and powerful about nature," the Global Tiger Initiative said in a statement. "The loss of tigers and degradation of their ecosystems would inevitably result in a historic, cultural, spiritual, and environmental catastrophe for the tiger range countries."

Three of the nine tiger subspecies - the Bali, Javan, and Caspian - already have become extinct in the past 70 years.

Much has been done recently to try to save tigers, but conservation groups say their numbers and habitats have continued to fall, by 40 percent in the past decade alone.

In part, that decline is because conservation efforts have been increasingly diverse and often aimed at improving habitats outside protected areas where tigers can breed, according to a study published in September in the Popular Library of Science Biology journal.

Putin has done much to draw attention to tigers' plight. During a visit to a wildlife preserve in 2008, he shot a female tiger with a tranquilizer gun and helped place a transmitter around her neck as part of a program to track the rare cats.

Later in the year, Putin was given a 2-month-old female Siberian tiger for his birthday. State television showed him at his home gently petting the cub, which was curled up in a wicker basket with a tiger-print cushion. The tiger now lives in a zoo in southern Russia.