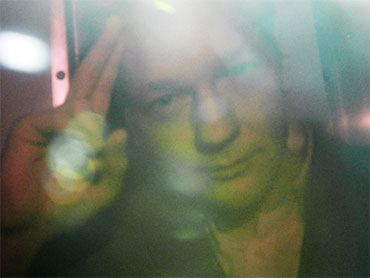 An appeal by British prosecutors to deny WikiLeaks founder Julian Assange the strict conditional bail he was granted earlier in the week was rejected by a British court Thursday, paving the way for Assange's release pending an extradition request by Sweden.

Cheers erupted outside the London court as the verdict by High Court justice Duncan Ouseley was reported. The judge then outlined the bail conditions to Assange in a packed courtroom full of lawyers, journalists and supporters.

Prosecutors had argued there was a risk the 39-year-old Australian, who faces sex-crimes allegations in Sweden, would abscond if he was freed. But Ouseley said if Assange fled "he would diminish himself in the eyes of many of his supporters."

"I don't accept that Mr. Assange has an incentive not to attend (court)," Ouseley said. "He clearly does have some desire to clear his name."

Assange, dressed in a dark gray suit, smiled and gave a thumb's up sign to a packed courtroom as he was led from the dock by court guards. It was not immediately clear how long it would take before he was released.

Assange has been in prison since Dec. 7, following his surrender to British police over a Swedish sex-crimes warrant. He denies any wrongdoing.

Assange was granted a conditional release on 200,000 pounds ($316,000) bail Tuesday, but prosecutors sought to keep him behind bars, arguing there was a risk he would flee.

Ouseley made some amendments to the bail conditions. Assange must wear an electronic tag, report to police every day and observe a curfew. He also must stay at a registered address - a 10-bedroom mansion in eastern England owned by Vaughan Smith, a WikiLeaks supporter and founder of London's Frontline Club for journalists.

Lawyers acting for Sweden say Assange is accused of rape, molestation and unlawful coercion by two women for separate incidents in August in Sweden. He has not been charged.

Lawyers for Assange have called the case against him a "stitch up" and promise they will contest Sweden's attempt to extradite him for questioning.

Ouseley himself cast doubt on the Swedish proesecutor's case against Assange, reports the Guardian, when he said: "The history of the way it [the case] has been dealt with by the Swedish prosecutors would give Mr Assange some basis that he might be acquitted following a trial."

Assange's lawyers say the allegations stem from a dispute over "consensual but unprotected sex" and argue that he has offered to make himself available for questioning via video link or in person in Britain.

Assange's supporters suspect the claims against him are politically motivated - a charge Sweden has denied.

Assange remained in custody as his lawyers scrambled to assemble the 200,000 pounds bail. Lawyer Mark Stephens said earlier he was confident the amount, pledged by several supporters, could be raised.

Assange's next court appearance will be Jan. 11, 2011, a pre-trial hearing regarding his possible extradition.

Assange's lawyer, Geoffrey Robertson, said Vaughan Smith, a wealthy British journalist and owner of Frontline club, will be among Assange's many sureties, according to the Guardian. Robertson joked in court that releasing Assange to Smith's care was like placing Assange under "Mansion Arrest."