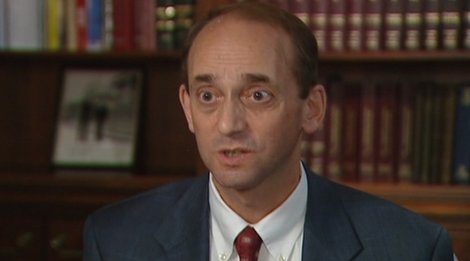 JEFFERSON CITY, Mo. -- Missouri's auditor, who fatally shot himself in an apparent suicide, had vowed to take down the state's most powerful politicians and donors, including his fellow Republicans, when he launched an anti-corruption campaign for governor last month.

But in his final days, Tom Schweich described having knots in his stomach over what he thought was an anti-Semitic whisper campaign by a GOP consultant who now runs the state party.

His intensity had served him well in the past -- he was proud of exposing corruption in his four years as auditor. But his tendency to fixate on issues also sometimes made it hard for him to get over political attacks, say some of his advisers and colleagues.

Schweich left behind a wife and two children -- and a seemingly rising political career -- when he died Thursday at age 54.

He said his audits exposed more than 30 "corrupt government officials" who allegedly stole taxpayer money. But his promised gubernatorial campaign against corruption had barely begun.

Announcing his candidacy last month, Schweich had vowed to bring a never-before-seen "level of intensity, tenacity, transparency, and rigor" in a quest to root out "rampant corruption in Jefferson City."

As evidence of his grit, Schweich touted his work in the U.S. State Department coordinating an anti-drug initiative in Afghanistan.

"Negotiating with Afghan warlords prepared me well for Missouri politics," he said.

Schweich said the $900,000 Hanaway accepted from her "billionaire patron" made her "bought and paid for" by Sinquefield, who employs an "army of mercenaries" to exert his influence over elected officials.

"Nothing is too dishonest for them, and apparently nothing is too petty for them, either," Schweich said last month. "It's corrupt, and there's a lot more corruption going on in that camp that we'll be talking about in the days to come."

"Undoubtedly, rooting out corruption is a very good thing," Hanaway told reporters and editors at the Capitol in mid-February. "But I have a question: Isn't that his job now?"

In the ensuing days, Schweich became increasingly focused on another man: John Hancock, a consultant who did opposition research for Hanaway last year and was elected Feb. 21 as chairman of the Missouri Republican Party.

Schweich, an Episcopalian, told The Associated Press he believed Hancock had been telling Republican donors and activists that Schweich was Jewish, which he perceived as an anti-Semitic statement.

Schweich told the AP that he has some Jewish ancestry, but said he had become increasingly firm in his Christian faith.

Hancock told the AP after Schweich's death that it's possible he may have told some people Schweich was Jewish, "but I wouldn't have said it in a derogatory or demeaning fashion," he said.

Schweich confronted Hancock in November about the alleged comments, but their tension was not resolved. As the date approached for the party chairman's election, Schweich reached out to other Republicans -- including U.S. Sen. Roy Blunt and some state party committee members -- to try to rally people against electing Hancock.

Some Republicans declined to get involved in what they viewed as personal spat.

Eventually, Hancock's alleged comments "became some kind of a hurdle" to Schweich, said state Republican Party Secretary Pat Thomas, who was among those to whom Schweich had appealed.

On Monday, Schweich outlined the whole ordeal to an AP reporter, saying he planned to hold a press conference about it the next day -- even though his advisers said it was a poor political move. Schweich described having knots in his stomach for the past week, because he was so worked up over it. He didn't follow through on the press conference, telling the AP he was still trying to get a prominent Jewish person to stand with him first.

Then, on Thursday morning, Schweich talked twice over the phone with the AP to invite a reporter to his suburban St. Louis home for an afternoon interview, saying he was ready to go public with his accusations. He said he was also inviting a reporter from the St. Louis Post-Dispatch.

Police say authorities received an emergency call about the shooting just minutes after those phone calls.

Hancock emailed state Republican Party officials Friday saying he was "sad to have learned that some of (Schweich's) final moments were spent thinking of an ongoing disagreement with me."

"We may never know what drove Tom to take his own life -- but it seems clear that there were deeper and more profound issues than a minor political squabble," Hancock said.

A memorial service is scheduled for Tuesday at the Episcopal church Schweich attended.

On Friday, Gov. Jay Nixon appointed one of his own longtime aides, John Watson, to serve as auditor until Nixon chooses a permanent replacement.