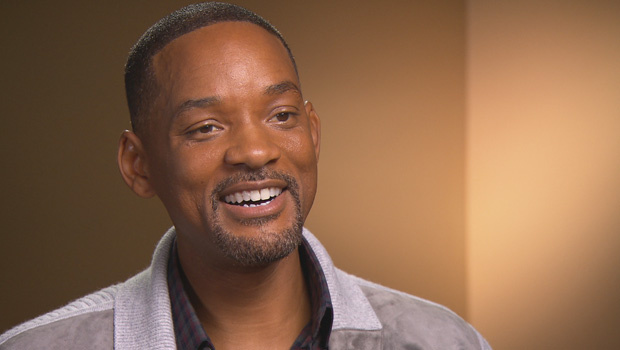 We posed questions this morning to Will Smith, whose latest movie is about the risk of concussion from playing football. He'll be directing his answers to our Tracy Smith:

What bothered Will Smith most about taking on the role in his new film, "Concussion"?

"I'm a football dad. And my son, Trey, played for four years at Oaks Christian, which is a football powerhouse. And it was just one of the most beautiful times in my life, as a parent -- the bonding, the excitement for the family, the Friday night lights, all that. I loved it.

"So, you know, when I received this screenplay, I was really conflicted. I really don't want to be that guy, the guy who reveals that playing football could potentially cause brain damage."

In "Concussion," Smith is Dr. Bennet Omalu, the Nigerian-born pathologist who found out what kind of damage those repeated hits can do to a football player's brain, and -- in the film anyway -- made some people in the NFL very angry indeed.

Dr. Cyril Wecht (Albert Books): "They're terrified of you. The NFL owns a day of the week -- the same day that church used to own. Now it's theirs!"

Was Smith worried about taking on the National Football League?

"I'm not expecting to be invited to the Super Bowl next year!" he said. "Denzel will probably get my tickets this year. But after meeting Dr. Omalu and after getting up to speed on the science, I felt solid that I'd be willing to take whatever I had to take to deliver the information."

Truth is, he's been up for a challenge all of his life.

Will Smith was already a successful recording artist when he was tapped to star in a TV series, "The Fresh Prince of Bel Air." He had zero acting experience, but it wasn't much of a stretch to see him play a wisecracking teenager.

But "Six Degrees of Separation" WAS a stretch. Smith played a social-climbing street hustler, and he got so into the role he had a tough time getting out of it.

"Nooooo, that's terrible acting," he replied. "That's not acting at all!"

His goal back then: to be the biggest movie star in the world.

Did the star of "Men in Black" think it was a little audacious to say that? "Yes. But I think it's as audacious as saying, 'Hey, what if we take this metal and wrap it and put some stuff out on the sides and fly it over the ocean?'"

"Yeah, I feel like, I made up what I call 'a new old saying': being realistic is the most commonly-traveled road to mediocrity."

There must be something to that: Smith has two Academy Award nominations for Best Actor (for "Ali" and "The Pursuit of Happyness").

And for most of the past 20 years, few other actors have packed a bigger box office punch. 1996's "Independence Day" alone grossed more than a quarter-billion dollars. In fact, Will Smith is the only actor ever to star in eight consecutive number-one films.

Did that track record make him feel infallible?

"Yes," he said. "Definitely felt that I couldn't miss. And that perspective got corrected a little bit! It got corrected. Like, 'Ooh, shoot, I can miss when I shoot!'"

And 2013's "After Earth," which also starred his son, Jaden, was one of those misses.

"I was in a funk for those three days," he said. "And then that Monday morning I got a call that my father had been diagnosed with cancer. And it was, like, 'Got it. I understand.' Perspective. Crystal clear."

And maybe that explains why the 47-year old Smith wanted to do "Concussion." In the movie, Smith's character is vilified after he went public with his research.

The real Dr. Bennet Omalu says it's all true.

"I was bruised, battered, marginalized, ridiculed, dismissed, pretty much asked to shut up," said Dr. Omalu. "They wanted to exterminate me professionally by requesting that my paper be retracted."

"They wanted to exterminate you professionally, just wipe out your career basically?" asked Tracy Smith.

"Yes. If your scientific paper is retracted, you're finished."

Dr. Omalu says the film is true to every detail, down to the way he talks.

Smith says he listened to Omalu's voice: "It's a lot more round."

"What people want to take away is that we are one family," said Dr. Omalu. "We are one love. We are one hope. We all need to be joyful people, 'cause life can be wonderful if we choose to make it wonderful."

"I don't think I'm gonna try to top that!" Will Smith laughed.

But he may try to top himself: for Will Smith, being a huge movie star just might not be enough.

"Any idea how that's gonna come out?"

"If people keep saying all the crazy kind of stuff they've been saying on the news lately about walls and Muslims, they're going to force me into the political arena."

"What are you gonna run for?"

"I mean, I gotta be the president, you know?" said Smith. "Come on! Keep it real. How you gonna ask me that? You know, what else would I run for?"

Audacious? Sure. But leave it to Will Smith to think big.

To watch a trailer for "Concussion," click on the video player below.