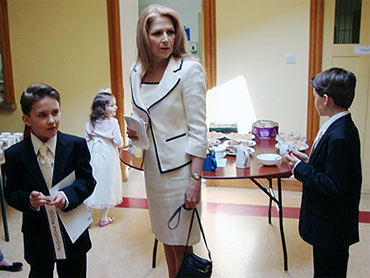 Police in Edinburgh, Scotland, have arrested an American woman and accused her of killing her three children.

Riggi survived and lies with broken bones in a Scottish hospital. Police say she's under sedation, and they will question her at length when doctors deem that she's up to it.

The Riggis, originally from Colorado and California, had moved to work in Scotland's offshore oil industry 13 years ago, Palmer says. But, their marriage had recently broken down, with a bitter divorce and custody fight looming.

Last month, police say, Theresa Riggi disappeared with her kids from the family home in Aberdeen. She was traced to the apartment in Edinburg, 130 miles away but. by the time Scottish social service workers were warned by her husband that the children might need some protection, it was too late.

"We don't have all the facts yet. The case is still unfolding," points out Dr. Sara West, a forensic psychiatrist at Case Western Reserve University in Cleveland and a specialist in the phenomenon of parents who murder their children.

"What we do know is that parents sometimes who are stressed out by extreme life events, such as divorce, can take measures to get back at one another, such as killing the children. That would be a very extreme form."

On "The Early Show on Saturday Morning," Riggi described five reasons for co-anchor Ben Tracy that parents might take the lives of their own offspring.

Altruism "refers to a parent who kills a child to relieve the suffering of the child," she told Tracy. "This may be because the parent becomes depressed and doesn't want to leave their child behind in such a terrible world, or because they either perceive the child to have a syndrome that would cause them to suffer, or they may have a real syndrome that causes them to suffer."

Acute psychosis "would be a parent who is mentally ill and (when) there's really no alternative, rational explanation for the death of the child."

An unwanted child "is self-explanatory. That's a parent who feels the child is a hindrance and gets in the way of the parent's goals."

Child maltreatment involves "accidental or fatal child abuse. And that refers to a parent who in the course of physically abusing the child just goes too far."

Spousal revenge "is the most rare form of filicide, the murder of a child by a parent. It's also referred to as the Medea Syndrome, after the Greek myth in which Medea kills her sons to get back at her is husband, Jason, for having an affair."

In a famous case in 2001, Andrea Yates drowned her five young children in the bathtub, Tracy noted.

"After a second hearing," West said, "Andrea Yates was actually found not guilty by reason of insanity, where she was convicted of murder in her first hearing. Andrea Yates believed, psychotically, that her children were going to come to some harm once they reached the age of maturity. So she was attempting to save them from that."

Another famous case, Tracy said, is that of Susan Smith who, in 1994, drowned her two children in a lake.

"After she did attempt to plead not guilty by reason of insanity," West said, "Susan Smith was actually convicted and sentenced to life in prison. It appears the motive behind that particular murder was that her significant other did not want children and she wanted to be with him."

Overall, West observed, the cases of Yates, Smith and, allegedly, Riggi, shows there's "no one particular incident that would have triggered people to be aware that this event was about to occur.

"But, of course, we always want to focus on prevention. The things that I could suggest would be that family and friends be mindful of relatives who are mothers and fathers of young children figuring out how they cope with stress and getting them help."