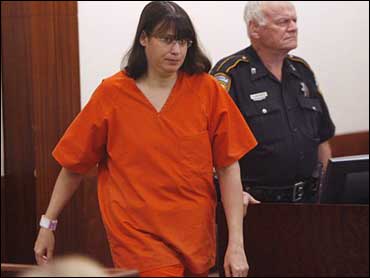 Rusty Yates told The Associated Press that Andrea Yates never told him, "I finally did it" in her telephone call to him after the drownings, as a Houston police officer testified during her second trial.

"It's been printed in papers as fact, and it's absolutely not true," he said. "Much of the state's case was built on lies."

A jury on Wednesday found Andrea Yates not guilty by reason of insanity in the June 2001 bathtub drownings of her children. She was retried after her 2002 murder conviction was overturned because of erroneous testimony about a nonexistent "Law & Order" television episode.

On Thursday, the 42-year-old was committed to the maximum-security North Texas State Hospital in Vernon.

Hospital officials will review her mental state and decide whether she is a danger to society. State District Judge Belinda Hill will review that report and hold a hearing within 30 days to determine if Yates should remain there or be moved to another state hospital.

During the interview, Rusty Yates said that on the day his children died, Andrea had called him and asked him to come home. When he and his mother arrived and learned from police what had happened, he reminded his mother that Andrea had filled the bathtub for no apparent reason about a month or so earlier.

"I said, `I guess she'd been thinking about this for some time and finally did it," Yates said. He said an officer must have overhead the conversation and took it out of context.

"In the first trial, they said Andrea did this to try to get out, whatever that means, which sounded like she wasn't happy at home ... and this time they said she wanted to run off with me into the sunset," he said. "Well, which is it?

"The fact is, they spent five years and still don't have a reason why she did it because they are unwilling to look at the fact she was psychotic. That's the only reasonable explanation for her behavior."

Yates, an engineer at NASA's Johnson Space Center, said he plans to visit his ex-wife regularly, but his role in her life will diminish as he moves on with his own. He remarried in March and now has two stepsons.

"I don't forget my children, and I don't forget Andrea — but I don't dwell on it either. I try to remember my children fondly," he said. "I'm building a new life ... and have a new family and am more focused on them."

For his ex-wife to ever be released from state care will require a complicated evaluation process. Experts say it can take decades before psychiatrists decide a patient is healthy enough to leave, and even then a judge can reject those findings.

Yates said he was nervous on Wednesday as he waited for the verdict. The family, which has always supported Andrea, was devastated when she was convicted at the first trial 2002, he said.

Yates had testified for the defense in that first trial, and he said Thursday he didn't know why he wasn't asked to testify again.

"In some respects," he said, "I know Andrea better than anybody."

The defense attorneys never disputed that Andrea drowned the children, but they said she suffered from severe postpartum psychosis and, in a delusional state, believed Satan was inside her. She believed she was trying to save the children from hell by drowning 6-month-old Mary, 2-year-old Luke, 3-year-old Paul, 5-year-old John and 7-year-old Noah, they told the jury.

"It's this simple: This lady never did anything, anything wrong in her whole life," defense attorney Wendell Odom said. "She's mentally ill. She wakes up one morning. She drowns her five kids. Come on —— we all know she's insane, and it's a shame that it took us this long to finally get the right verdict."

Prosecutors had maintained that although Andrea Yates was mentally ill, she didn't meet the state's definition of insanity: being so severely mentally ill that she did not know her actions were wrong.

The foreman of the jury said Thursday that the group had "some emotional difficulty" reaching its unanimous verdict and would have had an easier time if they could have found her "guilty but insane."

Shortly before they delivered their verdict, the jurors asked to see a picture of the five young children, then sat in silence for 10 minutes —— 2 minutes for each child —— remembering the victims, foreman Todd Frank, a 33-year-old marketing manager with his own young son, told "Good Morning America" on Thursday.

"We understand that she knew it was legally wrong," he said. "But in her delusional mind, in her severely mentally ill mind, we believe that she thought what she did was right."