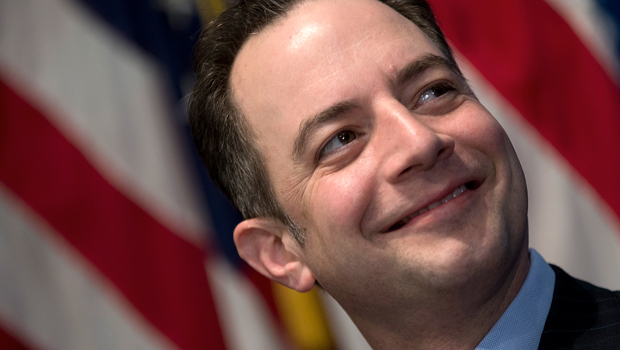 When you are the chairman of a political party, it doesn't pay to be subtle. So when GOP Chairman Reince Priebus met with reporters Tuesday for breakfast, he got right to the point. The Democrats are facing an electoral "tsunami" in November, he said. Obamacare "is in the tank and is total poison across the country ... it is sinking these candidates into the abyss." The Democrats, he says, "are in the dumps." The Senate is going to be in Republican hands by the end of the year.

Mostly true! The final meteorological determination after the November elections may be something short of a tsunami, but historical patterns, current polling, and the electoral landscape suggest it is not going to be a pleasant year for Democrats. Even Mitt Romney is taking a belated victory lap.

Priebus was at the breakfast, sponsored by the Christian Science Monitor, to commemorate the first anniversary of his effort to modernize the Republican Party. He was there to boast about new GOP campaign tactics and the party's full-time voter outreach program. The event was a measure of how much the party's fortunes have changed in 12 months. It also marked something else--how the roar for sweeping immigration reform has been reduced to a whisper.

A year ago Republicans were in a panic after the 2012 presidential election loss. Priebus, as party chairman, was pushing reform. He commissioned a report, nicknamed the "autopsy," which gave you some indication of where Republicans stood. You can only do an autopsy when the body is dead. "The November election was a wake-up call," he said at the time.

The report offered many suggestions, a lot of them technical ones about how to change the primary process, trim the number of debates, improve outreach to voters, and boost fundraising. The headline flash was that its authors believed the Republican Party needed to make comprehensive immigration reform a priority. "We must embrace and champion comprehensive immigration reform," the report said. "If we do not, our Party's appeal will continue to shrink to its core constituencies only." The report made no other specific policy prescription in that way.

No one is embracing comprehensive immigration reform in any significant way as a part of the 2014 campaign.

At the time, this presented Priebus with a problem. His job is to raise money and create a structure that any candidate can use to beat Democrats. He's not primarily a policy guy. But he can't build an operation to win if party policy positions limit the terrain on which the sterling operation he builds can compete.

For many conservatives "comprehensive immigration reform" mentioned in the context of improving the party's image with Hispanic voters meant "amnesty"--specifically, legislation that would offer citizenship to existing undocumented workers. (It suggested this to conservatives because that's what its proponents meant.) A year ago Priebus finessed that portion of the report, saying it was simply a recommendation. He also insisted, however, that the party needed to focus on comprehensive immigration reform.

In the interim, the Republican Party has not focused on immigration reform, and for good reason. Why have a big internal fight when things are going so well? No one is embracing or championing comprehensive immigration reform in any significant way as a part of the 2014 campaign. Even the definition of what constitutes "making an effort" on immigration has gotten rather vague. In some cases it can mean as little as having a policy position, no matter what it is.

On Tuesday morning, I read the line about immigration reform from the GOP report to Priebus and asked him whether the dire consequences the report predicted would befall the party if it didn't take on comprehensive reform. The chairman then switched from making bold declarations to more semantic language. "I would ... caution you not to impose your definition of what comprehensive immigration reform is. There's a general agreement that we need to have serious immigration reform, but I don't believe there's general agreement as to what that reform is." "General agreement" is obviously not the same as the report's call for "embracing" and "championing."

The question is whether the political push for "comprehensive reform"--however you define it--is just sleeping until the 2014 elections are over or has been replaced with a new view. Some proponents of citizenship or legal status for illegal aliens in GOP ranks suggest they'll have another shot after the midterms. Others suggest that any immigration reform in 2015 will be modest, consisting of border security provisions and improvements to the existing visa system, because candidates jockeying for position in the 2016 primary will inflame the debate, causing the kind of public spat everyone is avoiding this year.

It's hard to argue with that view. A year ago, there were plenty of conservatives who disagreed with the idea that comprehensive immigration reform would be the political win with Hispanic voters that the authors of the autopsy report thought. (Not to mention the group that thought it was wrong to reward law-breakers). As the party's fortunes have improved, the panic that caused quick evolutions like Sean Hannity's has subsided.

There is also considerable strength behind an alternative political view that Priebus himself seems to support. As long as Republicans do not say things that Hispanic voters find outright objectionable while improving their outreach efforts, they'll have a chance with Hispanic voters. So, no more talk of "self-deportation." Hide Rep. Steve King and his characterization of Mexicans as drug lords and put some more miles on the campaign van. Priebus told the story, as he has for the past year, of Rep. Steve Pearce of New Mexico. The five-term congressman does not support citizenship for illegal aliens but keeps winning in a district that was 52 percent Hispanic in 2012 because he puts 90,000 miles on his car campaigning all across the region, including in Hispanic communities, says Priebus.

Given the conservative nature of the district and the sharp drop-off in Hispanic voting in midterm years, Pearce is likely to win again in 2014, though Democrats once fantasized about taking his seat from him. Elections held in nonpresidential years are quite different than those during presidential contests--that was one of the points of the 2012 autopsy--but if a loss in 2012 did not create pressure for comprehensive action, a big win in 2014 is not likely to either. Right now it looks like the GOP autopsy's support of immigration reform is the only thing that is truly dead.