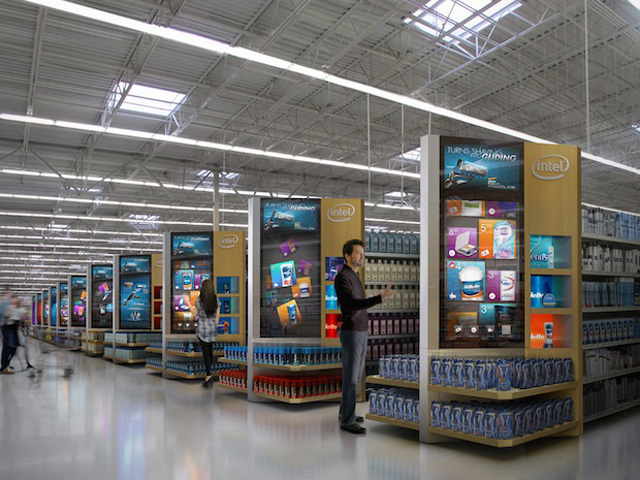 The towering evergreen has arrived at Rockefeller Center, soon to be turned into that venue's massive annual Christmas tree, a beacon for holiday shoppers in New York. Department stores from tony Bergdorf Goodman to mainstream Macy's have unveiled festive window decorations. And throngs of eager consumers are beginning to crowd the sidewalks of midtown Manhattan, their arms filled with bags of gifts to rival Santa's. It's a scene that's about to be replicated at malls, plazas, and town centers around the nation-and which will soon escalate into the chaotic rush and crush of annual holiday retail mania.

But in the age of smart phones and touch-screens, it's easy to wonder: where are all of the cool new retail technologies designed to make shopping smoother for consumers, the gadgets and interactive displays we see at trade shows and in television and magazine reports on the future of shopping? Where is the augmented reality clothing to "try on" without waiting for a dressing room, or the personalized, Minority Report-style ads offering discounts, flashing on ubiquitous large-scale screens? Where are the 3D, holographic sales assistants to help usher us through the throngs of bargain hunters? Why does there always seem to be a gap between futuristic retail design concepts hyped in the media and the real-world of shopping?

The answer, designers and market researchers say, might simply be because much of the latest tech designed to make shopping easier is actually hard to deploy. Even if the software and hardware exists-and much of it does-there are hurdles to overcome, from the sheer grind of training staff how to use and to service new displays and payment tech, to synching up IT, marketing, and store-design departments internally.

But that doesn't mean that retailers and design firms won't stop coming up with imaginative concepts of the future of retail, or hyping them.

"Every corporation has created 'the future of....' concepts for years, and it's always same thing: how do we define the ideal state, an aspirational experience In retail, that's about convenience, choice, and instantaneous price comparisons," said J F Grossen, a creative director (who goes by his initials, with no periods) at the New York studio of frog, an innovation firm. Recently, frog worked with chip-maker Intel on a concept for a 7-foot-tall interactive retail display that could offer an augmented-reality experience for consumers. The concept drew accolades at the 2011 Consumer Electronics Show in Las Vegas earlier this year. (Disclosure: I consult with frog on writing and editing, but not client-based, projects.)

"Everyone wants to deliver on these concepts, but there are so many barriers. Sometimes a retailer can't support training for their staff for these new experiences," Grossen said. "Even when you want to put technology in a retail environment to provide less interaction with salespeople, you need to be able to offer more high-value interaction with the sales staff."

Testing the waters, but where to leap?

Of course, within the last year, numerous retailers have tried out future-forward technologies to lure in shoppers. Last November, for instance, fast-fashion retailer H&M offered augmented reality clothes at a Manhattan store; shoppers could snap a photo of someone "wearing" a jacket or dress, which appeared to be super-imposed on a person's image as seen through an iPhone's viewfinder. In March of this year, makeup-manufacturer Clinique featured a test-run of its Smart Bar concept, an interactive display using Microsoft's touch-screen Surface table computer, at the Bloomingdale's flagship store on 59th street in New York City. Microsoft is hoping others will catch on; on November 17, the tech giant announced a new, "retail-friendly" version of the Surface computer aimed at stores is ready for pre-orders and will ship in early 2012.

And some retailers, like electronics chain Best Buy, are turning their retail-innovation attention to online shoppers. Also in August, Best Buy and social-media gaming platform Zynga partnered on creating a virtual Best Buy store in the Facebook game CityVille. In early November, Best Buy offered the virtual store again, with a new quest for the holiday shopping season.

But it's not as if these eye-catching design experiments are quickly becoming widespread or even being adopted by many other, less-adventurous retailers, although the technology clearly exists and has received numerous accolades and attention from the press and the public.

"The problems with many of these concepts is that retailers are often testing the waters, trying to figure out where to leap. They picture using new tech or cool design, but for an innovative concept to work and have lasting value, it has to start with how to improve the shopping process for the customer," Gale Daikoku, Research Director of Retail at market researcher Gartner, said.

Retail design that features large touch screens or virtual merchandise are great for promoting a brand as technologically adept to appeal to tech-savvy shoppers, said Daikoku. So these initiatives work especially well when they're rolled out to market a new line of products or at a trade event such as the Consumer Electronics Show or New York's Fashion Week.

Or they can be measured in terms of gaining new fans who might at the very least eventually visit an e-commerce site, as in the case of Best Buy's Zynga program. Within the first week of the CityVille partnership in August, Best Buy gained more than a million new Facebook fans, said Alix Hart, Best Buy's senior director of digital marketing. "While we are still evaluating performance, I'm excited that our programs are driving an unprecedented amount of traffic to BestBuy.com from Facebook and are continuing to scale the engagement with our Fan page," Hart said.

While success stories can be found, industry analysts and design consultants agree that one of the main reasons why most retailers aren't able to make inventive retail concepts a reality both online and off is because their reasons for trying out new tech both in-store and online might be unclear.

What is clear, from speaking to consultants to major retailers and industry analysts, is that retailers want to appear to be engaging in the future of retail, so they rush to invest in conceptualizing or even creating their versions of popular new social media services and hardware and software. But this often happens without retailers placing such efforts within a larger, sales-driven strategy, experts say. Or worse, without consulting with internal IT and other departments that could help new retail innovations roll out on a large scale, versus one-off marketing events.

"I recently gave a presentation of our 'Future of Retail' report to a global telco network (and retailer), and it was the first time they had got their digital and retail teams in the same room together-which is pretty crazy. But they probably are the first to do so in their sector," said Piers Fawkes, founder of PSFK, a trend-research company that counts Apple, Samsung, and Nike among its clients. "Combining internal teams to collaborate has to happen everywhere to create a true transmedia retail experience."

Still, futuristic retail concepts using the latest technologies and platforms have their value, no matter how difficult they may be to execute because of technical or bureaucratic challenges. At the very least, the concepts and trials get both retailers and real-life shoppers thinking and talking about what works and what doesn't. Such feedback then helps the retailers redefine "success," whether it's driving online sales during the holidays or repeat visits to physical stores throughout the year because of heightened brand awareness.

"Most of the [retail] concepts I see have to do with bringing technology into the store environment for some flashy efficiency improvement. For example, some concepts propose that the store will recognize me when I walk in and guide me with lights or sounds to the things it thinks I want to buy," said John Edson, president of innovation and design firm Lunar and a lecturer of design at Stanford University.

"I think this concept is pretty silly - it misses the point of being in a good store - but it holds a kernel of something interesting, which is the whole point of concepts," Edson continued. "They help us envision the future and consider what we like about it."