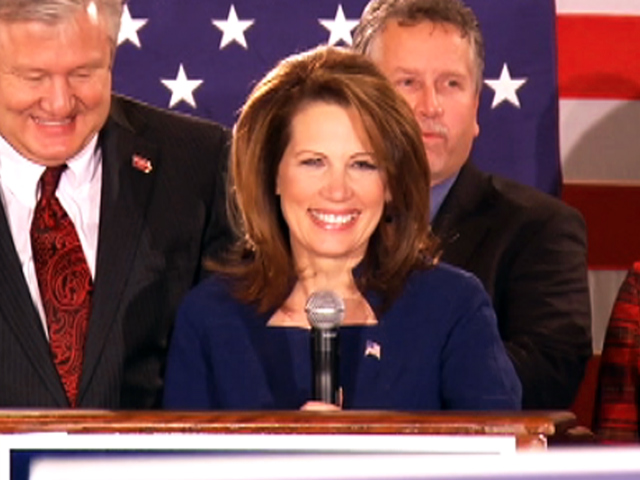 UPDATE: Looks like we spoke too soon. Bachmann decided overnight to leave the race.

DES MOINES, Iowa -- It's been a sad fall for Michele Bachmann in her native Hawkeye State. She won the straw poll here in August, a finish that briefly earned her frontrunner status for Tuesday's Iowa caucuses. But she finished in last-place among the major candidates contesting the caucuses on Tuesday, despite an aggressive retail campaign here that included a recent 99-county, ten-day bus tour.

The Minnesota lawmaker also came in last in the three-way battle for the hearts of the social conservatives who drove Mike Huckabee's 2008 victory here, behind former Pennsylvania Sen. Rick Santorum, who had a fantastic night, and Texas Gov. Rick Perry, who came in fifth. Santorum leaves Iowa with headlines that will mean a boost in fundraising and support for his cash-strapped, long-shot bid; Perry, who has the resources to lick his wounds and try again in South Carolina on January 21 if he wants to, is returning to Texas to reassess his campaign - a sign that he will likely soon leave the race.

Bachmann doesn't have Perry's resources, and in light of her terrible finish, you might expect her to quickly throw in the towel. Yet her apparent decision not to do so - she said Tuesday night that "there are many more chapters to be written on the path to our party's nomination" - should not be a surprise. (One note: Bachmann's campaign manager told the Associated Press that he didn't know if Bachmann was leaving the race - but Bachmann herself gave no indication to do so. And her Iowa Chair Brad Zaun said the candidate and her husband "both told me that they are going to South Carolina," adding, "They are going full steam ahead.")

For starters, there is a pair of debates coming this weekend in New Hampshire, and two more in South Carolina soon after that. Debates are free media for presidential candidates, and they've driven the GOP race thus far - something illustrated most notably in Newt Gingrich's debate-driven rise to the top of the polls. It costs Bachmann virtually nothing to participate in the debates, and she has little reason to leave the race before they take place.

And South Carolina, where Bachmann claims an "organized and energetic grassroots network," is (at least in theory) a good fit for Bachmann in light of its relatively conservative Republican electorate. (Other than the debates, she's skipping New Hampshire.) Even though Bachmann may not have the resources to run television ads in South Carolina, she's a big enough name to garner media coverage simply by showing up. And with Santorum lacking the resources to fully capitalize on his Iowa finish, it's not impossible that Bachmann scores a better-then-expected result in South Carolina that keeps her in the mix. Plus, Bachmann spent $35,000 to get on the ballot in the state, money that would be wasted if she dropped out now.

That's not to say that Bachmann's campaign isn't effectively over. But it doesn't cost her much to stay in the race for another couple weeks - and in doing so, avoid the humiliation of dropping out of the race after the first contest. Barring a shocking result, Bachmann is most likely to bow out soon after South Carolina, when she simply won't have the money to soldier on.