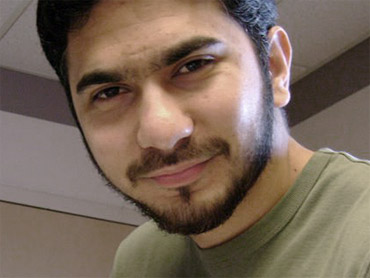 Where is Faisal Shahzad?

The public knew the answer to that question at midnight on May 3, when federal agents pulled the suspected Times Square bomber off a Dubai-bound plane at Kennedy Airport. Since then, Shahzad has disappeared from sight, going a week without appearing in court on weapons of mass destruction and terror charges. Nothing was scheduled for Monday.

Federal authorities say 30-year-old Shahzad voluntarily waived his right to an initial court appearance and agreed to answer questions, possibly without a lawyer and while in custody at an undisclosed location.

His decision to talk and the open-ended undetermined duration of the hidden dialogue - one week and counting - are allowed by law. But they're also uncommon for a suspect without a formal plea deal with prosecutors.

"You usually don't see a defendant cooperate this quickly, because his cooperation is really his only bargaining chip," said Robert Mintz, a former federal prosecutor now in private practice.

Authorities "will continue to question him for as long as it takes to get important and time-sensitive information," Mintz added. "But they won't interrogate him indefinitely, even with his cooperation. At some point, it's in the government's interest to get him counsel and have him appear before a judge to ensure his waiver was done knowingly."

Shahzad, a Pakistan-born U.S. citizen who returned from a visit to his homeland in February, is accused of abandoning a bomb-laden SUV in Times Square on May 1. Though the crude, homemade device malfunctioned, it spread panic and set off an intense manhunt before Shahzad was captured two days later.

"He's the magic jihadist," said civil rights lawyer Ron Kuby, who has represented several terrorism case defendants over the last two decades. "First you see him and then he disappears into some Manhattan version of Guantanamo, but with worse weather and better coffee."

Kuby said the questioning of Shahzad was solely to gain intelligence because the evidence was so strong against him before he was caught.

He said Shahzad was probably not thinking about trying to win leniency at sentencing.

"My experience with these folks, particularly the Islamists, is they love to talk. Their goal isn't to beat the rap when they're caught. Their goal is either to die as a martyr, or commit mass murder for political or religious reasons."

Defendants normally are brought to court within a day or two of their arrest to formally face charges, and that was the expectation with Shahzad: A middle-of-the-night statement by prosecutors announcing the arrest said he would appear later the following day.

But with the federal courthouse overrun with reporters and surrounded by news cameras on May 4, word came that the appearance had been indefinitely postponed because of his continued cooperation.

Since then, the U.S. Attorney's office in Manhattan and FBI have steadfastly refused to discuss Shahzad's whereabouts or conditions of confinement. His name is absent from a U.S. Bureau of Prisons online database. Justice Department spokeswoman Tracy Schmaler declined to say where Shahzad is being held.

Shahzad would have had to sign a written waiver and keep reiterating that he was sticking to it in order for his cooperation to continue, said William H. Devaney, another former federal prosecutor.

That's something he could do on his own. But enough time has passed that prosecutors "would probably want to play it safe and make sure he has counsel," Devaney said

A criminal complaint made public last week gave some clues about Shahzad's cooperation: It said he had admitted receiving bomb-making training in the lawless tribal areas of Waziristan, where both al Qaeda and the Pakistani Taliban operate. Attorney General Eric Holder claimed Sunday that investigators had evidence that the Pakistani Taliban helped facilitate and finance Shahzad, saying, "They were intimately involved in this plot."

"Clearly now our understanding is that the TTP had a major role in this incident," U.S. counterterrorism adviser John O. Brennan said on CBS's "Face the Nation."

"He was trained by them. He received funding from them. He was basically directed here to the United States to carry out this attack. Investigations [are] ongoing," Brennan told "Face the Nation" anchor Bob Schieffer.

Ken Wainstein, a former U.S. attorney in Washington who headed the Justice Department's anti-terrorism efforts and served as homeland security adviser under President George W. Bush, said cooperation does not always mean a defendant is trying to win leniency.

Sometimes, he said, a defendant's cooperation is motivated by "just sheer pride in what he's done, a desire to lay out or even boast about the crimes he committed."

"Some terror suspects since 9-11 have been happy to talk about the terrorist acts they've committed," he said.

Cooperation does not always lead to leniency, he said. He cited the case of a suspect in a triple murder who waived his rights and spent several days giving a series of post-arrest confessions, only to be charged with a death-penalty case and ultimately receive a sentence of life in prison without parole.

The arrest of Shahzad has renewed a debate over whether terror suspects should be read their Miranda rights. Critics argue authorities should have treated him as an enemy combatant and not advised him of his rights until law enforcement gained the information needed to prevent other attacks.

"If he had taken a lawyer, he could have just stopped talking and that would have been the end of it," said Annemarie McAvoy, a law professor at Fordham University. "Luckily, he decided to continue talking. He didn't have to."

Added McAvoy: "These are not regular crimes. This is an orchestrated attempt by foreign groups to attack Americans as well as Americans on American soil."