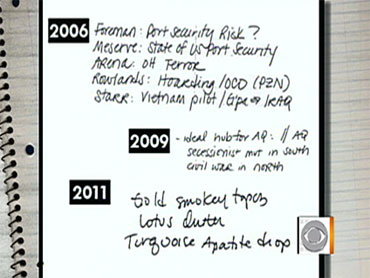 Have you noticed your handwriting changing over time? Has it deteriorated? Why does it happen?

"The Early Show" invited Michelle Dresbold, handwriting expert and author of "Sex, Lies and Handwriting" on the show Tuesday to assess the anchors' handwriting from various points in their lives. She pointed out some of the reasons why and how their penmanship has changed.

For instance, when co-anchor Jeff Glor spent a summer away from his family in France at age 15, he wrote downhill and in cursive to his family in the U.S.

Dresbold said his handwriting indicated that he was depressed during that time because he wrote downhill and in cursive, which indicates emotion. Glor affirmed he was down at that time being so far from his family.

Dresbold explained some of the factors that may affect handwriting include your psychological state. If you are depressed, for instance, she said people will write in a downward angle. If one is happy, she said the end of sentences will slant up.

She also assessed handwriting from people that suffer from illnesses, such as arthritis and Alzheimer's. Arthritis, she said, is indicated through angular writing. People with Alzheimer's, she said, write less fluidly.

Pointing to handwriting by Alzheimer's sufferer President Ronald Regan, Dresbold observed, "If you look, things will start to blob up. ... It will no longer be smooth."

For more with Dresbold and her handwriting observations and what you should look for in your own handwriting, click on the video below.