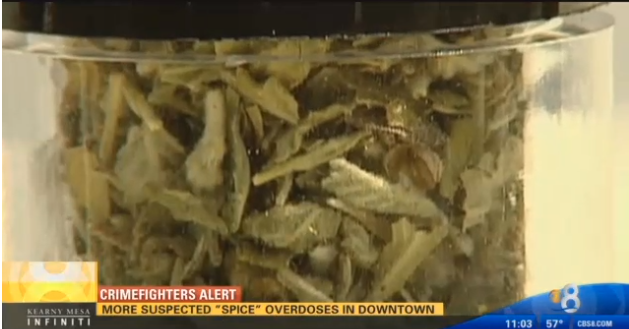 Users of increasingly popular street drugs called K2 or spice, which are made from mixtures of herbs laced with synthetic cannabinoids and other chemicals, are showing some incredibly strange behaviors.

Indeed, as the use of these so-called synthetic-marijuana drugs escalate among U.S. teens and young adults -- who typically smoke or vape the drugs -- TV and newspaper accounts report that users are passing out on sidewalks, stumbling out into traffic, and "looking and acting like zombies."

People on synthetic cannabinoid products can act anywhere from a bit confused to completely out of their minds, depending on the dose of K2 used and an individual's susceptibility to the drug, said Dr. Anthony Scalzo, a professor of pediatrics and chief of toxicology at Saint Louis University School of Medicine in Missouri. [3 Dangerous New Drug Habits in Teens]

"This is extremely dangerous stuff, and it's getting more dangerous" as manufacturers continually find new ways to tweak the chemicals in the drug to skirt laws that made some compounds used in K2 illegal since March 2011, Scalzo said. He first discovered the health dangers of K2 in 2010, after noticing a spike in calls to the Missouri Poison Center about young people who had smoked K2. He said these users thought the drug's effects would be similar to those of marijuana, but they instead experienced stronger symptoms, including hallucinations, extreme agitation, a rapid heartbeat and extremely high blood pressure.

Other changes in mood, thinking and perception have been linked with synthetic cannabinoids. Their use has been associated with paranoia, which is an unreasonable distrust of others; anxiety; panic attacks; and psychotic episodes. Together, these mind-altering behaviors have been labeled as the "zombie effect," according to K2/Zombie DC, a public-education campaign based in Washington, D.C., that uses zombie-themed messages to raise awareness among teens and parents of these drugs' dangers.

"Synthetic cannabinoids have chemicals in them that were never meant to be inside the human body," Scalzo told Live Science. [11 Odd Facts About Marijuana]

Some versions of the drugs are illegal and are sold on the street, but the versions that are legal are sold in stores, where their glitzy packages marketed to young people may make them look mainstream, natural and safe, Scalzo noted. But the herbal blends, which may resemble potpourri, "can make people do what they normally would not do either to themselves or to others," Scalzo said.

In 2011, the U.S. Drug Enforcement Administration (DEA) placed five compounds that are commonly found in K2 on its list of illegal substances, to help clamp down on sales. But manufacturers responded by tinkering with the chemicals to sidestep the regulations.

This led to the creation of newer versions of K2 that are even more harmful than early versions, Scalzo said. The newest products on the street can cause low blood pressure and a slow heart rate, and may even result in coma, seizures and kidney damage, he said.

And because the compounds in the drugs can constantly change, their effects on users can be unpredictable and, in some cases, deadly.

Exactly how the compounds in K2/spice work to produce their effects is unclear, Scalzo said. They may act directly on the specific receptors in the brain that can bind these chemicals, and they may change how the brain works in the short term and, potentially, the long term, Scalzo explained.

For example, Scalzo said, when synthetic cannabinoids attach to receptors in the brain and then interact with dopamine -- a brain chemical that affects movement -- it may cause users' arms and legs to feel stiff or locked up. But when the drugs interact with serotonin -- a brain chemical responsible for sleep and dreams -- it may cause users to feel zombie-like and out of it, he said.

Experts don't fully understand what's happening in the brain to cause these bizarre behaviors, agreed Dr. Deepak D'Souza, a professor of psychiatry at Yale University School of Medicine who has studied the effects of cannabinoids and its links with psychosis for the past 20 years. One possibility is that the drugs lack a compound found in marijuana that may act as a brake, preventing bizarre behaviors.

Regular marijuana contains the cannabinoid THC (tetrahydrocannabinol), which can attach to receptors in the brain to activate the release of chemical messengers that can make people feel paranoid or anxious, he explained. But the marijuana plant also produces another compound known as cannabidiol, or CBD, which stops the brain from continuing to release these chemical messengers, he said.

As a result, when people smoke pot, "CBD reduces the negative effects of THC," D'Souza said. However, this is not the case when people use K2 or spice, he said. Although synthetic cannabinoids contain THC, they don't contain CBD, so the release of chemical messengers in the brain goes unchecked, thus creating more undesirable effects, D'Souza speculated.

When young people hear the term "synthetic marijuana" or "fake weed" to describe synthetic cannabinoid products, it gives them the false impression that spice or K2 will have effects similar to those of marijuana.

"But there is a massive difference between spice and marijuana," D'Souza said. The compounds found in spice can be anywhere between 10 and 200 times more potent than THC, the main psychoactive ingredient in marijuana, and they can produce more robust effects, he said.

And although the use of regular marijuana has been linked with psychosis, or a loss of touch with reality, users of synthetic cannabinoids may have more severe psychosis reactions that involve more out-of-control behaviors than users of marijuana do, D'Souza said.

Moreover, researchers aren't sure what happens after the compounds in spice activate the brain's cannabinoid receptors to cause users of the drug to lose control of their thoughts and actions, D'Souza. This may be related to differences between synthetic and plant-based cannabinoids, or to other components of spice, he said.

But a major challenge in understanding the effects of spice on the brain is that "the chemical composition of the drug is a constantly moving target, " D'Souza said. Unlike marijuana, whose basic makeup is generally similar no matter where the plant is grown, the compounds in a batch of spice can be very different from one day to the next, even if you buy the drug from the same place, he said.

"Users of spice or K2 don't really know what chemicals they are getting," D'Souza said.

The name is slapped on a range of products that mostly contain at least some synthetic cannabinoids or combinations of them; the products are also sometimes spiked with other drugs, such as amphetamines or the tranquilizer benzodiazepine, D'Souza said. [The Drug Talk: 7 New Tips for Today's Parents]

In addition to the tremendous variability in the type and amount of compounds from batch to batch and product to product, spice users may not be familiar with the amount of the drug needed to get high, D'Souza. This may cause people to use too much of this potent drug, which can also provoke altered behavior, he said.