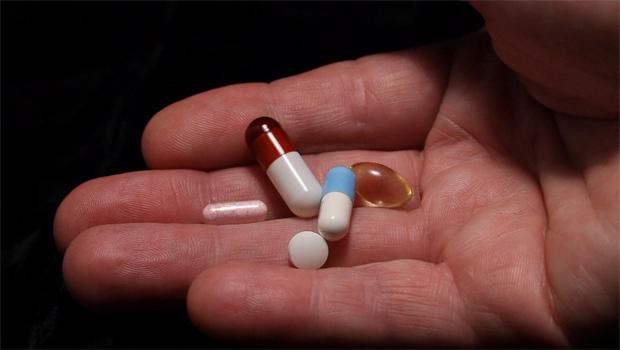 How real is the placebo effect? Can a pill actually cure an ailment, even if that pill contains no medicine at all? Our Cover Story is reported by our Susan Spencer:

You may know it from those mildly embarrassing TV ads. But Linda Buonanno knows it from daily life. She has struggled with IBS -- Irritable Bowel Syndrome -- for two decades.

“It’s horrible. Sometimes I could be fast asleep and wake up out of a dead sleep at 6:00 in the morning and just keel over in pain,” she said.

Desperate for relief, she responded immediately when she learned of a new study at Boston’s Beth Israel Deaconess Medical Center.

“I made an appointment, and I went down there,” she told Spencer.

Buonanno came home with fingers crossed, and a three-week supply of pills. The results seemed miraculous. “As the days went on after a week, I kept feeling better and better. Now I’m thinking, ‘What’s in this?’”

So what WAS the special something in those pills? It was … absolutely nothing. Linda was taking placebos, containing no real medication at all.

What makes her story even more astonishing is that, unlike traditional experiments with placebos, she was TOLD she was taking placebos!

“I remember the first day I took it, I said, ‘Why am I even taking this? You know, it’s like a waste of my time,’” Buonanno said. “But when I saw that I felt better, I’m thinking, ‘Well, maybe he just told me it was a placebo. And it’s a new medication they’re trying out and didn’t want me to know!’”

Ted Kaptchuk, a professor at Harvard Medical School who ran the experiment, said his colleagues initially thought he was crazy at the beginning of the study. But it worked: He says roughly 60 percent of the subjects in his study reported getting better, even though they knew they were taking a placebo.

A placebo, Kaptchuk explained, is an inert substance, usually something like cellulose, starch or sugar. But the “placebo effect” goes well beyond the actual pill.

“Placebo effect is everything that surrounds that pill -- the interaction between patient, doctor or nurse,” Kaptchuk said. “It’s the symbols, it’s the rituals. These are powerful forces.”

Doctors have understood the power of placebos at least since they were first used in clinical trials in the ‘50s, but fake pills work only in certain cases.

“There are a lot of illnesses you don’t give placebos for, [like] cancer, lowering cholesterol,” Kaptchuk said. “Basically the scope where a placebo effect is relevant is any symptom that the brain can modulate by itself.”

In those cases, just making an appointment, going to a doctor and taking a pill suggests something may happen.

Dr. Arthur Barsky, a psychiatrist at Brigham and Women’s Hospital in Boston, says that people will report some symptomatic relief from taking a substance that is not biologically active about 35 percent of the time. “It’s very impressive.”

He says people even report side effects from placebos. Clearly we are highly-suggestible creatures.

“There are some studies, for example, with asthma, [where] you can provoke an asthmatic attack by showing someone a pollen that they’re allergic to, but it’s in a sealed jar,” said Dr. Barsky. “I had a patient who had allergic dermatitis to cats. And she saw a cat on the television screen … and started to itch.”

Aware of the power of the mind, as many as half of all American doctors admit to having prescribed some form of placebo, according to a 2008 BMJ study.

Spencer asked, “Why would this even occur to a doctor in the first place: ‘I’m gonna give you something that as far as I know isn’t gonna do anything’?”

Dr. Barsky laughed: “Well, when you think about it, there are a lot of things that we do that aren’t directly curative that make a difference -- vitamin pills, iron pills, cold packs, heat packs, giving antibiotics for a viral infection because the patient really wants it.”

And it’s not just that the patient imagines feeling better. Dr. Kaptchuk showed Spencer brains scans of patients who responded to placebo treatment who were in pain: “We actually see part of the pain matrix being activated that would change this sensation of pain,” he said.

Just the act of taking a pill, even a fake one, can coax the brain into producing its own helpful chemicals. “In fact, we know that giving the pill in the context of the health care encounter activates neurotransmitters,” Dr. Kaptchuk said.

“Something chemically is happening? That’s amazing to me,” Spencer said.

“It’s really amazing to me [and] I’ve been in this business a long time!” Dr. Kaptchuk laughed.

Neurologist Alberto Espay of the University of Cincinnati, who specializes in Parkinson’s disease, says, “I know that the phenomenon of my patients changing by virtue of nothing else than their expectations, is real.”

He says drugs used in Parkinson’s help the brain make dopamine. Turns out, placebos do, too.

“And this can be measured objectively? Measurable changes within the brain?” Spencer asked.

Bob Walton has lived with Parkinson’s for more than a decade. Dr. Espay enrolled Walton in a study supposedly comparing an expensive drug to a cheaper one.

“I actually felt a little better after I got the expensive one,” he said.

Well, guess what: “He did an interview with me about an hour-and-a-half after it was over with,” Walton recalled. “And he said, ‘They were both saline solutions.’ Both were placebos.”

And of course, there was no price difference at all. Yet the patient who thought they’d taken the more expensive drug felt more improvement. Not only did the supposedly expensive drug do twice the job, it did just as well as a real Parkinson’s drug.

“So they thought that because it was expensive it has to be good?” Spencer asked. “And that alone can affect things physiologically?”

The lesson here, says Dr. Espay: When patients believe in their medications, those medications just may work better.

Spencer said, “Now, to do your experiment you had to mislead people. How did you feel about that?”

In fact, outside of clinical trials like Dr. Espay’s, the American Medical Association frowns on deception in treating patients. “Patients cannot be given a placebo without informed consent, and [being] told clearly, transparently what it is,” Kaptchuk said.

But given Linda Buananno’s success with placebos for her IBS, it may not matter if patients know … which raises an interesting question:

“I think the next step is, how do we concretely use placebo effects in clinical practice?” Kaptchuk said.

Dr. Barksy believes there are some ways in which patient may still get the benefit without being deceived: “You tell the patient, ‘We’re gonna give you the active medicine, but on some days you’re gonna get a placebo. And if that were to work you would then lessen the chance of addiction, tolerance. [And] it’s cheaper.’”

Meanwhile, Buananno’s symptoms are back, full force, but she has an appointment with Professor Kaptchuk. “I’m possibly gonna go on placebos again and see what happens,” she said.

“It seems so strange to hear somebody say, ‘I’m going on placebos,’” Spencer said. “It’s like saying, ‘I’m about to start taking nothing again. I’m really excited!’”

Brownie recipes from "Joy of Cooking"