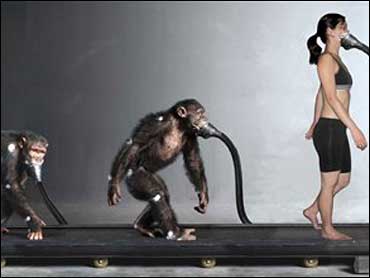 Why did humans evolve to walk upright? Perhaps because it's just plain easier.

Make that "energetically less costly," in science-speak, and you have the conclusion of researchers who are proposing a likely reason for our modern gait.

Bipedalism — walking on two feet — is one of the defining characteristics of being human, and scientists have debated for years how it came about.

So, in the latest attempt to find an explanation, researchers trained five chimpanzees to walk on a treadmill while wearing masks that allowed measurement of their oxygen consumption. The chimps were measured both while walking upright and while moving on their legs and knuckles.

That measurement of the energy needed to move around was compared with similar tests on humans and the results are published in this week's online edition of Proceedings of the National Academy of Sciences.

It turns out that humans walking on two legs use only one-quarter of the energy that chimpanzees use while knuckle-walking on four limbs. And the chimps, on average, use as much energy using two legs as they did when they used all four limbs.

However, there was variability among chimpanzees in how much energy they used, and this difference corresponded to their different gaits and anatomy.

One of the chimps used less energy on two legs, one used about the same and the others used more, said David Raichlen, assistant professor of anthropology at the University of Arizona.

"What we were surprised at was the variation," he said in a telephone interview. "That was pretty exciting, because when you talk about how evolution works, variation is the bottom line, without variation there is no evolution."

If an individual can save energy moving around and hunting and spend more of it on reproduction, "that's how you end up getting new species," he said.

Walking on two legs freed our arms, opening the door to manipulating the world, Raichlen said. "We think about the evolution of bipedalism as one of first events that led hominids down the path to being human."

Theirs is the latest of several explanations for walking upright. Among the others have been the need to used the arms in food gathering, the need to use the upper limbs to bring food to a mate and offspring and raising the body higher to dissipate heat in the breeze.

The research was supported by the National Science Foundation and the L. S. B. Leakey Foundation.