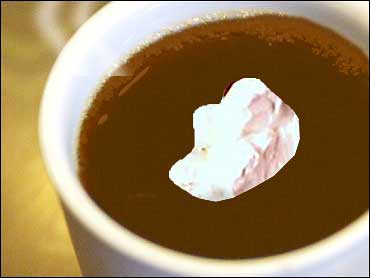 Antioxidants in cocoa might help your heart by keeping your blood vessels relaxed, thus easing blood pressure and helping circulation.

So says a study in Proceedings of the National Academy of Sciences. The study shows that cocoa's antioxidants — called flavonoids — coax the body into making more nitric oxide, which relaxes the blood vessels.

Don't Reach For A Mug Yet

He explains that cocoa's flavonoids taste bitter and often get destroyed to make cocoa taste better. "It's all in the processing," he says.

People should closely examine products touting flavonoids, Hollenberg says. "You have to demand that they tell you the flavonoid content.

"I mean, I notice that some of the ads on cocoa say that 'This contains more than 70 percent cocoa powder,' which is a nice claim but it has nothing to do with flavonoids. And most people don't measure flavonoids, so they don't tell you," Hollenberg continues.

Flavonoids are found in many plants, including onions, broccoli, and tea. "Cocoa stands by itself; it's extraordinarily rich" in flavonoids, says Hollenberg.

Could you skip cocoa and get the same amount of flavonoids from other foods? "Well, yes and no," Hollenberg says. "You have to eat a lot of broccoli and onions and drink a lot of tea, but you can."

Chocolate also contains flavonoids, "but the problem with chocolate is the burden of fat it carries," Hollenberg says.

"Now, I'm hoping that people actually make a flavonoid-rich cocoa that will be available for sale and that people incorporate into their diets. It hasn't happened yet, but I'm hoping it will," says Hollenberg.

The study he worked on was backed by candy maker Mars Inc. Here is an overview of the tests that were done and their results.

In one set of tests, healthy young men drank beverages made from cocoa powder that was high or low in a type of flavonoid called flavonols. Mars supplied the cocoa powder.

Each man tried one of the drinks after an overnight fast. More than two days later, they fasted again and then tried the other drink. Their blood vessels relaxed more after drinking the flavonoid-richer cocoa.

Next, scientists isolated and purified cocoa's flavonols. Some participants got a drink containing those flavonols; others got water without flavonols. Blood vessels were more relaxed after drinking flavonols but not pure water. That finding suggests that those particular flavonols — not something else in cocoa — are important, the researchers write.

Lab tests on rabbits' hearts also backed the findings. The specific flavonol that stood out was called epicatechin, the study shows.

The researchers also headed to Panama, where the Kuna Indians traditionally drink three or four cups of homemade cocoa per day.

The Kuna Indians who live in their traditional location — Panama's San Blas islands — have rare cases of high blood pressure and heart disease compared with Kuna Indians who move to Panama's mainland, who drink less than four cups of the cocoa per week.

"You take all the known environmental factors and put them together, and they don't bring blood pressure that low. So we think it really is something special about eating these flavonoids," he says.

Blood pressure tends to rise with age. But after age 60, average blood pressure for the Kuna Indian islanders is 110/70, Hollenberg says.

Blood pressure of 110/70 is in the normal range. In the U.S., more than half of people age 60 and older have high blood pressure, according to the National Institutes of Health's National Heart, Lung, and Blood Institute.

The Kuna let their cocoa roast in the sun, Hollenberg notes. "What the Kuna Indians do is they treat it very gently. Not to retain the flavonoids; that's just the way they do it," he says.