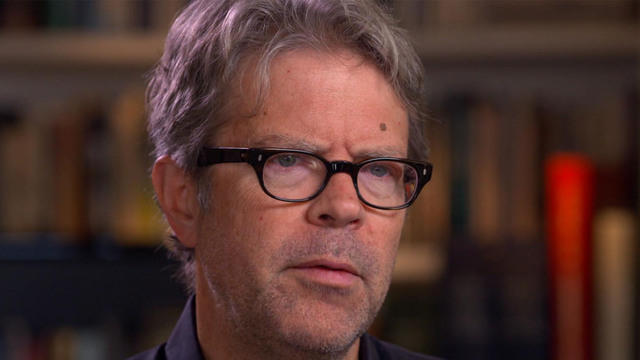 Exactly 100 years ago Saturday, the U.S. government passed a groundbreaking law to protect migratory birds that fly across the Atlantic. To mark the anniversary, National Geographic magazine helped declare 2018 "The Year of the Bird." It kicked off the observance with an essay from acclaimed author Jonathan Franzen, who's also a bird lover and a conservationist.

It was the experience of seeing a brightly colored warbler sitting in a tree 18 years ago that changed Franzen's life forever, reports CBS News' Alex Wagner. He had walked by that same tree hundreds of times before.

"And the scales had fallen from my eyes. There was this other world….It was like being introduced to sex," he said.

In the two decades since then, Franzen has traveled to see as many of the world's nearly 10,000 bird species as possible.

"I've actually birded on all seven continents," he said. "There is a bad kind of birder who only cares about increasing the length of his or her list of birds seen….I have a little bit of that but there's another part of me that, I think, is a good birder which is – this is a way to have an experience."

In his January essay for National Geographic magazine "Why Birds Matter, and Are Worth Protecting," Franzen compares birds to humans, writing: "They build intricate homes and raise families in them. They take long winter vacations in warm places. Cockatoos are shrewd thinkers, solving puzzles that would challenge a chimpanzee, and crows like to play."

"To the extent that there is still a natural world, the birds are the best ambassadors for it because you can't go anywhere on this planet without running into birds. You can be 90 miles inland in Antarctica and there are the emperor penguins," he said. "You can be in the most bleak South Pacific ocean and there are the albatrosses, there are seagulls nesting in the desert….I've seen great birds outside my window on the Upper East Side in Manhattan. They're everywhere and always not really caring very much about us. They're just being themselves."

But that doesn't mean that humans aren't affected by birds. Franzen remembers one experience in east India when he was approached by two great hornbills.

"They flew in, and it sounded like some meteorological event. Their, their wings are so huge. It's this woof, woof, woof as they come in….And I became aware that somebody was shouting," he said. "And I realized I'm shouting. That is spontaneous joy that I am emitting."

The joy was contagious when Wagner and Franzen came upon a pair of owls. It's moments like those that made Franzen fall in love with birds.

"And because I had fallen in love with them, I wanted to help them," he said.

Birds may have the gift of flight, yet Franzen points out they are unable to master their own environments. Humans are responsible for the climate changing too quickly for birds to adapt. Franzen wonders if birds are valued enough for us to make the effort to protect them.

"So part of my mission has become to try to remind people that there are other things to think about if you care about nature than just climate change," he said.

This month, National Geographic is highlighting how birds are able to migrate thousands of miles every year and how a changing landscape is making it harder for them.

"The contrast that is interesting to me is between a kind of fire and brimstone Christianity. 'You are damned unless you change your ways' which is kind of the climate conversation. And then, on the other hand, you have this older Catholic, particularly Franciscan, from St. Francis who was all about, hey, birds. I love the birds. I'm gonna write to the emperor and ask him to put grain out in the fields on Christmas Day to feed my friends the larks," Franzen said. "His approach to the world was love, love, love, love, love. And I think for meaningful action of any kind, love is a much better motivator than fear of damnation."