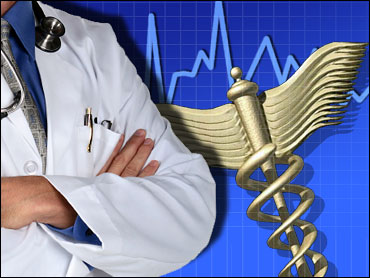 During the course of a normal business day, Gregg Feinerman likes to send out Twitter updates. He's just like tens of millions of folks around the country.

But there's a difference: Feinerman is a Lasik eye surgeon.

"All the people working in our office are doing it, anyway, and I said, 'Why not also do it for patients?'" Feinerman said.

Feinerman's tweeting obviously is a rarity for those in his profession. More than a decade after the Internet went mainstream, only an estimated 17 percent of physicians have electronic health record systems.

The big trade associations representing the medical establishment, such as the American Medical Association and the Medical Group Management Association, can't estimate how many of their members use the microblogging service, or for that matter, how many of them deploy consumer-facing technologies in their daily interactions with patients. But if anecdotal evidence is a fair barometer, assume the following: Doctors who grew up in an earlier era are likely to cling to their notepads and pens until the day they retire their stethoscopes. For their younger colleagues, by contrast, consumer technology is just another way to connect with patients.

In its Orange County, Calif., offices, the Feinerman Vision Center staff has set up a Mac notebook in the waiting room with a private Twitter account. As an eye operation concludes, updates go out that enable a patient's friends and family to read how the procedure has gone.

"It's just a different way to do outreach," Feinerman said.

So why aren't more doctors early adopters of services like Twitter? As soon as a new MRI machine or microscope comes out, they tend to be all over it. But practitioners say information technology is hard for older members of the profession to incorporate into their daily routines.

In part, that may be because there are few applications in health care that actually delight doctors. There are still no medical equivalents to Apple's iTunes or iPhone. And like the rest of us, doctors are creatures of habit. But change is happening. With each graduating class of doctors, more physicians feel comfortable with technology.

A survey published in December by Vanderbilt University Medical Center hinted at this trend, though from a different perspective. The survey focused on doctors, mostly on the younger side of the spectrum, trained in IT-rich environments. Of the doctors who wound up working at offices with more rudimentary systems, the vast majority expressed unease about their ability to offer proper care to patients.

A medical generation gap, if you will, is coming into fuller view. In fact, it's something I first saw a few years ago, when I was rushed to the hospital after a hard fall that cracked my head open.

Upon my arrival at the emergency room, the thirtysomething physician who attended to me took notes on a tablet computer. He could then transfer the data from the consultation to a central server over a wireless network. (He also had a high-end smartphone hanging from his belt, just in case.)

As a technology reporter, all this intrigued me more than learning what was going on with my badly smacked noggin.

The doctor told me that age--usually the 40th birthday--often defines a physician's predisposition toward incorporating high tech into his or her daily interactions with patients.

A few hours later, I was in the recovery room when another ward doctor approached me. As he took out a pen to scribble into a notebook binder, I just had to ask.

He gave me a hard look and mumbled something about how it wasn't his cup of tea. I'd say he was at least in his mid-50s. That was all I needed to know.

"If you don't use tech, per se, in your daily life, at all levels, and you're not comfortable with it, then it's unlikely that you're going to be as speedy (to embrace) technology," noted Dr. Todd Rothenhaus, senior vice president and chief information officer of Caritas Christi Health Care, the second-largest provider in Massachusetts. "If you're not a touch typist...or if you never use a mouse or are accustomed to using a PC as part of your daily activity, then there's going to be an enormous barrier."

Rothenhaus may be right. The hope within the Obama administration is that many of those barriers will crumble in the aftermath of the passage of the $787 billion economic-stimulus package, which includes $19 billion for health information technology and another $10 billion for the National Institutes of Health.

Clearly, the U.S. population is behind a concerted effort to digitize medical records, according to a recent poll (PDF) conducted by NPR, the Kaiser Family Foundation, and the Harvard School of Public Health:

"Fully three in four say it is important for their health care providers to use electronic medical records (EMR). A large proportion of the public also sees benefits to nationwide adoption of this technology. Majorities say that if the United States adopted greater use of an EMR system, their own doctors would do a better job coordinating their care (72 percent say this is at least somewhat likely), that the overall quality of care in the country would be improved (67 percent), and that fewer people would get unnecessary medical care (58 percent.) Just over half (53 percent) say there would be fewer medical errors."

In theory, that sounds like a slam dunk. But life usually turns out to be a bit more complicated. Consider the experience of James Dom Dera. An assistant professor of family medicine at Northeastern Ohio Universities Colleges of Medicine and Pharmacy, his practice made the decision to become a "paperless office" two years ago. However, the transition to electronic records proved more difficult than he envisioned.

Dom Dera, who was accustomed to quickly jotting down notes taken during patient visits and flipping through papers, says that only in the past year has he gotten his typing groove back.

"I'm actually starting to see the benefits of a class I took in high school: typing," said Dom Dera, who, at 37, is relatively young. "I've gotten pretty good at typing and clicking while still maintaining eye contact. At the same time, I'm cognizant that sometimes it's more appropriate for me to stop typing, close my laptop, and just listen. I guess that's the art versus the science of medicine."

Dom Dera and his colleagues, including the nursing staff, now use tablet PCs connected to a wireless network. Nothing is stored locally, and the data gets transmitted in real time without the need for a Save button, he said.

That doesn't sound anything like my doctor; he's terrific but definitely old-school. Getting back up to speed when it comes to using a keyboard only hints at the challenges older physicians face in trying to adapt to a world in which new technologies regularly proliferate throughout the larger society.

"That's exactly it," said Lasik surgeon Feinerman, who is 42. "I grew up in the computer age. This is just my generation. I still feel old when I come to the office, and most of the staff is in (its) 20s and 30s. But I'm trying to use tech and have a proactive attitude to make our practice fun and keep people in touch."
More From CNET:
Health Records Enter Into The Digital Age
Microsoft, Google In Healthy Competition
Q&A: Electronic Health Records And You