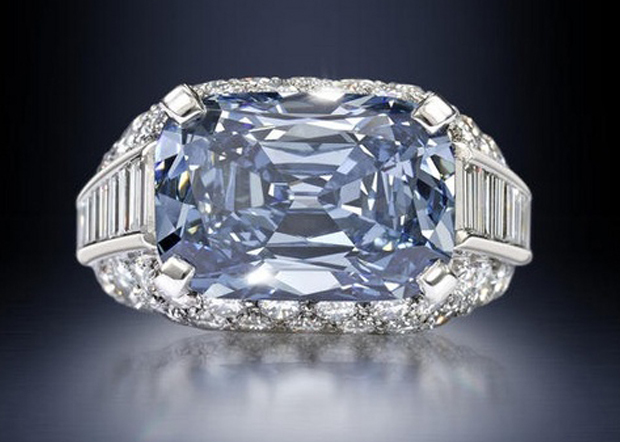 A stunning blue diamond broke a world record today, fetching a price of 6.2 million British pounds (about $9.6 million), or about $1.8 million per carat, according to auctioneer Bonhams.

The diamond is a brilliant blue and is set in a ring made by Italian jeweler Bulgari around 1965. The high price likely comes from the diamond's unusual color as well as its posh setting: Bulgari is a company beloved by the Hollywood glitterati, and blue diamonds are rarely up for sale. This particular blue diamond also happens to be a large chunk of ice at 5.3 carets.

The diamond is a "fancy deep-blue" stone, terminology that describes its intensity of color. The blue sheen comes from boron atoms intermixed with the carbon that makes up the diamond's structure. According to Bonhams, less than 1 percent of all diamonds mined are blue diamonds.

"Blue diamonds, especially those over 5.00 carats, are extremely rare to see on the market and continue to be highly sought-after," Jean Ghika, the director of Bonhams' European jewelry department, said in a statement. "We are honored to have handled the sale of such a unique gem."

The previous record for the price of a diamond per carat was $1.68 million, according to Bonhams.

The most famous blue diamond in the world is the Hope Diamond, which now resides at the Smithsonian Natural History Museum. Crudely cut, the Hope Diamond was 112 and 3/15 carats and likely came from a mine in Golconda, India, according to the Smithsonian. King Louis XIV bought the diamond from a French merchant who picked it up in India and later had it recut into a 67 and 1/8-carat stone. The diamond remained in the hands of French royalty until 1792, when it was stolen during an episode of unrest and looting. [Sinister Sparkle: 13 'Cursed' Gems]

The diamond's path then becomes foggy until 1839, when it popped up in the gem collection of banking heir Henry Philip Hope. The diamond then passed through the hands of multiple private sellers, gracing a tiara at one point before being set as a pendant. The Hope Diamond was donated to the Smithsonian in 1958. Three-hundred-plus years of recutting has whittled its weight down to 45.54 carats.

Blue diamonds aren't the only unusual color out there. Very rarely, miners unearth red diamonds, which are sometimes mistaken for garnets or rubies. Only three red diamonds weigh more than 5 carats, including the Kazanjian Red Diamond, which went on display at the American Museum of Natural History in 2010.

The World's Most Famous Rocks

Gold Quiz: From Nuggets to Flecks