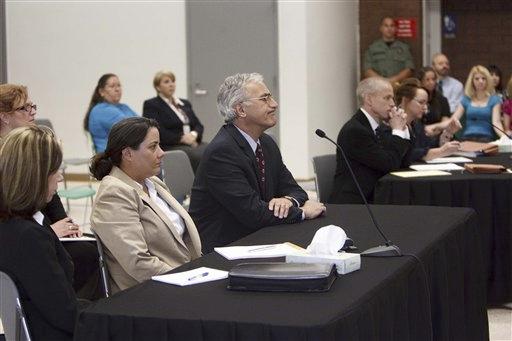 With Dan Rather's announcement that he will step down as anchor and managing editor of the CBS Evening News in March, speculation is on about who will next occupy one of the most visible chairs in American journalism.

CBS News President Andrew Heyward and CBS Chairman Leslie Moonves have both indicated that potential candidates inside and outside CBS will get a look before a final decision is made. Moonves told The Wall Street Journal, "We're still contemplating a lot of people inside and outside the organization."

CBS said nothing of a potential successor, but two men inside the news division have often been mentioned as possible Rather heirs: White House Correspondent John Roberts and 60 Minutes Correspondent Scott Pelley.

Both men have served as White House correspondent, which is viewed as a stepping-stone to the anchor chair at CBS. Roberts also anchors the Sunday Evening News and often fills in for Rather when he is off. Some TV writers and critics peg Roberts as an early favorite, although CBS News has remained silent on the issue.

Roberts, a Toronto native, joined CBS News in 1992, and has been the White House correspondent since 1999. He worked as an embedded correspondent during the war with Iraq, reporting from the frontlines.

Pelley, who joined CBS News in 1989, served as White House correspondent from 1997 to 1999, where he covered the investigation of President Clinton by special prosecutor Ken Starr. He has been a 60 Minutes correspondent since 1999.

Another could-be heir to the news throne inside CBS is Early Show Co-anchor Harry Smith, 53. Smith worked for CBS News for 13 years as an anchor, correspondent and featured contributor for various broadcasts before becoming the Early Show co-anchor in 2002.

Some television writers have speculated that Chief Washington Correspondent Bob Schieffer could be a possible interim anchor if a successor isn't on board when Rather vacates the anchor chair. Rather is staying on at CBS News as a 60 Minutes correspondent.

There's already been the customary and lively round of speculative name-dropping about possible successors outside CBS. Among the many who have been mentioned are Ted Koppel of ABC, Tim Russert and Matt Lauer of NBC and Brit Hume of Fox.

Rather spoke of his decision to step down to more than 100 staffers in the CBS newsroom on Tuesday afternoon. In brief remarks, the newsman said that he had considered retiring since the late 1990s. He added that the Sept. 11, 2001, terror attack prompted him to put aside such thoughts.

He portrayed his decision to leave the anchor chair as a "mutual decision" made last summer.

Rather has worked at CBS News for more than 40 years and made his name as a reporter covering the Nixon White House. His nearly quarter-century at the helm of the CBS Evening News is the longest at the helm of any U.S. network evening broadcast.

Rather's announcement comes eight days before his NBC rival, Tom Brokaw, steps down as Nightly News anchor and is replaced by Brian Williams.

The triumvirate of Rather, Brokaw and ABC's Peter Jennings has ruled network news for more than two decades. Rather dominated ratings after taking over for Cronkite during the 1980s, but he was eclipsed first by Jennings and then by Brokaw. His evening news broadcast generally runs a distant third in the ratings each week.