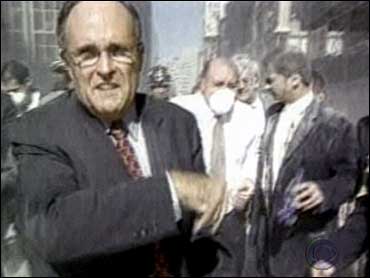 Why is Rudy Giuliani campaigning to be president? Fully a fourth of Republicans who back the former New York City mayor for president say it's because of his performance after the attacks of 9/11.

But for New Yorkers themselves, the Giuliani on Sept. 10, 2001, was a complicated figure, reports CBS News senior political correspondent Jeff Greenfield. More than half approved of the job he'd done, and the sense of a safer, cleaner city was widespread. But on the other hand:

"I think New Yorkers were exhausted by Rudy Giuliani by that day," says Andrew Kirtzman, a former city hall reporter who covered the mayor throughout his tenure.

The mayor's personal life had turned messy, including a separation from his wife - announced to her, as well, apparently - at a press conference.

High-profile police shootings of unarmed blacks had left some parents afraid for their own children.

"...not because they would necessarily do something wrong, but because you had such a police presence without control," says the Rev. Floyd Flake, a former U.S. congressman.

Giuliani's quality-of-life campaign was aimed at a seemingly endless list of targets.

"He was getting street vendors. He was getting jaywalkers," says Wayne Barrett of the Village Voice, one of Giuliani's severest critics.

"Giuliani is not a man for all seasons. He's a man for crisis," says Cooper Union professor Fred Siegel, one of the former mayor's admirers. "...if the waters are smooth, his oversize personality tends to capsize the ship that was stable."

Sept. 11 made Giuliani a national hero, America's Mayor he was called. But in New York, the impact was more specific. Some of the very traits that had been liabilities for Giuliani became important political assets.

His combativeness was now aimed at a genuinely significant enemy.

If his need to dominate the stage had put off some New Yorkers, even his critics welcomed it that horrible day.

"Suddenly we had a man who was reaching into our souls and saying the right things and hitting the right chords," says Barrett.

Some critics have questioned Giuliani's judgment in planning for a terrorist attack and caring for rescue workers afterwards.

Still, for most New Yorkers, what he said and did on that day cast him in a different and brighter light.

Why are gas prices going up again?