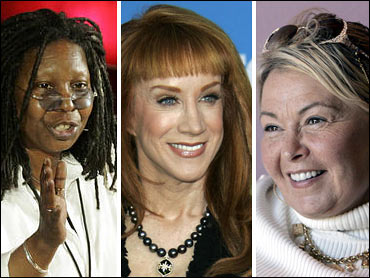 Now that Rosie O'Donnell has exited stage left, "The View" has to find someone to fill her seat and somehow match her water-cooler appeal. That won't be easy, but there's a lineup of famous ladies who could make worthy successors.

O'Donnell brought edge and excitement to "The View," lifting ratings and making enemies along the way. But in a move out of line with her fighting persona, she chose to depart the ABC talk show earlier than planned following an on-air confrontation with co-host Elisabeth Hasselbeck.

No possible contender is buzzier than Barr, who has said she wants the job. Griffin, whose acid-tongued bark is equal to her bite, would be another good choice, said In Touch magazine executive editor Dan Wakeford.

"She's very similar to Rosie in a lot of ways," Wakeford said. "She elicits strong reactions like Rosie. Love her or hate her, you have a reaction which makes great TV."

In that respect, Griffin — who put it all out there on her Bravo reality show — certainly delivers. But ... can she deliver viewers?

"After dealing with Rosie for a year, Barbara and the producers may prefer someone who's easier to manage and less dramatic," noted Wakefield, who said the less-controversial Shepherd is popular with the show's producers. Still, he said, "the most important thing is ratings."

Pop culture critic Ken Tucker is skeptical such hopefuls can match O'Donnell's TV talents: humor, controversy and "an ability to keep the show moving." The chatfest needs to "look for a different personality" post-Rosie, Tucker said.

He has an idea: Make co-host Joy Behar the moderator and hire the spunky Sykes as a panelist to replace Star Jones (who either quit or was fired last year, depending on whom you believe).

The likeable Behar, who has an eternal expression of bemusement, has "really come into her own in the past few months since Rosie's been on," said Tucker, editor at large for Entertainment Weekly magazine. "She is somebody who could be the moderator and the kind of voice of reason to keep things going when everybody starts talking over each other."

Behar illustrated that talent when she attempted to distract O'Donnell and Hasselbeck during last week's infamous spat, saying: "Who is directing the show? Let's go to a commercial."

Tucker's other favorite is Lauren Graham, who formerly starred on TV's "Gilmore Girls." The brunette beauty is "really smart," he said, and has been out of work — hey now! — since the mother-daughter dramedy closed this year.

As long as we're on the subject, there are others who should get a look. For your consideration: