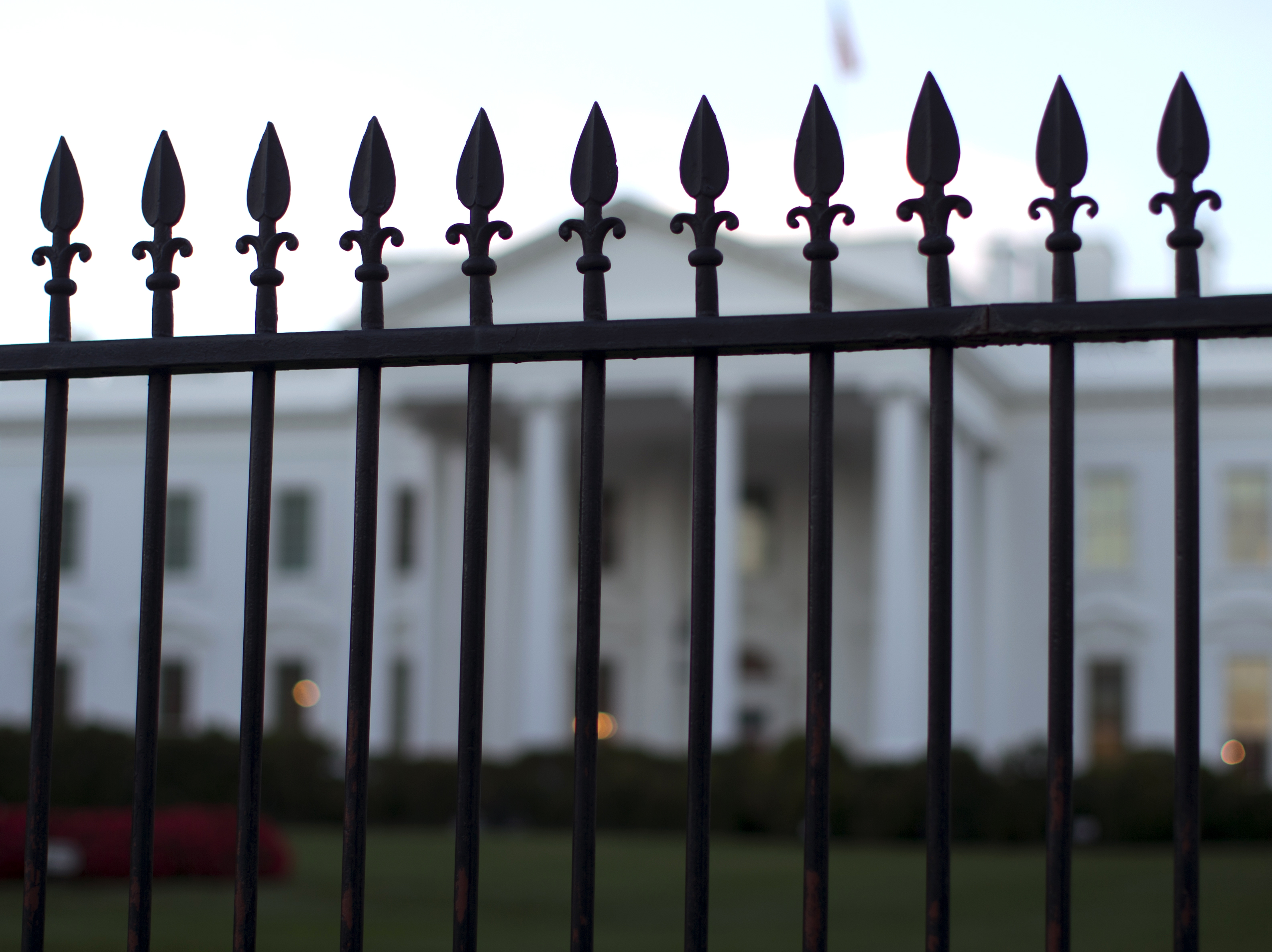 The 2016 presidential election was just 11 months ago, and President Trump has yet to finish his first year in office, but politicians -- including the president himself -- are already looking ahead to 2020.

President Trump filed paperwork for reelection on Inauguration Day, and -- as long as a political scandal larger than anything we've seen yet or the Russia investigation doesn't bring him down -- he's showing so far that he intends to run for a second term. Public opinion polls continue to show Mr. Trump's approval ratings are stuck in the high 30s, and since the beginning of his presidency, his average approval rating has never broken 50 percent, according to Real Clear Politics. The Democratic field is wide open to challenge the sitting president, and could very well resemble the vastness of the Republican field in early 2015. It could mix old presidential candidates with a number of newcomers.

Here are the possible Democratic hopefuls, three years ahead of next year's election.

Then-Vice President Joe Biden was a favorite to run in 2016. But the death of his son, Beau Biden, in 2015 hit him hard, and after weeks and months of consideration, the window for him to announce his candidacy closed. Biden, who left the White House with a 61 percent approval rating, according to Gallup, has expressed his regret for not running against Donald Trump in 2016. Many pundits believe he was perhaps the only Democrat who would have won handily.

"I regret it every day," Biden said in January 2016 about his decision to stay out of the race.

Last month, Biden's daughter, Ashley Biden, said her father is considering a 2020 run. Biden, who would be 78 by Inauguration Day 2021, hasn't totally ruled out the idea publicly.

"Could I? Yes," Biden said in a May interview at a hedge fund conference in Las Vegas. "Would I? Probably not."

Sen. Elizabeth Warren, D-Massachusetts, is also at the top of many lists for top Democratic contenders in 2020. Warren -- whose profile increased as she railed against Wall Street, the downsides of capitalism and decried the "1 percent" -- represents a populist wing of the Democratic Party. Many saw her populist tendencies as a sharp contrast to Hillary Clinton in 2016, although Warren ultimately decided not to run and backed Clinton, despite their differences. In the Senate, Warren has kept a high profile, although she hasn't definitively said she will run. Warren would be 71 on Inauguration Day in 2021.

If the 2016 election taught America's voters anything about Sen. Bernie Sanders, I-Vermont, it's that he doesn't give up without a fight. At 79 on Inauguration Day, the self-identified democratic socialist would be the oldest candidate. But that isn't likely to deter the man who gained a reputation for his bluntness, energy and unwavering ideals in the 2016 Democratic primaries against former opponent Hillary Clinton. If he and Warren both run, they would likely be fighting over the same progressive votes in the Democratic Party.

New Jersey's Sen. Cory Booker is barely a sophomore U.S. senator, but he's gained a name for himself in the last few years. Booker, a frequent TV guest who served as Newark's mayor before coming to Washington, hasn't ruled out a 2020 bid. In July, he told former top Obama aide David Axelrod on CNN he didn't know if he would run.

"I don't know what the future's going to bring," Booker told Cuomo. "I'm not making predictions, but I want to unleash the fullness of who I am right now, and I want to call out injustice where I see it."

At this point, Rep. John Delaney of Maryland is the only serious declared Democratic candidate for office. Delaney, elected to Congress in 2012, announced his candidacy in July. For many, it was the first time they'd heard of Delaney. Delaney's 6th District in Maryland stretches from D.C. suburbs, a heavily Democratic area, to Western Maryland, a much more conservative part of the state.

"To do this work with the commitment it deserves, I will not be running for reelection to the House of Representatives," Delaney said when he announced his candidacy. "No games, no cat-and-mouse, no backup plan at the 11th hour if a focus group goes badly."

Los Angeles Mayor Eric Garcetti is another possible Democratic contender whose names has been floated for both governor and president. His term doesn't end until 2022, but in an interview with the Los Angeles Times this week, he didn't rule out the possibility of running for either. He said only that he is, "committed to the people of Los Angeles."

New York Gov. Andrew Cuomo hasn't kept quiet about national issues, particularly when it comes to the president. In September, he called the Trump administration the "most ignorant" about the environment in history. He's also criticized the Trump administration for its slow response to Puerto Rico, as he spoke about the assistance New Yorkers are offering residents there. Cuomo worked in Bill Clinton's administration in the Department of Housing and Urban Development, and as New York's former attorney general. He hasn't said much of his future political ambitions, but it's still early.

At 41 on Inauguration Day, 2021, Rep. Seth Moulton of Massachusetts, would be the youngest Democratic contender. The former Marine Corps officer and Harvard Business School graduate serves on the House Budget Committee and is a ranking member on the House Armed Services Committee's Subcommittee on Oversight and Investigations. Moulton has said he wants to see new Democratic leadership before the 2018 elections. Democrats are already approaching him, he says. But he claims he's not running, at least, not now.

Virginia Gov. Terry McAuliffe, a longtime close friend of Bill and Hillary Clinton, probably has as good a shot at 2020 as any Democratic governor does. McAuliffe likely would have likely worked in Hillary Clinton's administration, but now that Mr. Trump is in the Oval Office, his options are still wide open in 2020. McAuliffe has had to govern in a divided purple state, where Republicans control the lower chamber of the legislature. But he's mostly managed to navigate his time in Richmond unscathed, and has decent approval ratings above 52 percent, according to a Real Clear Politics aggregation of polling. The former Democratic National Committee chairman, legendary in Washington for his fundraising skills, represents an establishment wing of the Democratic Party.

California's Sen. Kamala Harris may only be a freshman, but she's working hard to raise her profile. Harris, who was the first African-American and first woman attorney general in California, speaks up regularly on issues ranging from immigration to health care. Harris has also taken to the campaign trail for other Democrats in jeopardy in 2018, giving her a chance to raise her name in other states. Her support of more liberal issues like single-payer health care will likely make her a favorite among the progressive wing of the Democratic Party in 2020.

Sen. Chris Murphy of Connecticut told CBSN earlier this week that he is shutting the door on running, at least for now.

"I am not running for president. I am running for re-election to the Senate," Murphy said in an interview with CBS News Chief White House Correspondent Major Garrett and CBS News Political Director Steve Chaggaris on "The Takeout" podcast. That interview airs Saturday at 9 p.m.

But, as anyone in politics knows, that answer could very well change before 2020.

Former San Antonio Mayor Julian Castro told supporters at a latino voters summit in Texas that "he might" give a 2020 run a shot.

The former Secretary of Housing and Urban Development under President Obama told the audience that the country is in need of a "very different president" than who currently occupies the oval office and is going to spend 2018 weighing his options on a potential bid.

"We've had too much lying out of the White House," Castro said of President Trump.

The Los Angeles Mayor recently told the New York Times that he was considering a run in 2020. Garcetti told the Times he considers himself a part of an "impatient next generation" as Democrats weigh who will lead the beleaguered party in the next presidential election. He described his party as being as "weak as he could remember."

Garcetti won re-election with 81 percent of the vote in March. Before he became mayor, he served for 12 years on the City Council of LA.

Garcetti is both of Jewish and Mexican decent. His father, Gil Garcetti, is a two-term district attorney who prosecuted O. J. Simpson in the double-murder trial that ended in acquittal.