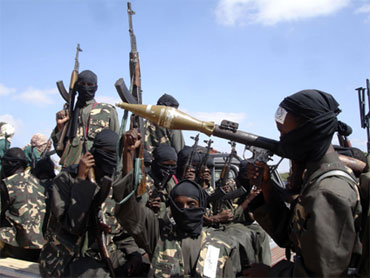 The group is on the U.S. State Department's list of foreign terrorist organizations, and according to a CBS News report last year, al-Shabab has publicly aligned itself with international jihad as espoused by al Qaeda and its leader, Osama bin Laden.

In a video posted on jihadist websites the groups declared, "We are your soldiers, O Osama."

Americans Among Dead, Injured in Uganda Bombings
Lured to Somalia for Terror Training
Uncovering the Roots of Homegrown Terrorism

Sunday's twin blasts in Uganda's capital was the group's first international attack, though the group counts militants from many countries among its ranks, including fighters from Kenya, Tanzania, Yemen, Sudan, Afghanistan, Pakistan, Iraq and the United States.

One of al-Shabab's field commanders, Omar Hammami (a.k.a. Abu Mansour al-Amriki), is an American from Mobile, Ala., who was raised a Baptist, converted to Islam and vanished, before reappearing in 2007 as a military commander in Somalia.

The Harakat al-Shabaab Mujahideen, or al-Shabab, is an off-shoot of the former Islamic Courts Union - a collection of sharia-based courts which formed an administration in opposition to the official Somali government.

Somalia, a country of 7 million people, has not had a functioning government since 1991, and has been mired in lawlessness, piracy and ethnic and religious conflict.

Beginning in the early 1990s, the ICU courts and their armed militia controlled much of southern Somalia, including the capital Mogadishu, but clashes with competing secular warlords, as well as with troops of the transitional U.N.-backed Somali Transitional Federal Government who were supported by the Ethiopian military. ICU forces eventually withdrew from Mogadishu.

But divisions about reconciliation led to the formation of al-Shabab, which continues to fight both the transitional Somali government and peacekeepers sent into the country as part of the African Union Mission to Somalia (AMISOM).

Their violence had caused the deaths of dozens of foreign aid workers, which led in January of 2010 led the United Nations' World Food Program to end operations in parts of southern Somalia controlled by al Shabab, moving staff members and supplies and ending aid distribution to about 1 million people.

It has also called for jihad against Ethiopia for assisting Somali's government, and Kenya for allegedly training Somali troops (which Kenya has denied).

Uganda may be seen as a target in Sunday's explosions because, in addition to Ugandan troops present in Mogadishu, Uganda also hosts Somali soldiers trained in U.S. and European-backed programs.

Al-Shabab has been suspect in countless acts of violence, though they have infrequently taken responsibility for specific acts of terrorism, including assassinations, bombings and beheadings.

In February and September 2009 al-Shabab members carried out suicide bomb attacks against an African Union military base and the AMISOM headquarters in Mogadishu. A total of 32 people, including 28 AU peacekeepers, were killed.

In January 2010 a 28-year-old Somali with reported ties to al-Shabab broke into the Aarhus, Denmark home of cartoonist Kurt Westergaard and tried to kill him, after the artist drew a cartoon of the prophet Mohammed with a bomb in his turban.

Since last year, however, some of al-Shabab's fighters have defected to the Somali transitional government, including some commanders. Interviews by former members have indicated their disillusion with the group, accusing it of giving "false interpretations" of Islam and of being guilty of extortion.

The group's full title is Arabic for "Movement of Warrior Youth," and its methods are distinctly aimed at the young. Like other terror groups, al Shabab seeks to draw disenfranchised youth to its cause by posting militaristic videos on the Internet.

Terror experts characterize Al-Shabab's as among the most violent jihadist videos.

As many as 20 young Americans have left Minnesota over the last two years and are believed to have joined the Somali terror group al-Shabab. At least three have died.

Last year with providing financial support to those who traveled to Somalia to fight on behalf of al-Shabab and attended terrorist training camps.

In June at John F. Kennedy International Airport as they were allegedly headed to Somalia to join al-Shabab.

"The Horn of Africa encounters a lot of difficulties with criminality, piracy, terrorism," Sajjan Gohel, director for international security at the London-based Asia Pacific Foundation told CBS News earlier this year. "All of those factors combined make it a very convenient place for terrorist groups to plot and plan, to recruit and train individuals."

"It's a concern that you have countries like Yemen and Somalia that have terrorist groups that are recruiting internationally for activities not just at a domestic level, but at the global level… and they can plot very dangerous global plots," says Gohel.