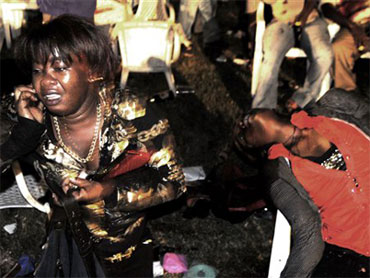 The death toll for attacks has risen to 74,

Americans Among Dead, Injured in Uganda Bombings
Who Are the Al-Shabab Militants?

Ugandan officials had suspected the Somali group of being behind the late Sunday attacks, which took place at two sites in Kampala as people watched the World Cup final.

Joann Lockard, a spokeswoman at the U.S. Embassy in Kampala, didn't have specific updates on the conditions of the injured, but advised any Americans still in the country to stay away from "large public gatherings as an added measure of security," during an appearance on CBS' "The Early Show." However, Lockard said there were no specific threats against Americans.

One of the targets was an Ethiopian restaurant - a nation despised by the al-Shabab militants.

Earlier Monday, Sheik Yusuf Sheik Issa, an al-Shabab commander, told The Associated Press that he was happy with the attacks in Uganda but refused to confirm or deny that al-Shabab was responsible.

"Uganda is one of our enemies. Whatever makes them cry, makes us happy. May Allah's anger be upon those who are against us," Sheik said.

The blasts came two days after a commander with the Somali group called for militants to attack sites in Uganda and Burundi, two nations that contribute troops to the African Union peacekeeping force in Somalia.

The attacks are the first time that the al-Qaeda-linked group has attacked sites outside Somalia.

The attacks appeared to represent a dangerous step forward by al-Shabab, analysts said, and could mean that other East African countries working to support the Somali government will face attacks.

"Al-Shabab has used suicide bombers in the past and shown no concern about civilian casualties in its attacks," said David Shinn, a former U.S. ambassador to Ethiopia and a professor at George Washington University. "Some elements of al-Shabab have also prohibited the showing of television, including the World Cup, in Somalia."

The attacks on two soft targets filled with civilians also raise concerns about the capabilities and motives of al-Shabab, which the U.S. State Department has declared a terrorist organization.

Blood and pieces of flesh littered the floor among overturned chairs at the scenes of the blasts, which went off as people watched the game between Spain and the Netherlands.

"We were enjoying ourselves when a very noisy blast took place," said Andrew Oketa, one of the hospitalized survivors. "I fell down and became unconscious. When I regained, I realized that I was in a hospital bed with a deep wound on my head."

At least three of the wounded were from a Pennsylvania church group who went to an Ethiopian restaurant in Kampala early to get good seats for the game, said Lori Ssebulime, an American who married a Ugandan. Three Ugandans in the group were killed when a blast erupted.

One of the wounded was 16-year-old Emily Kerstetter.

"Emily was rolling around in a pool of blood screaming," said Ssebulime, who has helped bring in U.S. church groups since 2004. "Five minutes before it went off, Emily said she was going to cry so hard because she didn't want to leave. She wanted to stay the rest of the summer here."

"Can you link it to the World Cup? I don't know... Whatever happened, linked or not linked, it is something that we all should condemn," he said.

Florence Naiga, 32, a mother of three children, said her husband had gone to watch the final at the rugby club.

"He did not come back. I learnt about the bomb blasts in the morning. When I went to police they told me he was among the dead," she said.

Invisible Children, a San Diego, Calif.-based aid group that helps child soldiers, identified the dead American as one of its workers, Nate Henn, who was killed on the rugby field. Henn, 25, was a native of Wilmington, Delaware.

"He sacrificed his comfort to live in the humble service of God and of a better world," the group said in a statement on its website.

Ugandan President Yoweri Museveni toured the blast sites Monday and said that the terrorists behind the bombings should fight soldiers, not "people who are just enjoying themselves."

"We shall go for them wherever they are coming from," Museveni said. "We will look for them and get them as we always do."

Ugandan army spokesman Felix Kulayigye said it was too early to speculate about any military response to the attacks.

Somalia's president also condemned the blasts and described the attack as "barbaric."

Al-Shabab, which wants to overthrow Somalia's weak, U.N.-backed government, is known to have links with al Qaeda. Al-Shabab also counts militant veterans from the Iraq, Afghanistan and Pakistan conflicts among its ranks. Their fighters also include young men recruited from the Somali communities in the United States.

Ethiopia, which fought two wars with Somalia, is a longtime enemy of al-Shabab and other Somali militants who accuse their neighbor of meddling in Somali affairs. Ethiopia had troops in Somalia between December 2006 and January 2009 to back Somalia's fragile government against the Islamic insurgency.

White House spokesman Tommy Vietor said the U.S. was prepared to provide any necessary assistance to the Ugandan government.

President Barack Obama was "deeply saddened by the loss of life resulting from these deplorable and cowardly attacks," Vietor said.

Officials said the Sunday attacks will not affect the African Union summit being held in Uganda from July 19-27. Many African leaders are expected to attend.