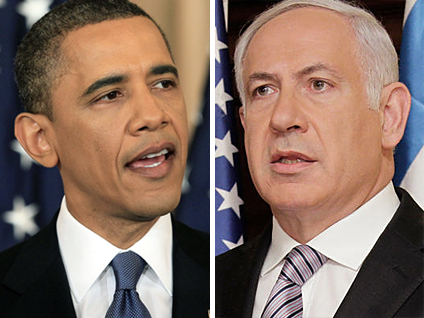 (AP) WASHINGTON — The White House on Tuesday denied reports of a rift with Israeli Prime Minister Benjamin Netanyahu, saying he and President Obama have reaffirmed the two countries' commitment to prevent Iran from obtaining a nuclear weapon.

Mr. Obama and Netanyahu spoke for an hour Tuesday night. The White House said in a statement later that the two men agreed to continue "close consultations going forward" regarding Iran's nuclear ambitions.

The White House denied published reports that Mr. Obama had rejected Netanyahu's request to meet with Mr. Obama in Washington next week. No such request was made or rejected, White House spokesman Tommy Vietor said.

The unusual, late-night announcement from the White House comes after Netanyahu criticized what he called the world's failure to spell out what would provoke a U.S.-led military strike against Iranian nuclear facilities. Netanyahu has urged the U.S. to set "red lines" for Tehran. The Obama administration has refused.

"Those in the international community who refuse to put red lines before Iran don't have a moral right to place a red light before Israel," Netanyahu said Tuesday.

Netanyahu signals a coming end to patience on Iran
Netanyahu: Nobody has "moral right to draw a red line for Israel" on Iran action
Obama administration: Israel pressuring U.S. on Iran "red lines" is "not helpful" or "useful"

Netanyahu says peaceful methods against Iran are not working, and he has warned repeatedly that Iran is getting perilously close to acquiring a nuclear bomb. His remarks have generated speculation Israel is readying to strike on its own to prevent that from happening.

Tehran insists its nuclear program is peaceful. Although the United States has accused Iran of trying to develop nuclear weapon capability under the cover of a peaceful program, the Obama administration has said it does not believe Iran has yet decided whether to build an atomic bomb — if it in fact develops the ability to do so.

Netanyahu's strong words risk antagonizing Mr. Obama in the midst of a closely fought a re-election campaign and could strain relations with the U.S., Israel's closest and most important ally. Relations between the two leaders have often been tense in the past.

Differences between the two counties over how to deal with Iran have boiled over into palpable tensions in recent weeks.

On Monday State Department spokeswoman Victoria Nuland said "it is not useful" to set deadlines or declare "red lines." She and White House press secretary Jay Carney also noted that Mr. Obama has stated unequivocally that the United States will not allow Iran to obtain a nuclear weapon.

On Tuesday, Nuland said the Iranian situation is a matter of "intense discussion" with Israel. She declined to elaborate, saying she did not want to conduct diplomacy in public.

Some U.S. officials have bristled at what they see is Netanyahu's attempts to exploit the U.S. campaign season to push Mr. Obama into a difficult position. The officials spoke on condition of anonymity because they were discussing a sensitive diplomatic matter.

The U.S. officials stopped short of accusing Netanyahu of taking sides in the election, but the Israeli prime minister has a longtime relationship with Republican candidate Mitt Romney and with Sheldon Adelson, a casino magnate and top donor to the Republican Party. Romney, who visited Israel in July, has repeatedly criticized Mr. Obama's handling of the nuclear issue.

Mr. Obama and Netanyahu have long had a rocky relationship because of policy differences and a lack of personal chemistry. In one notable incident, a frustrated Obama left a White House meeting with Netanyahu to go eat dinner with his family.

U.S. and Israeli officials confirmed Tuesday that Mr. Obama would not meet with Netanyahu when the Israeli leader goes to New York for the U.N. General Assembly later this month. Both sides cited scheduling issues and rejected suggestions that Netanyahu had been snubbed.