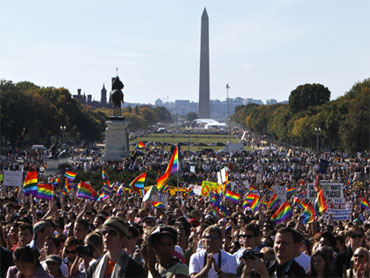 (AP Photo/Jacquelyn Martin)
During the presidential campaign, then-Senator Barack Obama promised to end "Don't ask, don't tell" - the ban on gays serving openly in the U.S. military - and promised to repeal the Defense of Marriage Act (DOMA), the 1996 federal law defining marriage as only between a man and a woman.

CBS News senior White House correspondent Bill Plante reports that because the president has yet to deliver on the promises he made to the gay community, gay rights advocates are concerned, so they gathered in Washington Sunday to remind him of these campaign pledges.

"He says all of the right things, but now it's time for him to put his money where his mouth is," said actress Cynthia Nixon.

to a dinner audience of gay civil rights advocates. "While progress may be taking longer than you like as a result of all that we face, and that's the truth, do not doubt the direction we are headed and the destination we will reach," he said.

But with health care to pass and a still-vulnerable economy, the gay community may have to wait - which some understand.

"Our community has gotten a little too tunnel-vision: 'Okay, you said you were going to do it, why haven't you done it?'" said actor and gay rights supporter Gavin Creel. "I believe in him."

Making good on his promises to the gay community won't be easy. Ending "Don't ask, don't tell" is opposed in Congress, with several members (including Republican Senator Lindsay Graham) saying the military needs to be consulted before ending the policy.

And when it comes to DOMA, the president will not only face a reluctant Congress and many religious leaders who are opposed to same-sex marriage but also states like California where same-sex marriage has been banned.

"The indication from the White House is they want to show the president is still committed to this, but that it's further down on the list of priorities," Dickerson told "Early Show" anchor Harry Smith. "He's got a lot in front of him, and the big question is how much political capital he'll put behind this. Will he pressure Congress? Will he pressure the Pentagon?

"There's just no indication right now that he's going to spend his political capital in that way."