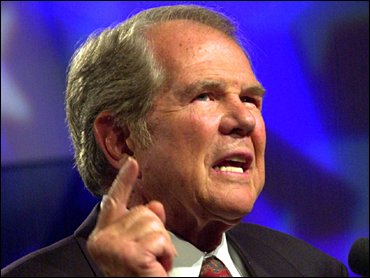 Religious broadcaster Pat Robertson says he warned President Bush before U.S. troops invaded Iraq that the United States would sustain casualties but that Mr. Bush responded, "Oh, no, we're not going to have any casualties."

White House and campaign advisers denied Mr. Bush made the comment, with adviser Karen Hughes saying, "I don't believe that happened. He must have misunderstood or misheard it."

Robertson's comments came to light on a day when Mr. Bush portrayed himself as an aggressive leader who understands the costs of the war on terrorism, while depicting opponent John Kerry as out of touch about the risks.

"The next commander in chief must lead us to victory in this war and you cannot win a war when you don't believe you're fighting one," Mr. Bush told hundreds of supporters in a farming community in Iowa, where he and Kerry are in a close race.

Robertson, in an interview with CNN that aired Tuesday night, said God had told him the war would be messy and a disaster. When he met with Mr. Bush in Nashville, Tenn., before the war Mr. Bush did not listen to his advice, Robertson said, and believed Saddam Hussein was an evil tyrant who needed to be removed.

"He was just sitting there, like, 'I'm on top of the world,' and I warned him about this war," Robertson said.

CBS News White House Correspondent Mark Knoller, who is on the campaign trail with the president, reports that Hughes said that Robertson was wrong in quoting Mr. Bush.

"It's not accurate," Hughes said. "It's not the kind of thing the president would say."

Hughes said political adviser Karl Rove was in the Feb. 10, 2003, meeting with the president and Robertson in Nashville, but Mr. Bush never said there wouldn't be casualties in Iraq.

"Obviously, we already had casualties in Afghanistan at the time. If you look at that, that (the comment) was not consistent with what was going on," she said.

White House spokesman Scott McClellan said, "Of course, the president never made such a comment."

Robertson released a statement about Mr. Bush late Wednesday in which he said, "I emphatically stated that I believe 'the blessing of heaven is upon him' and I am persuaded that he will win this election and prevail on the war against terror in order to keep America safe from her avowed enemies."

Earlier in the day, Mike McCurry, adviser to the Kerry campaign, said: "We believe President Bush should get the benefit of the doubt here, but he needs to come forward and answer a very simple question — was Pat Robertson telling the truth when he said he didn't think there'd be any casualties or is Pat Robertson lying?"

Robertson, the founder of the Christian Coalition and a candidate for the Republican nomination for president in 1988, said he supports Mr. Bush's re-election and believes the president is blessed by God.

In January, Robertson told viewers during his "700 Club" television program that God had told him Mr. Bush would win re-election in a blowout. In the CNN interview, Robertson said he believes Mr. Bush will win by a "razor-thin" margin but by a substantial Electoral College victory.