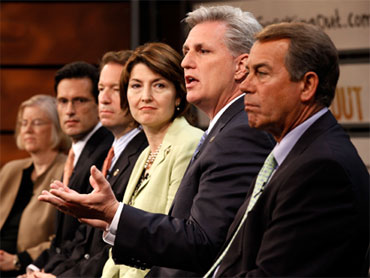 Republicans plan on unveiling their legislative agenda for the next Congress tomorrow, and the White House is trying to get out in front of the announcement by questioning whether it will meet the public's expectations.

The GOP's anticipated plan is intended to show the public that Republicans are more than the "party of no" ahead of the midterm elections. To emphasize their connection to voters, the GOP solicited ideas for their agenda from the public on a website they unveiled in May. "We want America to engage with us," House minority leader John Boehner said.

In a blog post today, White House communications director Dan Pfeiffer pointed out that in the "job creation" section of the website, the most popular idea is: "Stop the outsourcing of jobs from America to other countries that do not pay taxes into the U.S. and stop the tax breaks that are given to these companies that are outsourcing."

Pfeiffer says that the idea is "one that President Obama has been pushing - and Congressional Republicans have been opposing - for years."

He added, "Tomorrow we will find out whether Republicans are willing to do this, even after America spoke loud and clear on their own website."

Pfeiffer pointed to a handful of bills that Republicans overwhelmingly opposed which Democrats said would institute rules to keep jobs in the United States. For instance, Republicans opposed the $26 billion package passed to provide funding for education jobs and Medicaid. Democrats paid for the bill in part with $10 billion in new taxes on some U.S.-based multinational companies. They said the tax provisions would keep those companies from moving jobs offshore, but Republicans said the costs would be transferred to American workers.

The White House also pointed out that both Democrats and Republicans wanted to repeal a tax reporting requirement for small businesses which was put in place by the health care overhaul. House Republicans, however, ended up voting against repeal because Democrats wanted to make up for the lost revenue by raising taxes on international corporations.

Pfeiffer argued that Mr. Obama has "laid out a common-sense, comprehensive strategy to close egregious loopholes and reduce incentives for companies creating jobs overseas and instead, invest in tax cuts for companies creating jobs here at home." He pointed to the stimulus package as an example of investments in American infrastructure and industries designed to keep jobs in the United States.