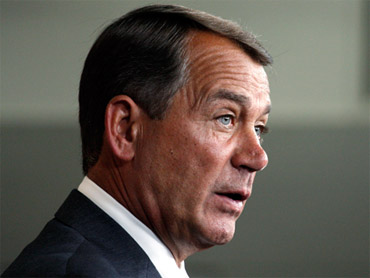 House Republicans unveiled a new website today that aims to get Americans involved in forming the GOP's policy agenda.

At an event down the street from the Capitol at the Newseum, Republican leaders said the new interactive site is historic in that it changes the way Americans are able to interact with members of Congress. House minority leader John Boehner said Americaspeakingout.com is an effort to "give the American people a megaphone to speak out by using the best technology available."

"We want America to engage with us," he added.

If you go to the website itself, it allows viewers to pick from one of five categories. They can submit ideas on American prosperity, fiscal accountability, American values, national security or they can come up with ideas on the topic of their choosing by selecting "Open Mic." Then, participants can vote on ideas that they'd like to see become law.

Some Democratic aides admitted that the website itself was a good idea, but DCCC spokesman Ryan Rudominer said in statement that "only House Republicans would think that talking with the American people is an 'unprecedented new initiative.'"

At the event, Republicans were on defense about how much money it cost and whether it's truly meant to gather policy ideas or if it's just a fancy campaign effort.

Republicans denied the initiative has anything to do with campaign 2010. If it did, that would require them to spend campaign money on the project. Instead, as it stands, it's the taxpayers who pay for it through the minority leader's office.

When asked about the cost, Boehner seemed to make the argument that it's not like any extra money was spent on the project.

"This is all paid for through our ordinary budgets" Boehner said. "There's no additional funds required."

Republicans would not say how much it cost to get the website up and running. Rep. Kevin McCarthy (R-Calif.) who was charged with leading the America Speaking Out project said that it "this doesn't cost much more than an average website."

Hosting the unveiling at the Newseum, plus the costs of murals and panels that served as a backdrop to the lawmakers, cost taxpayers around $8,500, according to sources familiar with the effort. Republicans liked the symbolism that the first amendment to the Constitution, which gives Americans the freedom of speech, is on the outside of the building. But the cost would have been significantly less if the event had been held at the Capitol.

Reporters also questioned whether the ideas will actually go anywhere. Especially since the session is rapidly coming to a close so there's not much time for Republicans to take ideas from the site and make them into legislation that could pass before October's target adjournment date.

Boehner, on the other hand, said he thinks legislation could be introduced in the coming weeks.

(CBS)
Jill Jackson is a CBS News Capitol Hill Producer. You can read more of her posts in Hotsheet here. You can also follow her on Twitter.