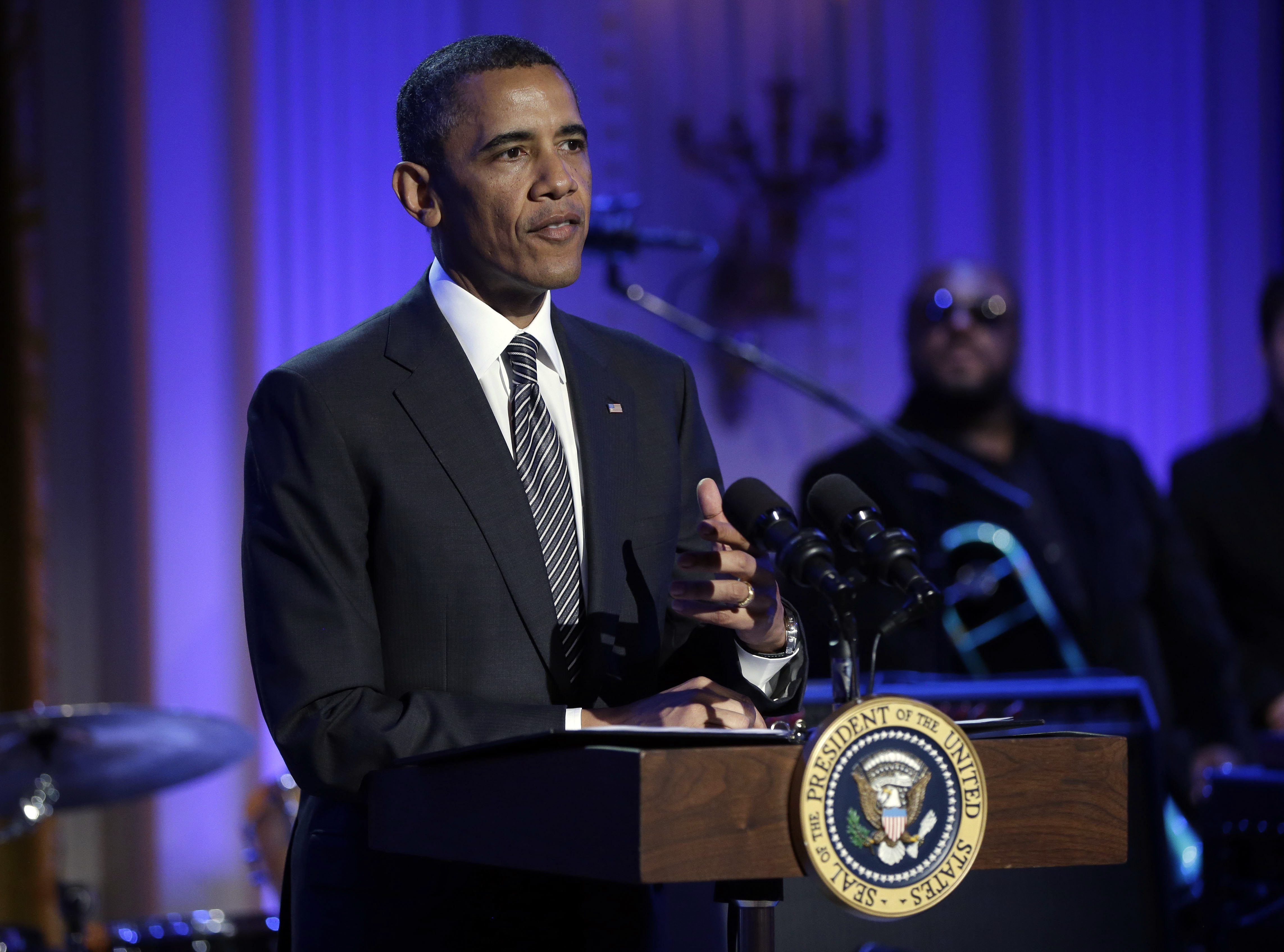 "Let's face it, who does not love this music?" he asked Tuesday, opening the night's concert in an East Room bathed in amber light and transformed by the addition of a stage and backup musicians.

"These songs get us on the dance floor," Obama said. "They get stuck in our heads. We go back over them again and again. And they've played an important part in our history."

Memphis, Tenn., was segregated in the 1960s, but blacks and whites came together despite the institutional racism to create a soulful blend of gospel and rhythmic blues music that sought to "bridge those divides, to create a little harmony with harmony," Obama said.

He noted that two of the night's guests, Booker T. Jones and Steve Cropper, helped form one of the city's first integrated bands.

"And that was the spirit of their music — the sound of Soulsville, U.S.A., a music that, at its core, is about the pain of being alone, the power of human connection, and the importance of treating each other right," Obama said. "After all, this is the music that asked us to try a little tenderness. It's the music that put Mr. Big Stuff in his place. And it's the music that challenged us to accept new ways of thinking with four timeless words: `Can you dig it?"'

And with that, Obama took his seat and the show opened with Sam Moore, half of the duo Sam & Dave, and "American Idol" finalist and gospel singer Joshua Ledet belting out Moore's "Soul Man," followed minutes later by Justin Timberlake and his rendition of Otis Redding's "Sitting on the Dock of the Bay."

Obama, first lady Michelle Obama and their daughters, Malia and Sasha, sat in the front row. The president and first lady at times clapped their hands and bobbed and weaved their heads to the pulsating rhythms.

The concert was the 10th in the "In Performance at the White House" series since Obama took office. Other performers included Alabama Shakes, Ben Harper, Cyndi Lauper, Charlie Musselwhite, Mavis Staples and William Bell. Queen Latifah was the host and Jones led the band.

Earlier in the day, Bell said the concert reaffirmed years of hard work that began in the 1960s when Stax Records was created in Memphis, and the label cranked out one soul and R&B hit after another for more than a decade.

Redding, Isaac Hayes, The Staple Singers, Bell and Sam & Dave were among the company's artists.

"As kids coming up, we didn't think it would last this long," the 73-year-old Bell said during a rehearsal break. He later performed his hit, "You Don't Miss Your Water."

Al Green had been scheduled to perform but, about an hour before the show, the White House released a statement from the singer's spokesman who said Green had suffered a back injury and would be unable to attend.

Hours before the show, Michelle Obama kicked off a workshop featuring Moore, Staples, Timberlake, Musselwhite and Harper for students from 16 schools and organizations in Virginia, California, Memphis, New York City, Maryland, Florida and Washington, D.C., who got to question the artists.

She noted Memphis' history as the birthplace of Elvis Presley's rock and roll and B.B. King's blues.

"And while you can hear both of those influences in Memphis soul, this music has a style and a story uniquely its own," Mrs. Obama said, before launching into the story of Stax Records.

She noted that the label also represented "somebody my husband thinks he sounds like" — Green. "Let's just tell him he does, OK? Since he is the president, we like to boost him up a little bit."

It was a reference to Obama singing a few bars of Green's "Let's Stay Together" during a Democratic fundraiser at New York's Apollo Theater in February 2012.

Obama also joked about his singing during his brief remarks opening the concert.

"Tonight, I am speaking not just as a president, but as one of America's best-known Al Green impersonators," he said to laughter.

At the workshop, Mrs. Obama also tried to encourage the students, including some aspiring musicians, by noting that it took years of perfecting their talent for the artists perched on stools in front of them to get where they are.

She recalled playing the piano as a young girl and said she regretted not sticking with it. But she said the skills one learns by studying music are useful in other areas of life.

"The discipline, the patience, the diligence I learned through the study of music, those are all skills that I apply every single day in my life," Mrs. Obama said. "I applied them as a student, as a lawyer, as a first lady, and definitely as a mother."

Since February 2009, "In Performance at the White House" has highlighted the music of Stevie Wonder, Paul McCartney, Burt Bacharach and Hal David, plus Hispanic music, music from the civil-rights era, Motown and the blues, Broadway and country music. The series itself dates to 1978.

The Memphis soul concert is set to air next Tuesday on PBS stations. It will also be broadcast at a later date over the American Forces Network for service members and civilians at Defense Department locations worldwide.