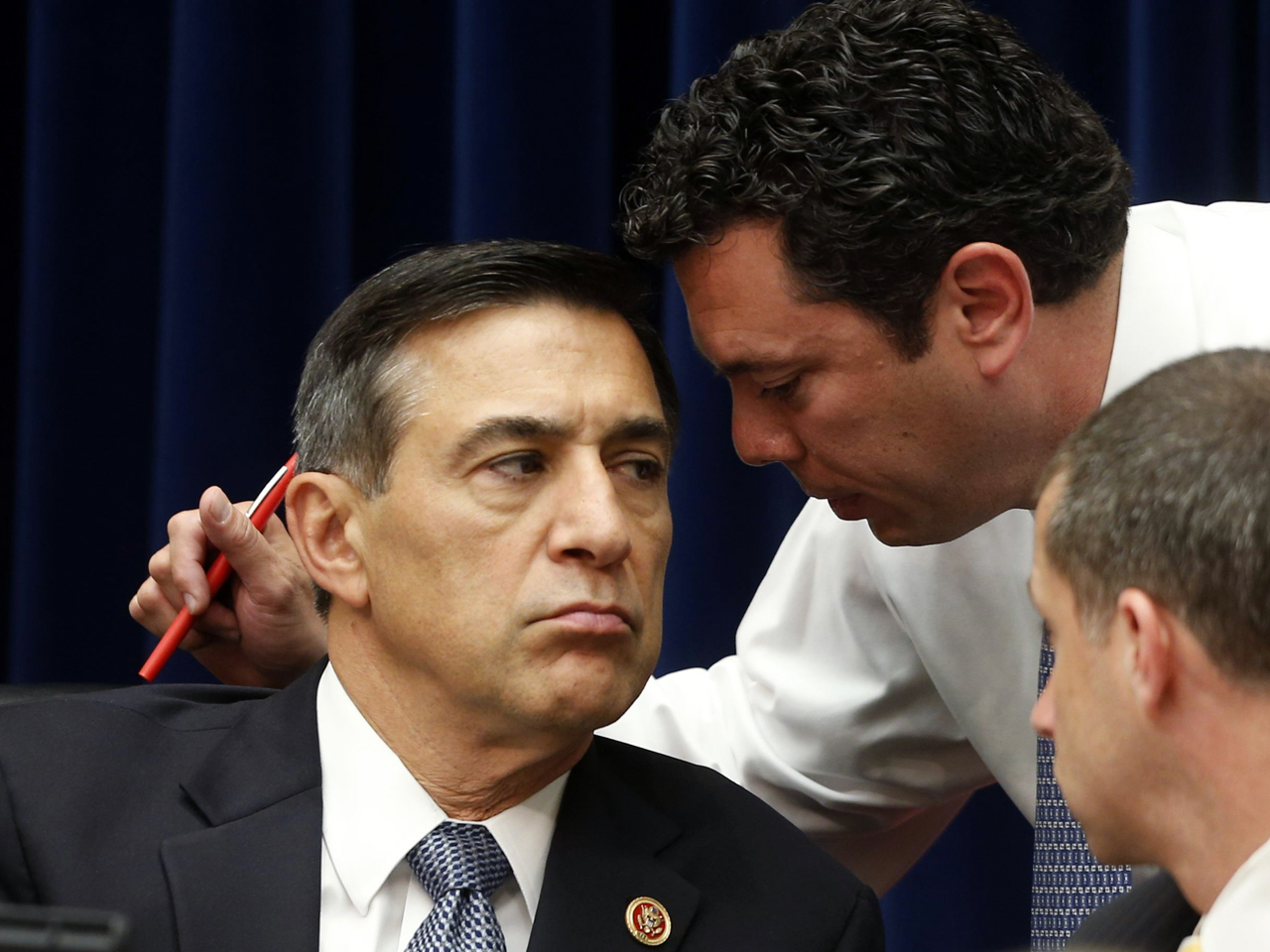 WASHINGTON The White House release of some 100 pages of emails and notes about the deadly attack on the U.S. diplomatic mission in Benghazi, Libya, last year has failed to satisfy congressional Republicans, who are demanding more information.

A spokesman for House Speaker John Boehner, R-Ohio, said Wednesday that Republicans hoped "this limited release of documents is a sign of more cooperation to come," while the chairman of the House Armed Services Committee pressed the Pentagon for more details about military orders around the time of the attack and what military aircraft were in the region.

Four Americans, including Ambassador Chris Stevens, were killed when militants struck the U.S. mission and CIA annex in twin nighttime attacks on Sept. 11, 2012.

Republicans have accused the Obama administration of misleading the American people about the circumstances of the attack, playing down a terrorist strike that would reflect poorly on President Obama in the heat of a presidential race. Mr. Obama has dismissed charges of a cover-up and suggested on Monday that the criticism was politically motivated.

Eight months after the attack, the issue remains a political winner with the Republican base as conservatives have been ferocious in assailing Mr. Obama. Rank-and-file GOP members and outside groups have pressured Boehner to appoint a special select committee to investigate. Instead, Republicans on five House committees are pursuing their own inquiries and promising to call more witnesses to testify publicly, including the veteran diplomat and retired admiral who led an independent review of the attack that widely criticized the State Department's insufficient security at the facility.

In the latest back-and-forth between the two leaders and a House Republican chairman, Thomas Pickering and former Joint Chiefs Chairman Mike Mullen sent a letter Thursday to the Oversight chairman saying they will testify in public but not submit to private interviews with staff investigators prior to their testimony.

"The public deserves to hear your questions and answers," Pickering and Mullen told Rep. Darrell Issa, R-Calif. They offered to appear before the panel either May 28 or June 3.

On CBS News' "Face the Nation" Sunday, Pickering told moderator Bob Schieffer that he informed Issa's committee ahead of its hearings last week on the attacks that he was "fully prepared to come at any time." Pickering said he received a response that Republicans didn't want to include him in last week's hearings.

The emails disclosed on Wednesday underscored the turf battle between the State Department and CIA, as neither one wanted to take the blame for the attack. They also showed the reluctance within the administration about saying anything definitively as officials scrambled to write talking points for lawmakers and U.N. Ambassador Susan Rice, who discussed the attack on Sunday talk shows.

Rice's widely debunked remarks that cited protests over an anti-Islam video as the cause of the attack fueled the criticism of the administration and later cost her a chance at becoming secretary of state.

According to the 99 pages of emails, then CIA-Director David Petraeus objected to the final talking points because he wanted to see more details revealed to the public.

In the original draft of the talking points, the CIA said the assault may have been "spontaneously inspired by the protests at the U.S. Embassy in Cairo and evolved into a direct assault against the U.S. Consulate," CBS News chief White House correspondent Major Garrett reports.

But the first version also acknowledged that "Islamic extremists with ties to al Qaeda participated in the attack" and that there had been "at least five other attacks against foreign interests in Benghazi" in the previous six months and that "we cannot rule out that individuals had previously surveilled the U.S. facilities."

Petraeus' deputy, Mike Morell, after a meeting at the White House on Saturday, Sept. 15, scratched out from the CIA's early talking point drafts mentions of al Qaeda, the experience of fighters in Libya, Islamic extremists and a warning to the Cairo embassy on the eve of the attacks of calls for a demonstration and break-in by jihadists.

Petraeus apparently was displeased by the removal of so much of the material his analysts had proposed for release. The talking points were sent to Rice to prepare her for an appearance on news shows on Sunday, Sept. 16, and also to members of the House Intelligence Committee.

"No mention of the cable to Cairo, either?" Petraeus wrote after receiving Morell's edited version, developed after an intense back-and-forth among Obama administration officials. "Frankly, I'd just as soon not use this, then."

The emails were partially blacked out, including removal of names of senders and recipients who are career employees at the CIA and elsewhere.

The emails show only minor edits were requested by the White House, and most of the objections came from the State Department. "The White House cleared quickly, but State has major concerns," read an email that a CIA official sent to Petraeus on Friday, Sept. 14.

Critics have highlighted an email by then-State Department spokeswoman Victoria Nuland that expressed concern that any mention of prior warnings or the involvement of al Qaeda would give congressional Republicans ammunition to attack the administration in the weeks before the presidential election.

That email was among those released by the White House, sent by Nuland on Sept. 14 at 7:39 p.m. to officials in the White House, State Department and CIA. She wrote she was concerned they could prejudice the investigation and be "abused by members to beat the State Department for not paying attention to agency warnings so why do we want to feed that either? Concerned."

After Nuland sent several more emails throughout that Friday evening expressing further concerns, Jake Sullivan, then-deputy chief of staff at the State Department, said the issues would be worked out at a meeting at the White House on Saturday morning.

A senior U.S. intelligence official told reporters Wednesday that Morell also didn't think it was fair to disclose the CIA's advance warning without giving the State Department a chance to explain how it responded. The official spoke on a condition of anonymity without authorization to speak about the emails on the record. Petraeus declined to be interviewed Wednesday.

The intelligence official said Morell was aware of Nuland's objections but did not make the changes under pressure from the State Department but because he independently shared the concerns.

That is contradicted in an email sent to Rice on Sept. 15 at 1:23 p.m. by a member of her staff whose name was blacked out. The email said Morell indicated he would work with Sullivan and Ben Rhodes, the White House deputy national security adviser, to revise the talking points. The intelligence official disputed that assertion and insisted Morell acted alone.

An email from Morell also says he spoke to Petraeus "about State's deep concerns about mentioning the warnings and the other work done on this."

The White House released the full set of emails sent to Congress under pressure in hopes of putting an end to the controversy that has dogged the administration for months. White House spokesman Eric Schultz said Wednesday that "these emails have been selectively and inaccurately read out to the media."

At a Capitol Hill hearing Wednesday, Attorney General Eric Holder said there has been "very, very substantial progress" in the investigation into who was responsible for the attacks in Benghazi. Earlier this month, the FBI said it was seeking information on three people who were on the grounds of the diplomatic mission when it was attacked.

Sen. Angus King, I-Maine, who sits on the Intelligence Committee, said of the emails, "I didn't find anything that looked like a smoking gun in terms of political cooking of the talking points. There is very little input from the White House."

But he said: "There are some things to criticize in here. The State Department looks like it is trying to avoid blame."