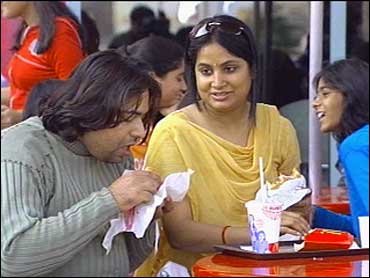 It's got the same old golden arches, the same efficient counter help slinging cheap eats, just the way they do everywhere from Poughkeepsie to Port Arthur. But in India, there's something missing at the world's fast food giant: hamburgers. That's right - McDonald's signature snack and its most recognizable symbol is nowhere to be found in one of the biggest countries on earth.

According to Amit Jatia, a JV partner of McDonalds India, "It is the only country in the world for sure that does not offer beef at all. Maybe other countries may do pork burgers, but in India, we definitely have no pork or beef at all." That's not to say Indian restaurants don't sell patties on buns. But instead of ground round, Indian burgers are 100 percent vegetarian - burger look-a-likes of potatoes, peas, and carrots, with a little Indian spice thrown in.

India is the world's vegetarian paradise. Nearly all of the one billion people living here eat meat only occasionally, or not at all. Beef never shows up on the menu. India is home to the Hindu religion, which preaches non-violence. Believers fear the karmic consequences of harming other creatures.

That's why cows are... well... sacred cows, pampered and allowed to wander at will through streets across the Indian subcontinent. They're never served up for dinner. Sheela Krishnaswamy, a nutritionist says "So that belief has been rooted so deep in the Indian mindset that most of us have continued to be vegetarians, and even those of us who have turned to non-veg foods don't eat it as often as people in other countries do."

Mention "fast food" to an Indian, and he's likely to think of this -- open-air restaurants that serve up giant pancakes with spicy fillings for a few cents. Even the big cheese at McDonalds India is a vegetarian. Jatia tells his co-workers, "What moms tell us is that typically it's very hard to get their kids to eat vegetables, rice on its own. But when it's put together in a patty, and then you get it in a burger format, then kids absolutely love it."

But what would most Indian kids know as a hamburger, isn't really a hamburger. Still, it doesn't make it healthy for you. Even veggie burgers get bad raps. "The patty is deep fried, there's loads of cheese and mayonnaise, the bun used is made with refined flour," says Krishnaswamy. "The only healthy part is the lettuce leaf and the tomato and the cucumber and what little salad is used."

So, could eggplant milkshakes and McTurnips be next?
By Lucy Craft