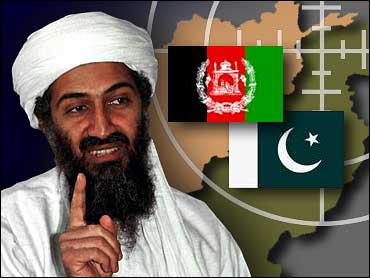 Technical analysis of his latest audiotape supports that belief, but as with every other piece of intelligence about bin Laden's whereabouts it is neither specific nor current enough to nab him.

Sources tell CBS News that the tape was transmitted over a phone line consistent with the quality of phone connections in Pakistan and Afghanistan, but there is no way of knowing where in those two countries the phone was located.

In September, Pakistani police arrested Ramzi Binalshihb, a member of the Hamburg cell that carried out the Sept. 11 attacks, just days after the release of another audiotape in which Binalshihb bragged about the attacks. However, U.S. officials say the timing was coincidental and the tape had nothing to do with his capture.

Binalshihb and other top al Qaeda operatives tried to lose themselves in the urban chaos of Pakistan's cities, but that would be harder for bin Laden to do because of his distinctive 6 foot 5 height.

By releasing only an audiotape, he has given the U.S. no clues about what he looks like after a year of being on the run. On the last videotape released of him, bin Laden looked gaunt and gray, but his appearance could very well have changed since then either because he's in disguise or in worse shape.

As Martin reports, the audiotape does make one thing clear: bin Laden is now confident enough about his personal security to tell the world he is alive. The U.S. can only hope he is overconfident and will make a mistake that gives his whereabouts away.

American officials have never confirmed rumors that bin Laden was wounded or suffering some kind of kidney ailment.

Tens of thousands of U.S., British, Canadian, Australian, Danish and other forces have worked in the region around Afghanistan over the last year — searching by land, air and sea for al Qaeda and former Taliban rulers who scattered in the first few months after the Afghan bombing campaign began last fall.

Meanwhile, the Senate's top Democrat said that the failure of U.S. authorities to capture bin Laden raises questions about "whether or not we are winning the war on terror."

Sen. Tom Daschle's remarks came as intelligence analysts concluded that a new audiotape almost certainly contained bin Laden's voice and is proof that he is alive.

"We can't find bin Laden, we haven't made real progress" in finding key elements of al Qaeda," the South Dakotan said. "They continue to be as great a threat today as they were one and a half years ago. So by what measure can we claim to be successful so far?"

President Bush bristled when asked if bin Laden, blamed for the Sept. 11 attacks, should have been captured sooner by U.S. and coalition forces. "We're making great progress in the war on terror. Slowly, but surely, we are dismantling the terrorist network," he said.

Daschle, meeting with reporters, said authorities should do a better job of finding where bin Laden's message came from.

Rumsfeld also said he thinks if bin Laden were alive and healthy he would have used a videotape rather than just an audiotape. He spoke Thursday on a radio town-hall meeting broadcast on "Infinity Radio Connect."

The CIA and National Security Agency were continuing their technical analysis of the tape.

"They can't get to 100 percent certainty, but they're sure," one official said. The official, who participated in a high-level briefing by CIA and NSA officials, said analysts were trying to determine whether bin Laden placed cryptic messages in the recording to order followers into action.

Homeland security director Tom Ridge, during an appearance before a State Department gathering Thursday, referred to "bin Laden's remarks over the past 24 to 48 hours." It was an offhanded remark, and it was not clear whether he was speaking on the basis of information not yet made public.

Later, Ridge spokesman Gordon Johndroe said he did not believe the homeland security director was attempting to confirm that the voice on the tape that of bin Laden. Johndroe did say, nonetheless, that the administration is concerned about the message on the tape.

"Whoever put the tape out has put the world on notice yet again that we're at war," the president said after a Cabinet meeting at the White House.

Attorney General John Ashcroft said special attention is being paid to "what might be signaled" on the tape, while FBI Director Robert Mueller said the existence of the tape "does and should put us on greater alert."

"There may be individuals in the United States we do not know about who could commit attacks," Mueller said.