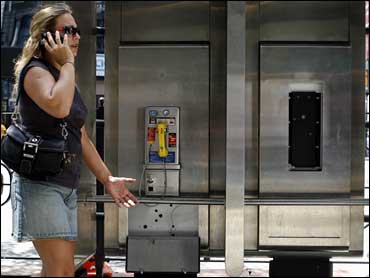 A stroll along Ninth Avenue in Manhattan reveals an ugly picture of the state of the pay phone these days.

The phones are sticky, beat up and scarred; some don't work at all. A child's change purse is stuffed on one phone ledge, along with a large wad of wrapping plastic. On a nearby ledge, an empty bottle of tequila sits in front of a hole that once held a phone. Empty cans of malt liquor sheathed in brown paper bags are a frequent sight.

With rising cell phone use and vandalism and neglect taking their toll, pay phones are disappearing around the nation. Consumer activists and advocates for the poor have protested the drop in numbers — saying that public phones are necessary in emergencies and represent a lifeline for those who can't afford a cell phone or even a landline.

"If you have a cell phone, you hardly look for the pay phones," said 25-year-old Sayed Mizan, listening to his iPod on a subway platform. "Besides, most of the time if you see the pay phones, they're either out of order or they're too filthy to touch."

Public phone operators insist that the bad reputation of pay phones is undeserved — though they do concede that they have removed many stands in recent years due to falling use.

Nationwide, the number of pay phones has dropped by half, to approximately 1 million, over the last nine years, according to an estimate by the American Public Communications Council, a trade association for independent pay phone operators.

"If a pay phone isn't covering its costs, we take it out," said Jim Smith, a spokesman for Verizon, which operates more pay phones in New York than any other company. "Toward the late '90s, the wireless phenomenon really got some momentum. That really put the squeeze on the pay phones."

The drop in pay-phone numbers angers advocates, who are quick to point out that cell phones — and sometimes any phones at all — are prohibitively expensive for many people.

A full 7.1 percent of the nation's households had no phone of any kind in November 2005, up from 4.7 percent three years earlier, according to the Federal Communications Commission.

For those people, and for the estimated 43 percent of U.S. residents with no cell phones (as of June 2004), pay phones are especially crucial, advocates say.

"Pay phones are a big deal for them," Sage Foster said of the homeless men and women he works with as a housing counselor. "For most of them, it's their only means of communication."

Pay phones also served an important purpose during two recent catastrophes in New York City — the Sept. 11 terrorist attacks and the 2003 blackout that darkened much of the Northeast. Cell phones failed during the crises, but many pay phones kept working because of their direct wiring and the phone company's backup power stores.

Ragan Belton remembers queuing up at a pay phone with 30 others to call her daughter on Sept. 11. 'God forbid there's an emergency and you have to go several corners to find one that's working," she said.

But public telephones were not always regarded as such a blessing.

In the late 1970s and early '80s, the phones became increasingly unpopular with community boards and local officials afraid of drug dealers. Eventually, Verizon changed all its phones to refuse incoming calls and removed phone booths, which had become grim repositories for trash and human waste.

"There was a time when all kinds of criminal elements would set up a sidewalk office using a pay phone," recalled Smith, the Verizon spokesman.

But the phone stands that replaced them are still magnets for trash and vandalism, and some still smell distinctly of urine.

"Some operators have just abandoned locations," said Willard R. Nichols, president of the independent operators' trade group. "If you've got vandalism and damage, it's very hard to keep the phone in service, because the repair costs are too high."

Despite the rising costs, it is unlikely that pay phones will be phased out entirely, according to industry representatives who say demand remains high in working-class neighborhoods and in locations like truck stops and airports.

Marilyn Ginsberg, a retired city employee who at 63 relies almost exclusively on her cell phone, says she hopes they are right.

"They're important to have around, if for no other reason than if there's an emergency, someone can dial 911," she said.

How real a risk is social media addiction?