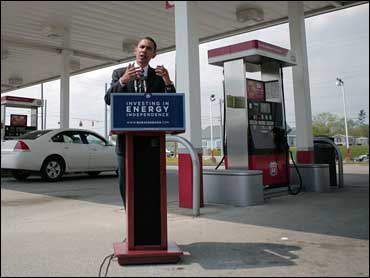 
The Democratic presidential campaigns of Barack Obama and Hillary Clintonseem to have become all about discussions of their personal qualities - honesty, experience, and judgment. The issues that have gained the most coverage and attention are not the ones that people cite as the most important. Controversies over who endorsed whom, or what a candidate may or may not have said, or even who each candidate knows and likes have somehow supplanted the war in Iraq, the mortgage crisis, and health care.

At least the rising price of oil did divide the two candidates in the most recent primaries, as they argued about whether or not the federal gas tax should be lifted for the summer months. This was originally proposed by Republican John McCain, but was endorsed by Clinton and criticized by Obama. And in the most recent primaries, the issue was directly related to the vote. In Kentucky, a state that Clinton won overwhelmingly, those who thought it was a good idea voted 77 percent to 20 percent for her. Those who did not like the idea divided evenly. In Oregon, Clinton received two-thirds of those who liked the gas tax holiday, while Obama won two-thirds of those who did not.

The latest national CBS News/New York Times Poll, taken in early May, also found a link between opinion about the gas tax holiday and a voter's choice for the Democratic nomination. Half of Democratic voters who said it was a bad idea supported Obama, while only 34 percent of them favored Clinton. Clinton led Obama, 57 percent to 36 percent, among those who thought it WAS a good idea.

But those bigger, longer-term issues, including Iraq, the mortgage crisis and health care, don't seem to matter as much in the Democratic contest. What about them? The national economy overshadows everything else for voters - in some states nine in ten Democratic voters say it is in bad shape - but the vote of those voters mirrors the vote overall. In Oregon, 59 percent of those saying they had been affected by the current economic slowdown voted for Obama. But so did 56 percent of those who had not.

Among primary voters in those states, whether they cited the war in Iraq, or health care, or the economy as the most important issue influencing their vote, there was no differentiation in candidate support. In Oregon, all three groups voted for Obama, and by roughly the same margins. In Kentucky, all three groups voted for Clinton, again by similar margins. It is as if, by the time these states voted, the big issues had turned into simple nominee preferences. That is: it was the candidate alone, not what he or she would do about the bigger issues that mattered most to voters in Oregon and Kentucky

And there is reason to think that issues will matter even more in the fall - at least for Independent voters. Party identification continues to be the best predictor of the November vote for both Democrats and Republicans, but issues do divide Independents: right now, Independents who think the gas tax holiday is a good idea support Republican John McCain 67 percent to 24 percent, while those who say it's a bad idea favor Obama 62 percent to 30 percent.

And the bigger issues of the economy and the Iraq war also matter to independent voters. Those who are having trouble keeping up with their bills are now telling us they prefer Obama over McCain, although the margin is barely in double-digits. Those doing better economically are more pro-McCain.

The war matters even more - and it appears to be one issue over which either nominee candidate could conceivably siphon off partisan voters from the other! Republicans overwhelmingly say the war in Iraq was the right thing to do, but one in four of them don't agree. In a fall horserace against Obama, McCain now gets nine out of ten votes from Republicans who supported starting the war; but only two-thirds from those who think it should not have been launched.

Democrats overwhelmingly say the U.S. should have stayed out of Iraq, though 22 percent of them disagree. Obama does 20 points worse among Democratic war supporters than he does with those who - like him - say the war should not have been started. It's worth noting that, in our recent polls, Obama gets less support from Democrats in a general election race against John McCain than Hillary Clinton does. Clinton's primary voters - at least for now - are almost twice as likely to say they'd defect to McCain if Obama becomes the nominee as Obama voters say they would defect to McCain if Clinton wins.

The "big" issues may have been subsumed by tactics and personality in the Democratic nominating contest, but they could come back with a vengeance in the fall!