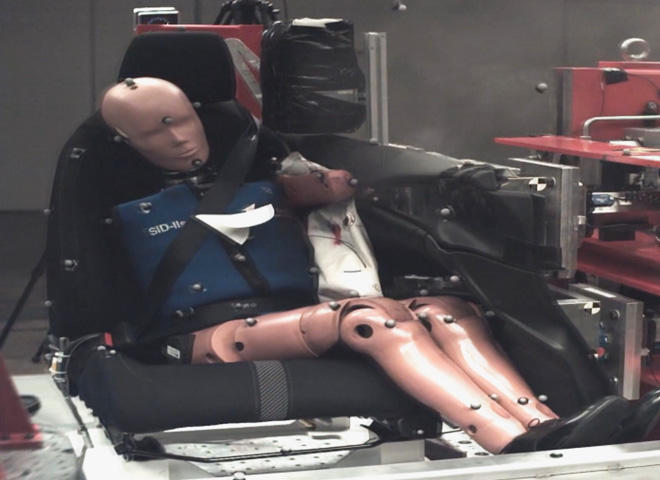 Seat belts are credited with saving nearly 14,000 lives last year. But they’re designed to keep the average 40-year-old man safe in a crash. And the amount of force required to keep a 40-year-old man in place can be enough to injure a smaller or older driver.

“I remember sitting there, and my body was just flipping back and forth,” said Pam Sohn, who ended up in a neck brace after a Jeep backed into her car.  Her seat belt kept her in the seat, but researchers believe it may have contributed to her concussion and back injuries.

“I probably would’ve went through the window or something the way I was moving around had I not had it on, yeah,” Sohn told CBS News correspondent Kris Van Cleave, but “it didn’t do what I thought it would.”

The seat belt Sohn and the rest of us use wasn’t designed for the 60-year-old’s 5’4” frame.

Professor John Bolte, of the Ohio State University College of Medicine, would like to see that change.

“If a car can drive today without a person controlling it, why can’t we have a safety system that can respond to better save someone?” he said.

Bolte is using crash tests to study the amount of force needed to protect those with more fragile frames, like smaller and older drivers.  The goal is to have seat belts that one day automatically adjust to the person they’re protecting.

“It’s going to take a lot more force to stop me from going into the steering wheel than it would a grandfather or grandmother,” Bolte said. “And so that force against my thorax is not going to cause rib fractures in me, potentially, but it is perhaps too much force for someone that is a little bit older.”

Crash tests can show how seat belts save lives. But when it comes to older drivers in particular, seat belts are also blamed for a higher rate of potentially serious, even deadly, chest injuries, as older drivers tend to be more easily injured in a crash.

Already, 43 million U.S. drivers are over 65; that’s nearly one in every five drivers. Their ranks are expected to swell by 77 percent by 2045.

“Seat belts do their jobs and they do their jobs very well -- let’s raise the bar higher,” Bolte said. “My job is to try to improve safety such that no one is being injured.”

Researchers stress everyone -- no matter their size and age -- should wear a seat belt, but two things you can do: If possible, adjust the height of the belt so it rests on the clavicle -- it’s much stronger than your ribs; and two, make sure you are 10 to 12 inches away from the air bag.