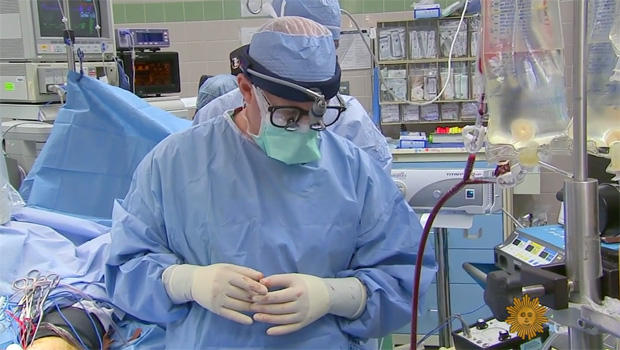 The Hippocratic Oath advises doctors to first do no harm ... words many doctors today are taking to heart when it comes to decisions about cancer treatment. Here’s Barry Petersen:

Lisa Mann was readying for a double mastectomy when she consulted Dr. Laura Esserman and heard two critical words.

For years the conventional wisdom has been to treat ANY cancer aggressively. But Dr. Esserman, a breast cancer surgeon and oncologist at the University of California San Francisco, is part of a new medical movement that urges patients to hit the pause -- not panic -- button when they get a breast cancer diagnosis.

“But we’re assaulted by this, ‘Find it first, get it out, that’s how you live,’” Petersen said.

“Okay, but we really need to change that whole framework,” Dr. Esserman said. “People say, ‘Oh, I can find cancer when it’s one cell.’ I said, ‘Please, don’t!’ Because we don’t need to know that, because the body may take care of it. There’s a lot of things the body takes care of.”

Virtually no one questions the value of screening to find cancers. But the debate about when, or if, to treat those cancers is getting louder.

“When we initially started to screen for breast cancer we were looking for small, invasive cancers with the idea that, if only we could find them early we would really dramatically reduce the chance of dying of breast cancer,” Dr. Esserman said. “The problem is, the people who have the very low-risk conditions don’t need the treatment, and by over-treating them you’re not improving people’s chance of survival.”

A group of medical researchers concluded that of every 2,000 women screened, one will avoid dying of breast cancer, but 10 women will be treated unnecessarily.

Dartmouth professor Dr. H. Gilbert Welch tracks cancer survival rates as screening has improved. “Ironically, the more over-diagnosis that a screening test does, the more popular it becomes, because there’s more people who feel they are ‘survivors’ because of screening,” Dr. Welch said. “Although it happens to be a cancer that was never going to bother them. They’ll never know that.”

He says thyroid cancer screening sent the number of new cases skyrocketing, but the death rate remains virtually unchanged. The same was true for melanoma.

And for prostate cancer, screening peaked in the 1990s, but the death rate barely changed.

“We’re moving much more towards the observation,” said Dr. Ian Thompson, an oncologist and president of the CHRISTUS Santa Rosa Hospital in San Antonio.

Petersen said, “In the end, if I’m the patient sitting across from you, the thing that you would have a hard time persuading me is it’s okay to live with cancer in your body. Is it okay?”

“Well, most of us have cancer in our body, so that’s the first thing,” Dr. Thompson replied.

In fact, some prostate cancers are so slow-growing that a man will likely die of other causes. And aggressive treatments carry their own dangers -- a biopsy risks infection. And surgery? Even worse.

“It can lead to sexual dysfunction,” said Dr. Thompson. “So a man could become impotent afterwards. Medications may not work for the potency. And that can affect marital relationships. And then radiation and surgery can affect urinary function.”

It’s the unintended consequence of a strange new frontier -- more ways to find cancer, but increasing concern that some of those cancers are not dangerous, a message over which patients and doctors can connect.

“I think the new role for the physicians is to be a coach, and to really try and help explain all this complicated data, and to help people make a choice that’s right for them,” said Dr. Esserman.

Richard Drew on photographing the "Falling Man" on 9/11

What's ahead for Congress in 2023? Republicans looking for payback