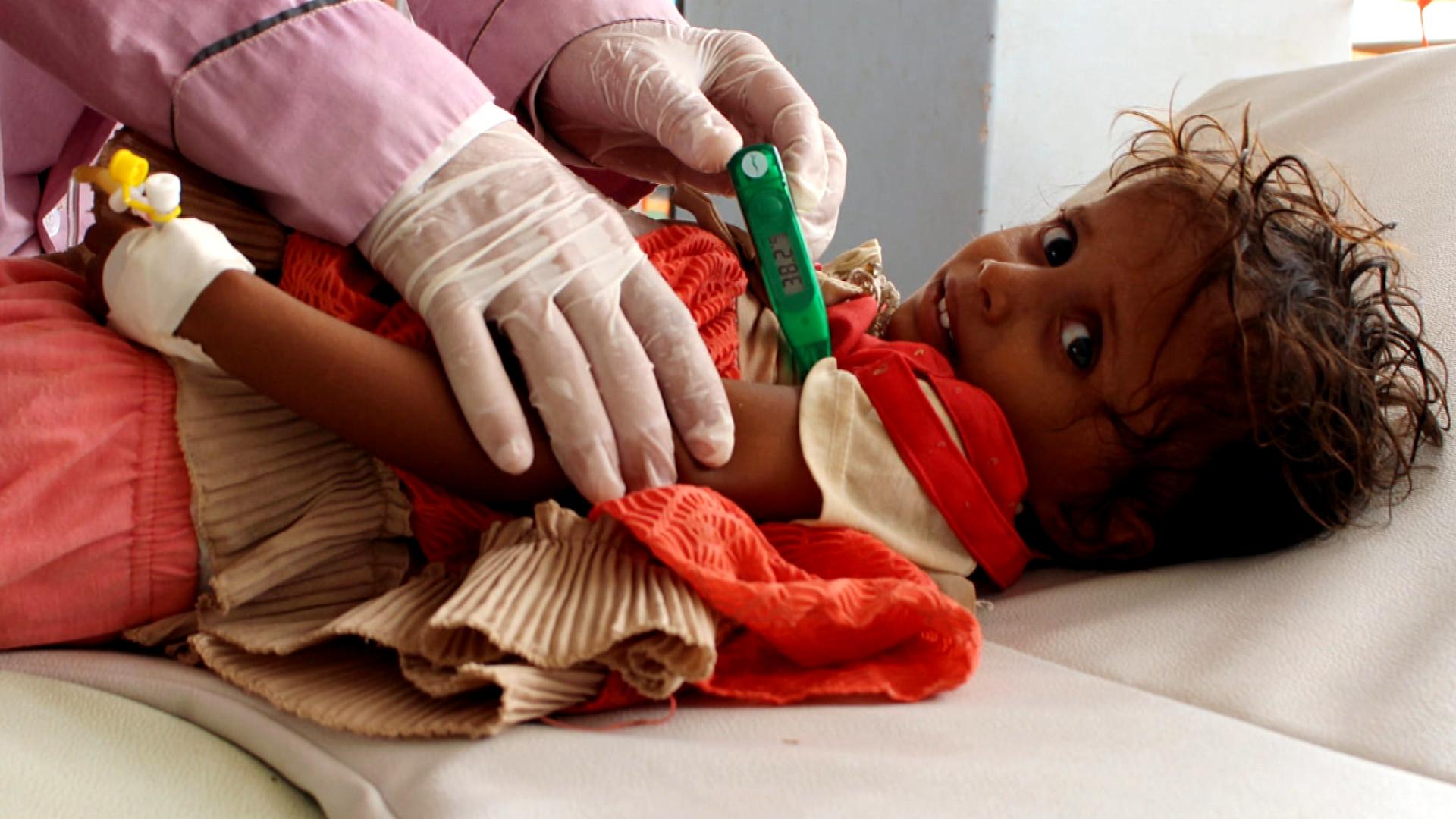 This month Saudi Arabia tightened a stranglehold on the neighboring country of Yemen and 7 million people face starvation. The Saudi blockade is an escalation in Yemen's civil war. The United Nations says the war has now become a "man-made catastrophe." You've seen very little of this because the Saudis prevent reporters from reaching the war zone. Recently, we were ordered off a ship headed to Yemen. Days later the Saudis gave us permission to fly there but, after our equipment was loaded and our boarding passes issued, the Saudis closed the airspace so the plane couldn't take off. Even so, we have managed to get pictures out of Yemen to show you what the Saudi government does not want you to see. This will be hard to watch, but 27 million people in Yemen pray you will not turn away.

Hungry children cry. But there are no tears at the limits of starvation. Wasting bodies cannot afford them. This is the Al Sabeen Hospital in the Yemeni city of Sana'a. Ibtisam is two and a half. She weighs 15 pounds. Haifa is seven. She weighs 11 pounds. The images, and stories from the hospital, were sent to us by people that we hired inside Yemen. One child dies every ten minutes in the country according to the U.N..

David Beasley: It's just desperation and death. It is as bad as it gets. I don't know if I've ever seen a movie this bad.

Scott Pelley: We were headed into Yemen with the World Food Programme, the Saudis gave us permission to come, and then when we arrived they wouldn't let us into the country. What do you think they didn't want us to see?

David Beasley: I don't understand why they won't allow the world to see what's taking place. Because I think if the world sees the tragedy of this human sufferin', number one, the world will step up and provide the support financially for innocent children to eat. But when you get on the ground and see what I see, you see is chaos, is starvation, is hunger, and it's unnecessary conflict strictly man-made. All parties involved in this conflict have their hands guilty, the hands are dirty. All parties.

"We're on the brink of famine. If we don't receive the monies that we need in the next few months, I would say 125,000 little girls and boys will die."

In essence, the fight is between the two main branches of Islam. The Shia branch occupies much of the West, the Sunnis most of the South and East. Saudi Arabia, leader of the Sunni world, began airstrikes against Shia rebels, more than two years ago. The rebels, who are known as Houthis, are supported by Saudi Arabia's arch enemy, Iran, the leader of the Shia world.

Houthi rebels have plenty of blood on their hands, including the deaths of 1,000 civilians. But the U.N. says the Saudi coalition has killed more than 3,000 civilians; bombing schools, hospitals and Al Kubra hall, scene of a funeral last year. 132 Civilians were killed, nearly 700 wounded. Still, the deadliest weapon in Yemen is a blockade holding up food, fuel and medical aid.

David Beasley: We can't get our ships in. They get blocked

Scott Pelley: Who blocks the ports?

David Beasley told us the Saudis bombed the cranes that unload ships. The U.S. sent replacement cranes. But the Saudis won't let them in.

David Beasley: We ask any, any parties engaged in this conflict to respect humanitarian law, respect the rights of innocent people and give us the access that we need to provide the help that's needed.

Scott Pelley: It sounds like the Saudis are using starvation as a weapon.

David Beasley: I don't think there's any question the Saudi-led coalition, along with the Houthis and all of those involved, are using food as a weapon of war. And it's disgraceful.

The U.N. World Food Programme is the largest humanitarian aid agency. The U.S. is its biggest donor, so the director is most often an American. Beasley was once governor of South Carolina.

David Beasley: We're on the brink of famine. If we don't receive the monies that we need in the next few months, I would say 125,000 little girls and boys will die. We've been able to avert famine, but we know three things that are happenin'. We know that people are dying. We know that people are wasting. And we know that children are stunting. We have a stunting rate in Yemen now at almost 50 percent. That means they're smaller, the brains are smaller, the body's smaller because they're not getting the food or the nutrition they need.

The World Food Programme's Stephen Anderson is trying to move millions of pounds of food to Yemen from an African port in Djibouti.

Stephen Anderson: The World Food Programme is mobilizing food for seven million people. Now what that looks like is a 110-pound bag of wheat flour. We're aiming to provide two million of those every month to the people of Yemen.

Scott Pelley: How long can you keep that up?

Stephen Anderson: Well, we're desperately praying for peace. Because that's the only sustainable way of really rebuilding the situation our stated objective is to try to prevent a famine from occurring.

While facing imminent famine, the people of Yemen are also suffering one of the biggest cholera epidemics in history. Nearly a million have been infected with the bacteria which inflicts diarrhea, dehydration and sometimes death. The disease thrives in dirty water. And water treatment and sanitation have collapsed in Yemen's cities.

Scott Pelley: What do you have to have to stop the epidemic?

Nevio Zagaria: We should have peace. This is what we need to stop this epidemic. So we cannot solve the problem of cholera if we do not have a proper safe water supply, if we do not have proper sanitation. If we do not have the sewage treatment plant in the main town functioning and stop because it runs out of fuel as it happened at the beginning of this epidemic in the north of Sana'a for three or four months.

Scott Pelley: The main sewage plant in Sana'a ran out of fuel and didn't run for three or four months?

About two million Yemenis have been forced from their homes by the war and there's been a big exodus of refugees that the world doesn't know very much about. Many of them have come 25 miles across the Red Sea to a refugee camp in the African nation of Djibouti. It is a testament to how bad things are in Yemen that the refugees believe that this place is so much better.

We've seen a few refugee camps in our time but this may be the most desolate with a drought of life and flood of sun. One worker told us we were smart to come in fall when it cooled off to 110.

Scott Pelley: How long have you been here?

Ali Shafick was once an architect in the Yemeni capital. His home was destroyed. He's alone here. And his despair was almost like madness.

Ali Shafick: To be jobless in this camp is very sad. The time is going slowly, very slowly.

Scott Pelley: The heat must be unbearable.

Scott Pelley: And yet you do.

This mother, Ameena Saleh, told us her family left after Saudi led airstrikes killed more than 70 people in her town.

The planes would fly above us and fire rockets and missiles she told us. At night there was no sleep, they were holding the young ones. She said that her older son was saying 'we are going to die.' She told us we saw people die right in front of us.

Scott Pelley: A little while ago we heard a rumble from the direction of Yemen. That's the bombing, isn't it?

Yes, her husband said, it's near.

Scott Pelley: What do you think when you hear that?

Strong fear, she said. She said the terror is still inside us from the rockets, missiles and planes.

Scott Pelley: What lies ahead for these people, given where we are today?

Ayman Gharaibeh: Remember, the conflict is going into a third year, some people has been displaced for literally three years or going into their third year.  I honestly do not see any silver lining anywhere on the horizon that this is gonna end soon. And I'm afraid the humanitarian situation will continue to deteriorate. And we would go from a displacement to a famine, as happened, to cholera, and God knows what's next.

"All the children are gonna be dead. It's terrible."

The Saudi intervention in Yemen began with the rise of 32-year-old Crown Prince Mohammed bin Salman, he's the son of the king and he's the defense minister. Salman is quickly reforming the kingdom's fundamentalist society. Recently, he lifted the ban on women drivers. This month, he arrested 200 Saudis including princes and media owners. He says it's a crackdown on corruption. His critics believe he's silencing his rivals. Salman's campaign in Yemen has now landed Saudi Arabia, for the first time, on the U.N.'s blacklist of nations that disregard the safety of children in war.

The Saudis have pledged $8 billion in humanitarian aid for Yemen, but they've delivered very little of that. The head of the Saudi humanitarian agency says that its aid to Yemen is, quote, "way beyond any damage caused by any attacks."

Scott Pelley: You met with some government officials involved in all of this, what kind of dialogue did you have with them?

David Beasley: Well we met with officials on all sides. They said all the right things. And we come back, everything that they agreed to on visas and access, so that we can get the equipment we need in, so we can deliver the food where we need to deliver it, and the technology and the health product -- you know -- terrible. The conditions are deteriorating in an unprecedented way and none of the commitments that were made, by any and all sides, have been fulfilled.

Scott Pelley: What future do you see for Yemen?

David Beasley: I don't see a light at the end of this tunnel. There's gotta be a big change. As the World Food Program, I've got my mandate to feed people. But also as a U.N. leader, I call upon the leaders of the world to bring the pressure to bear whatever's necessary to get the Saudi-led coalition, the Houthis and all involved to the table and end this thing. You keep goin' like you're goin', there's not gonna be anybody left. All the children are gonna be dead. It's terrible.

Yuval Noah Harari on the future of the human race