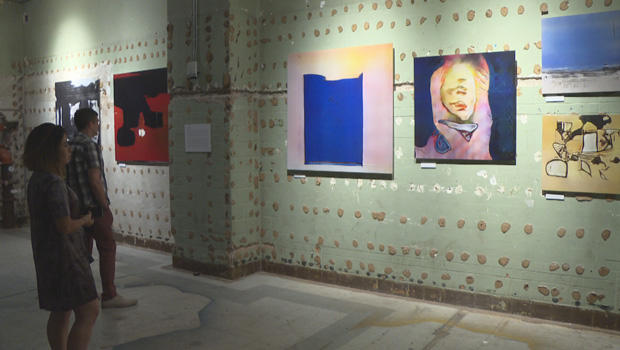 A classic photograph, a revered painting … just two examples of human genius that no machine could ever match. Or COULD it? Here's David Pogue:

For years, the common wisdom about robots was that they're taking over repetitive, routine jobs. But at least they're not creative. We'll always have art and music to ourselves, right? Wrong.

Douglas Eck works at Google. He created the Magenta project, dedicated to using artificial intelligence, or AI, to make art and music.

Eck is using a form of AI called Machine Learning. His software analyzed thousands of sketches done by people; and now, it knows how to complete a drawing itself.

"Why don't you start drawing some rain, and it'll complete your thought for you," Eck asked Pogue. "And there it goes. And it's making it rain for you. "The idea [is] that this model has figured out that once it sees a cloud, we're gonna add rain."

"And if I made little, teeny drops?"

"It's gonna match the size of your drops." And it did.

But Eck's first love is music. And he's applying this same machine learning method to complete a musician's thoughts. This time, he fed his software the data from hundreds of live piano performances, so it could learn to compose its own songs, then had a programmable piano play a piece the computer had created.

He insists that the idea here isn't to replace human composers; it's to help them – for example, when you get writer's block and need a little creative boost.

"It's your idea, and then what the computer is doing via the machine learning is generating some new possible endings for you," Eck said.

But the genie may already be out of the bottle.

Sam Estes and Michael Hobe worked on film scores for years before they and a buddy founded Amper Music. Their software is aimed at filmmakers who might not have enough time or money to hire real musicians. They say they taught their software human concepts like music theory, rhythm and pitch.

They started by making individual recordings, one note at a time, of every instrument, playing every note of the scale, at every volume level. From there, the software can piece together original film music in any style you request.

"It will write the music, perform the instruments, and then produce the overall audio," Hobe said.

Pogue challenged their software to compose music for a short cinematic scene: "I'm gonna act out a scene from a movie that's six seconds long," he said, "and it's me being a thief in your office. And I'm going to steal this piece of kryptonite (actually a table lamp)."

Estes selected "dark dramatic" in the program: "And we'll see what it comes up with."

And just like that: Background music, composed just for the occasion. No human composer required.

"Well, your goal might not be to displace composers, but of course, you're going to," Pogue said.

"Yes, unfortunately there is, with any disruption in a space, you're gonna displace some people."

AI may also start to cause disruptions at art galleries.

Professor Ahmed Elgammal at Rutgers University has spent five years teaching his AI program to create original artwork – once again, through machine learning. He fed it 80,000 pieces of art from the last 500 years. Now, he presses the Enter key, and boom: The software creates new, original works of art.

"The machine just take the images and it tries to learn by itself what makes good art," Elgammal said.
But are they good enough to fool us humans? The professor gave Pogue a test, of 20 paintings, to see if he could tell which were done by people, and which by AI.

He failed the test. Almost everyone does. Two thirds of the time, Pogue couldn't tell which paintings were done by human artists.

But does it matter? One AI-created artwork sold at auction for $16,000.

Google's Doug Eck says that real art still has to come from people. "It's immediately boring to sit back and say, 'Hey, I've got this thing that makes music. Let's me push the button one more time.' It just doesn't engage us. That's because that's not what art is about. Art is about us communicating with each other. We need to be there."

The murder of Emmett Till
Thanks for reading CBS NEWS.
Create your free account or log in
for more features.
View CBS News In
CBS News App Open
Chrome Safari Continue
Be the first to know
Get browser notifications for breaking news, live events, and exclusive reporting.